Zip thru then toss 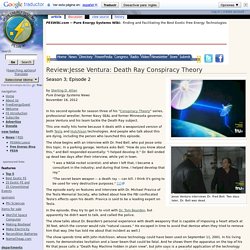 Allan Pure Energy Systems News November 16, 2012 In his second episode for season three of his "Conspiracy Theory" series, professional wrestler, former Navy SEAL and former Minnesota governor, Jesse Ventura and his team tackle the Death Ray subject. This one really hits home because it deals with a weaponized version of both Tesla and Hutchison technologies.

Jesse Ventura interviews Dr. The show begins with an interview with Dr. "I was a NASA rocket scientist; and when I left that, I became a consultant in the industry; and during that time, I helped develop that ray. " "The secret beam weapon -- a death ray -- can kill. The episode early on features and interview with Dr. In the episode, they try to get in to visit with Dr. The show talks about Dr. The show spends time with John Hutchison, whose technology could have been used on September 11, 2001. Arielle Louise (sp?) Mexico's Drug War: General Violence. Here is the official statement from ICE, issued on Feb. 15: "Earlier this afternoon, two U.S. Immigration and Customs Enforcement (ICE) special agents assigned to the ICE Attaché office in Mexico City were shot in the line of duty while driving between Mexico City and Monterrey, Mexico, by unknown assailants. ICE is working with the U.S. State Department, Mexican authorities and other U.S. law enforcement partners to investigate the shooting. Our thoughts and prayers are with our colleagues. " News reports on their websites and Twitter had little to add.

I got several questions from readers on my Facebook Fan Page asking what ICE agents are doing in Mexico. "To further enhance the MLS, the ICE Mexico Money Laundering Vetted Unit (MLVU) was created in 2002. "The ICE Attaché Mexico City also conducts significant investigations of “Politically Exposed Persons” (PEP) and Money Remitters (Casas de Cambios). The next major question becomes, what is the US government's response going to be? How Drugs Helped Invent the Internet & The Singularity: Jason Silva on "Turning Into Gods". Against Forrest Gump. You'll never think the same way again. . . The Revelation. A hexagram is two equilateral triangles superimposed over each other. 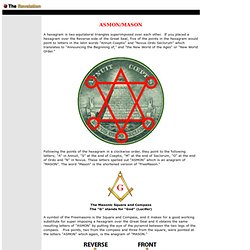 If you placed a hexagram over the Reverse side of the Great Seal, five of the points in the hexagram would point to letters in the latin words "Annuit Coeptis" and "Novus Ordo Seclorum" which translates to "Announcing the Beginning of," and "the New World of the Ages" or "New World Order. " Following the points of the hexagram in a clockwise order, they point to the following letters; "A" in Annuit, "S" at the end of Coeptis, "M" at the end of Seclorum, "O" at the end of Ordo and "N" in Novus.

These letters spelled out "ASMON" which is an anagram of "MASON". The word "Mason" is the shortened version of "FreeMason. " The Masonic Square and Compass The "G" stands for "God" (Lucifer) On the following map, you can see an upside down star (Satanic symbol) with the southern most point touching the White House. Washington D.C. ROTHSCHILD Castle, Château de Ferrières In France Sports Design Of Solomon's Temple - Danny Wilten. - StumbleUpon. This is about the synchronicity number 23, and thus about the phenomena of synchronicity in general. 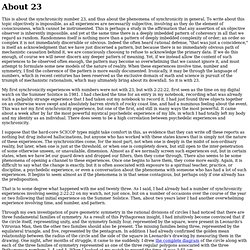 To write about this topic objectively is impossible, as all experiences are necessarily subjective, involving as they do the element of consciousness, which cannot be instrumented. This is perhaps a study in the affirmation that any assertion of an objective observer is inherently impossible, and yet at the same time there is a deeply imbedded pattern of coherency in all that we regard as random. Randomness itself is nothing more than a pattern of deeply imbedded complexity of order; an order so complex it is not immediately discernible or obvious. Indeed the often heard rational defense, "that was just a coincidence," is itself an acknowledgment that we have just discerned a pattern, but because there is no immediately obvious path of mechanistic causation behind it, we are consciously choosing to refuse to acknowledge the primary data.