Is Slavoj Zizek a Left-Fascist? Is this idol of the liberal Left a sort of fascist? 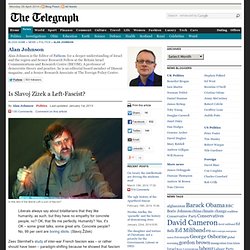 Liberals always say about totalitarians that they like humanity, as such, but they have no empathy for concrete people, no? OK, that fits me perfectly. Humanity? Yes, it's OK – some great talks, some great arts. Concrete people? Zeev Sternhell’s study of inter-war French fascism was – or rather should have been – paradigm-shifting because he showed that fascism was “neither Left not Right.” La dernière interview de Žižek sur la souveraineté, les migrations et le capital mondial, avril 2017. Slavoj Zizek The Pressure of Meaning.

‘Terror! Robespierre and the French Revolution’ feat. Slavoj Žižek. Slavoj Žižek introducing: Laibach in North Korea. Slavoj Žižek: »Rage, Rebellion, New Power« Zizek! Slavoj Žižek. The Buddhist Ethic and the Spirit of Global Capitalism. 2012. Zizek! - documentary by Atra Taylor. Slavoj Zizek in Examined Life. Slavoj Zizek: Philosophy - Key Ideas. • Key Ideas • Books: A Summary He was born the only child of middle-class bureaucrats (who hoped he would become an economist) on 21 March 1949 in Ljubljana, the capital of Slovenia and, at that time, part of Yugoslavia. 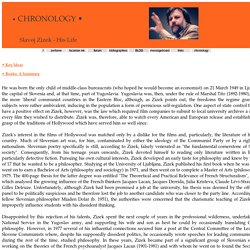 SLAVOJ ZIZEK, God Without the Sacred: The Book of Job, The First Critique of Ideology. Kyle Minor The latest installment in the New York Public Library’s Three Faiths Exhibition (some of which is available online here) is a 106 minute lecture by Slavoj Zizek which is among the most plainspoken and accessible Slavoj Zizek lectures I’ve ever heard (click here for the lecture). 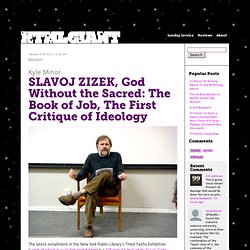 The St. Clement’s Episcopal Church in New York maintains (or at least used to maintain) the custom of inviting a stranger, often a non-Christian one, to deliver a sermon once each year. (The most famous of these sermons became the centerpiece of Kurt Vonnegut’s Palm Sunday.) It’s a tremendously broadminded idea — if we (whichever idea of “we” with which we’ve identified) are only listening to ourselves and not allowing any outside voices to speak unfiltered from our seat of authority, maybe we’ll miss the opportunity for a course correction as a community. Slavoj Žižek: Pervert's Guide to Europe. Slavoj Zizek: Philosophy - Key Ideas. 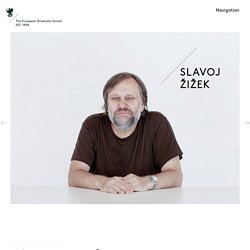 He is a professor of philosophy at The European Graduate School / EGS, a senior researcher at the Institute for Sociology and Philosophy at the University of Ljubljana, Global Distinguished Professor of German at New York University, International Director of the Birkbeck Institute for the Humanities, and founder and president of the Society for Theoretical Psychoanalysis, Ljubljana. Aside from these appointments, Žižek tirelessly gives lectures around the globe and is often described as “the Elvis of cultural theory”.

Although, more seriously, as British critical theorist Terry Eagleton confers, Žižek is the “most formidably brilliant” theorist to have emerged from Europe in decades. International Journal of Žižek Studies. Join the IJŽS Facebook group for access to updates, announcements, and discussions. 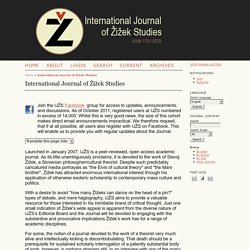 As of October 2011, registered users at IJŽS numbered in excess of 14,000. Whilst this is very good news, the size of this cohort makes direct email announcements impractical. We therefore request, that if at all possible, all users also register with IJŽS on Facebook. This will enable us to provide you with regular updates about the Journal. Launched in January 2007, IJŽS is a peer-reviewed, open access academic journal. Zizek and Narcissism 1. Madness isn't the Only Option: On Zizek’s Resignation to Narcissistic Politics by William Earnest [This paper is relatively long, 25 pages, and some readers may find it more convenient to download the .pdf file. 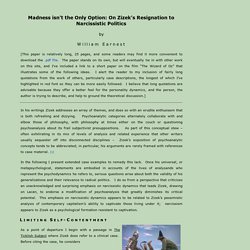 The paper stands on its own, but will eventually tie in with other work on this site, and I’ve included a link to a short paper on the film “The Wizard of Oz” that illustrates some of the following ideas. I alert the reader to my inclusion of fairly long quotations from the work of others, particularly case descriptions, the longest of which I’ve highlighted in red font so they can be more easily followed. Publisher description for Zizek's 'On Belief' Slavoj Zizek. The Violent Visions of Slavoj Žižek by John Gray. Less Than Nothing: Hegel and the Shadow of Dialectical Materialism by Slavoj Žižek Verso, 1,038 pp., $69.95 Living in the End Times Verso, 504 pp., $22.95 (paper) Few thinkers illustrate the contradictions of contemporary capitalism better than the Slovenian philosopher and cultural theorist Slavoj Žižek. 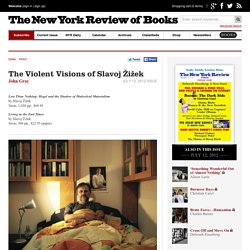 Born and educated in Ljubljana, the capital of the People’s Republic of Slovenia in the former Yugoslav federation until the federal state began to break up and Slovenia declared independence in 1990, Žižek has held academic positions in Britain, America, and Western Europe as well as in Slovenia. Žižek’s wide influence does not mean that his philosophical and political standpoint can be easily defined. Žižek’s work sets itself in opposition to Marx on many issues. Slavoj Žižek a lacanian plea for fundamentalism. Slavoj Žižek. The Function of Fantasy In The Lacanian Real. 2012. Žižek - The Limits of Hegel. Slavoj Žižek: Democracy and Capitalism Are Destined to Split Up. Transcript Slavoj Zizek: Well people often ask me how can you be so stupid and still proclaim yourself a communist. 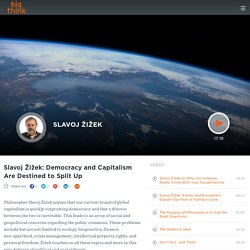 What do you mean by this? Well, I have always to emphasize that first I am well aware that let’s call it like this – the twentieth century’s over. Which means all not only communists solution but all the big leftist projects of the twentieth century failed. Not only did Stalinist communism although there its failure is much more paradoxical. I think this is a nice idea as far as it goes but it’s not the solution. What we are more and more getting today is a capitalism which is brutally efficient but it no longer needs democracy for its functioning.

And another example that I use again and again – Starbucks coffee and others. But you cannot control in this way real ecological catastrophes. So again how to solve this problem? A, all these problems are problems of commons. Because there is one problem and I can tell you I was in China and Russia.