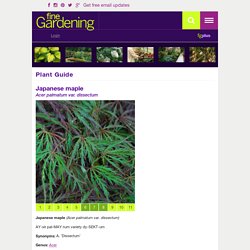 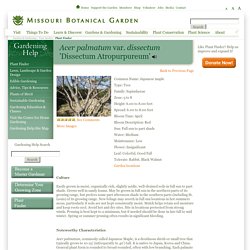 Grows well in sandy loams. May be grown in full sun in the northern parts of its growing range, but prefers some part afternoon shade in the southern parts (including St. Growing acer palmatum in pots. Great Plant Picks. Japanese Maple - Seiryu - Japanese Maple Tree. 'Seiryu' is a very unique Japanese maple that is unlike any in the world. 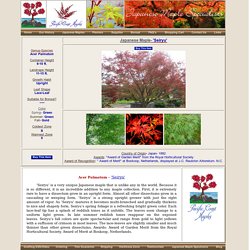 Because it is so different, it is an incredible addition to any maple collection. First, it is extremely rare to have a dissectum grow in an upright form. Almost all other dissectums grow in a cascading or weeping form. EBT Tree Shrub list. EBT Tree Shrub list. Acer palmatum var. dissectum ‘Garnet’ Acer • Maple • カエデ • 楓 • kaede Our Garden has only one, growing in the area W, by the exit from tea house garden. 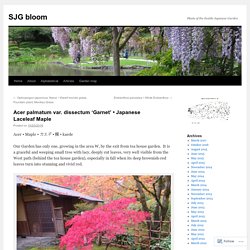 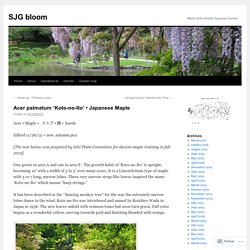 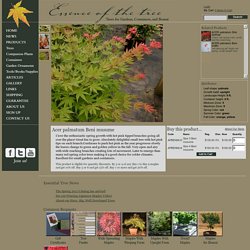 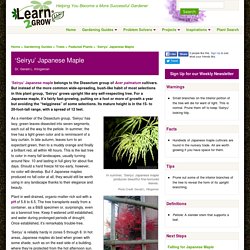 But instead of the more common wide-spreading, bush-like habit of most selections in this plant group, ‘Seiryu’ grows upright like any self-respecting tree. For a Japanese maple, it’s fairly fast-growing, putting on a foot or more of growth a year but avoiding the “twigginess” of some selections. Acer palmatum ‘Seiryu’ - Seiryu Japanese Maple - All Plants - Broken Arrow Nursery. 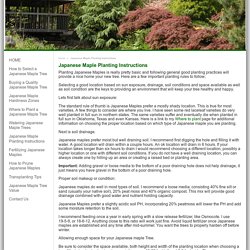 Here are a few important planting rules to follow; Selecting a good location based on sun exposure, drainage, soil conditions and space available as well as soil condition are the keys to providing an environment that will keep your tree healthy and happy. Lets first talk about sun exposure: The standard rule of thumb is Japanese Maples prefer a mostly shady location. Acer davidii - David Maple - All Plants - Broken Arrow Nursery. Acer Palmatum 'Amagi Shigure' is my Favorte Plant...This Week. I didn't always like Acer palmatum. 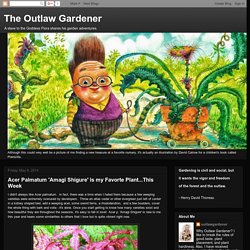 In fact, there was a time when I hated them because a few weeping varieties were extremely overused by developers. Throw an atlas cedar or other evergreen just left of center in a kidney shaped bed, add a weeping acer, some sword ferns, a rhododendron, and a few boulders, cover the whole thing with bark and voila - it's done. Once you start getting to know how many varieties exist and how beautiful they are throughout the seasons, it's easy to fall in love! Acer p. 'Amagi Shigure' is new to me this year and bears some similarities to others that I love but is quite vibrant right now. Coral Bark Maple - A tree for all seasons. Acer palmatum Red Pygmy. Acer palmatum Seiryu. Acer Corallinum and Corylus Red Majestic. Planting, Pruning, Care for Japanese Maples. Japanese Maple - Senkaki (Sango Kaku) Japanese Maple - Suminagashi. Hort Shorts: Japanese Maples - Tilt's Baker's Dozen<sup>1</sup>

Hello Everyone, I love our Alabama native plants and will stand in the middle of some Virginia sweetspires, Oakleaf hydrangeas or Summersweets and shout about the virtues and benefits of using our native plants to keep Alabama, Alabama. 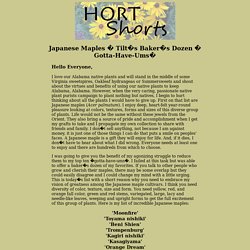 However, when the very caring, passionate native plant purists campaign to plant nothing but natives, I begin to hurt thinking about all the plants I would have to give up. First on that list are Japanese maples (Acer palmatum). I enjoy deep, heart-felt year-round pleasure looking at colors, textures, forms and sizes of this diverse group of plants. Life would not be the same without these jewels from the Orient. They also bring a source of pride and accomplishment when I get my grafts to take and I propagate my own collection to share with friends and family. Moonrise Japanese Maple. Crimson Queen Japanese Maple. Fireglow Japanese Maple. Growing Japanese Maple Trees in Containers.

Essence of the tree. Choosing the Best Maple for Your Location Information to help you choose the perfect tree for colder climates, hot dry climates, hot humid climates and wet climates. Growing Japanese Maples in Hard Water Areas There are a few amendments to soil and water to be successful growing in hard water areas. Shantung Maples. Growing the Shantung Maple in Texas Conditions written by Keith Johansson for The Maple Society newsletter, published Summer, 2006.