A day in the life of baby coral. Werner Herzog’s Cave of Forgotten Dreams, a film investigation into ancient paintings – Offscreen. La Grotte Chauvet-Pont d'Arc - Ardèche, France. Anthropologist, prehistorian Julien Monney holds a PhD in prehistoric anthropology, researching the ethnoarchaeology of cave art, Julien has been the director of dating the decorated caves in the gorge of Ardèche since 2008, more specifically the cave of Deux-Ouvertures, the cave at Points d'Aiguèze and at Tête-du-Lion. 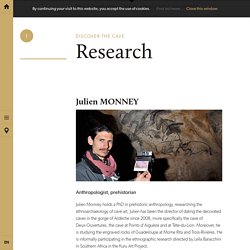 Moreover, he is studying the engraved rocks of Guadeloupe at Morne Rita and Trois-Rivières. He is informally participating in the ethnographic research directed by Leïla Baracchini in Southern Africa in the Kuru Art Project. Seshat, Ancient Egyptian Goddess of Writing and Measurement. ByCaroline SeawrightJuly 30, 2001 Updated: November 29, 2012 14 Comments Seshat (Sashet, Sesheta, Sesat), meaning 'female scribe', was seen as the goddess of writing, historical records, accounting and mathematics, measurement and architecture to the ancient Egyptians. 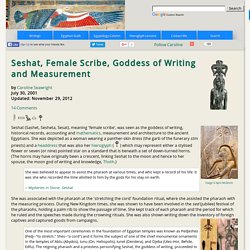 She was depicted as a woman wearing a panther-skin dress (the garb of the funerary stm priests) and a headdress that was also her hieroglyph ( ) which may represent either a stylised flower or seven (or nine) pointed star on a standard that is beneath a set of down-turned horns. (The horns may have originally been a crescent, linking Seshat to the moon and hence to her spouse, the moon god of writing and knowledge, Thoth.) She was believed to appear to assist the pharaoh at various times, and who kept a record of his life: It was she who recorded the time allotted to him by the gods for his stay on earth. -- Mysteries in Stone, Seshat -- Cyril Fagan (1951), Zodiacs Old and New: A Probe Into Antiquity and What Was Found, p. 15.

Seshat. Google Custom Search. The conscious field through the Akashic Records – Patricia Hardman. After 400 years of idealizing reason and logic as the best operating system of civilization, it is becoming increasingly clear that this is no longer working for us, and that the human experience is reaching a critical turning point. 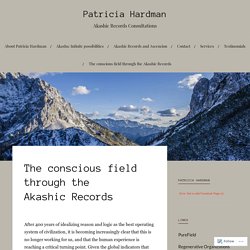 Given the global indicators that point to widespread ecological distress, economic disparity, and social dysfunction, there is abundant evidence to show that our minds by themselves are not capable of creating prosperous, sustainable communities for all, or of securing the health of all species for all time. The hard fact is that we appear to have lost the capacity to take care of ourselves and our environment within the dictates of natural and universal law. The logical conclusion – ironically – is that if there is a human intelligence that can create the solutions we need, this must be located somewhere other than the brain. As Einstein is often cited as saying, we cannot solve current problems with the minds that created them. The Physics of Consciousness: The Zero-Point Field, Pineal Gland and Out-of-Body Experience / Evolving Beings. For centuries it has been recorded that under certain circumstances human consciousness can leave the body and travel both within the external world and to other locations of existence. 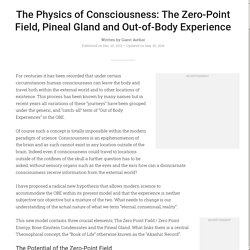 This process has been known by many names but in recent years all variations of these “journeys” have been grouped under the generic, and “catch-all” term of “Out of Body Experiences” or the OBE. Unified Field and Quantum Field. Quantum physics has brought forth a great deal of scientific knowledge and conceptual insight into the nature of reality at the quantum atomic level. 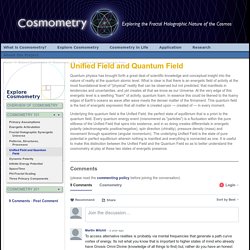 What is clear is that there is an energetic field of activity at the most foundational level of "physical" reality that can be observed but not predicted, that manifests in tendencies and uncertainties, and yet creates all that we know as our Universe. At the very edge of this energetic level is a seething "foam" of activity, quantum foam. In essence this could be likened to the foamy edges of Earth's oceans as wave after wave meets the denser matter of the firmament. This quantum field is the bed of energetic expression that all matter is created upon — created of — in every moment. Akashic Field and Consciousness.

Photo credit:NASA’s Goddard Space Flight Center According to Ervin Laszlo, the coherence of the atom and the galaxies is the same coherence that keeps living cells together, cooperating to form life. 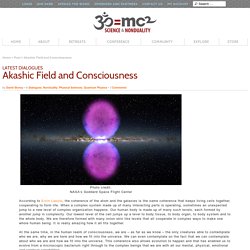 When a complex system made up of many interacting parts is operating, sometimes an unexpected jump to a new level of complex organization happens. Our human body is made up of many such levels, each formed by another jump in complexity. Our lowest level of the cell jumps up a level to body tissue, to body organ, to body system and to the whole body. We are therefore formed with many onion skin like levels that all cooperate in complex ways to make one whole human being. Why String Theory. Begin, be bold and venture to be wise. 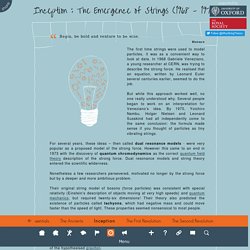 Horace The first time strings were used to model particles, it was as a convenient way to look at data. In 1968 Gabriele Veneziano, a young researcher at CERN, was trying to describe the strong force. He realised that an equation, written by Leonard Euler several centuries earlier, seemed to do the job. But while this approach worked well, no one really understood why. Seshat the egyptian goddess facts. Seshat, Ancient Egyptian Goddess of Writing and Measurement. ByCaroline SeawrightJuly 30, 2001 Updated: November 29, 2012 14 Comments. 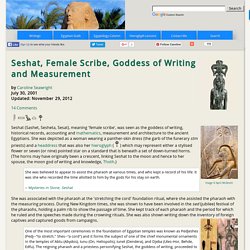 Egyptian Gods: Seshat. Seshat is the ancient Egyptian deity for wisdom, knowledge and writing whose following date back as early as the Second Dynasty. 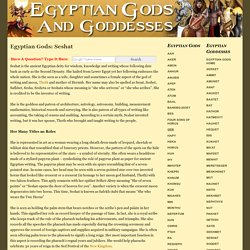 She hailed from Lower Egypt yet her following embraces the whole nation. She is the seen as a wife, daughter and sometimes a female aspect of the god of writing and moon, Thoth and mother of Hornub. Her name may also be spelled as Sesat, Seshet, Safkhet, Sesha, Sesheta or Seshata whose meaning is “she who scrivens” or “she who scribes”. She is credited to be the inventor of writing. She is the goddess and patron of architecture, astrology, astronomy, building, measurement mathematics, historical records and surveying. Her Many Titles an Roles. Scientists Discover 180 Species of Glowing Fish. A few lucky animals, such as jellyfish and corals, have the strange ability to absorb light and emit it as a different, glowing color. 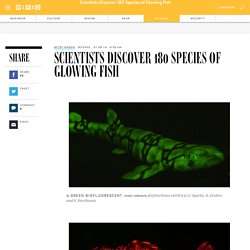 This phenomenon is known as biofluorescence, and now scientists have discovered it is much, much more widespread than we knew. Lots of species that seem perfectly normal to us under regular light look entirely different in deeper water. Coral. A coral "group" is a colony of myriad genetically identical polyps. Each polyp is a sac-like animal typically only a few millimeters in diameter and a few centimeters in length. A set of tentacles surround a central mouth opening. An exoskeleton is excreted near the base.

Are corals animals or plants? Corals are sessile, which means that they permanently attach themselves to the ocean floor, essentially "taking root" like most plants do. We certainly cannot recognize them by their faces or other distinct body parts, as we can most other animals. So what exactly are corals? Why String Theory. Every revolutionary idea seems to evoke three stages of reaction. (1) It’s completely impossible. (2) It’s possible, but it’s not worth doing. (3) I said it was a good idea all along. Arthur C. Clarke As is so often the case, string theory arose from a collection of discredited ideas. Over a period of 50 years vital pieces of the puzzle came to light, only to be ignored in favour of more fashionable topics. When string theory became mainstream, physicists realised that these early insights were extraordinarily prescient.

What does an Archivist do? Smithsonian Institution Archives. Zoom. Female Jewel Names, Gem Names, page 1 of 2. Female Jewel Names, Gem Names Jewelry names. The Pineal gland - DMT - melanin & myth - Naomi Astral. Pineal Gland the God Organ. Why pineal gland and mental health are most important in these times. Clean pineal gland and strong mental health are most important to tell the truth from the lies and take control of your life back to your own hands. While we spend our days being manipulated slaves, science and spirituality are joining up and offering us clues.

Today we can say that many of the secrets are right out in the open and that truth and knowledge can come to those that seek them and are able to recognize them. Pineal Gland - Our Third Eye: The Biggest Cover-Up in Human History. Fillmore Fulfilled: Pineal Gland. « Back to Fillmore Fulfilled. Pineal Gland ⋆ SHIFT> What Is the Pineal Gland? Seven Prophecies Yet to Come. Edgar Cayce Readings. Seshat. Rock 'n Roll Shaman: Sheshat, the Immaculate Holder of the Akashic Records.