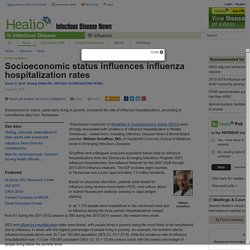 “Area-based measures of disparities in [socioeconomic status (SES)] were strongly associated with incidence of influenza hospitalization in Middle Tennessee,” researchers, including Infectious Disease News Editorial Board member William Schaffner, MD, of Vanderbilt University School of Medicine, wrote in Emerging Infectious Diseases. William Schaffner Schaffner and colleagues analyzed population-based data on influenza hospitalizations from the Tennessee Emerging Infections Program (EIP) Influenza Hospitalization Surveillance Network for the 2007-2008 through 2013-2014 influenza seasons. The EIP includes eight counties in Tennessee and covers approximately 1.5 million residents. In all, 1,743 people were hospitalized in the catchment area due to influenza during the study period. Eurosurveillance. Eurosurveillance - View Article. Avian influenza A(H7N9) virus re-emerged in China in December 2013, after a decrease in the number of new cases during the preceding six months. 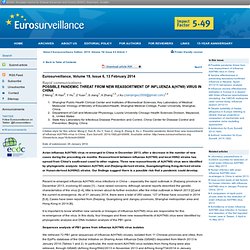 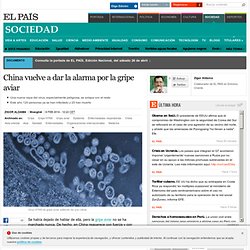 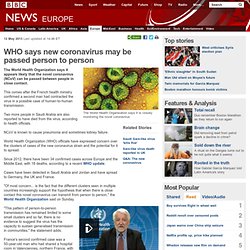 This comes after the French health ministry confirmed a second man had contracted the virus in a possible case of human-to-human transmission. Two more people in Saudi Arabia are also reported to have died from the virus, according to health officials. NCoV is known to cause pneumonia and sometimes kidney failure. World Health Organization (WHO) officials have expressed concern over the clusters of cases of the new coronavirus strain and the potential for it to spread. Since 2012, there have been 34 confirmed cases across Europe and the Middle East, with 18 deaths, according to a recent WHO update.

Cases have been detected in Saudi Arabia and Jordan and have spread to Germany, the UK and France. Continue reading the main story. Transcript of media briefing by Dr Michael O'Leary, WHO Representative in China. DR MICHAEL O’LEARY: Good afternoon, and thank you for coming. 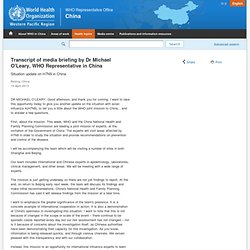 I want to take this opportunity today to give you another update on the situation with avian influenza A(H7N9), to tell you a little about the WHO joint mission to China, , and to answer a few questions. First, about the mission. This week, WHO and the China National Health and Family Planning Commission are leading a joint mission of experts, at the invitation of the Government of China.

The experts will visit areas affected by H7N9 in order to study the situation and provide recommendations on prevention and control of the disease. I will be accompanying the team which will be visiting a number of sites in both Shanghai and Beijing. Our team includes international and Chinese experts in epidemiology, laboratories, clinical management, and other areas. 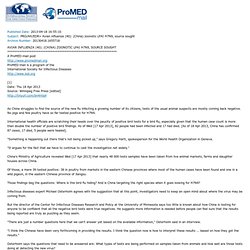 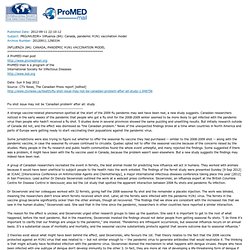 Some jurisdictions were also trying to figure out whether to offer the seasonal flu vaccine they had purchased -- similar to the 2008-2009 shot -- along with the pandemic vaccine, in case the seasonal flu viruses continued to circulate.