MOLAISE-01. Having trawled the web for information on St. 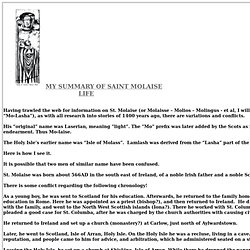 Molaise (or Molaisse – Molios – Molingus - et al, I will use Molaise. (Pronounced “Mo-Lasha”), as with all research into stories of 1400 years ago, there are variations and conflicts. His “original” name was Laserian, meaning “light”. The “Mo” prefix was later added by the Scots as it was a term of respect & endearment. Thus Mo-laise. The Holy Isle’s earlier name was “Isle of Molass”.

Here is how I see it. It is possible that two men of similar name have been confused. St. There is some conflict regarding the following chronology! As a young boy, he was sent to Scotland for his education. He returned to Ireland and set up a church (monastery?) Later, he went to Scotland, Isle of Arran, Holy Isle. Leaving the Holy Isle, he set up a church at Shiskine, Isle of Arran.

There is doubt of his canonisation by Rome, but that he got the “sainthood” by reputation. In his latter years he returned to Ireland, and died there about 639 AD. St. St. Eirenaeus Philalethes. Eirenaeus Philalethes (the peaceful lover of truth) was a 17th-century alchemist and the author of many influential works. 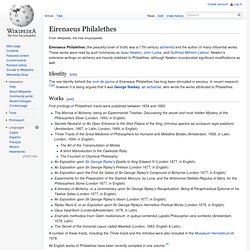 These works were read by such luminaries as Isaac Newton, John Locke, and Gottfried Wilhelm Leibniz. Newton's extensive writings on alchemy are heavily indebted to Philalethes, although Newton incorporated significant modifications as well. Identity[edit] Works[edit] First printings of Philalethes' tracts were published between 1654 and 1683: A number of these tracts, including the Three tracts and the Introitus were also included in the Musaeum Hermeticum of 1678. All English works of Philalethes have been recently compiled in one volume.[3] Available online: References[edit] Jump up ^ Gehennical Fire: The Lives of George Starkey, an American Alchemist in the Scientific Revolution by William R Newman, University of Chicago Press, 2003 (ISBN 0226577147)Jump up ^ Alchemy Tried in the Fire: Starkey, Boyle, and the Fate of Helmontian Chymistry by William R. 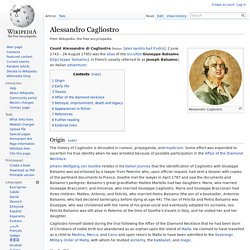 Origin[edit] La Très Sainte Trinosophie. "A man who knows everything and who never dies" [Voltaire] The 'Cosmic Master of the Age of Aquarius' and mysterious adept, the Count de Saint-Germain, allegedly died in 1784.

The Most Holy Three-fold Wisdom – mrsonord

He was a spy, virtuoso violinist, diplomat, friend at the Court of Louis XV, adventurer and was said to be able to transform iron into gold. 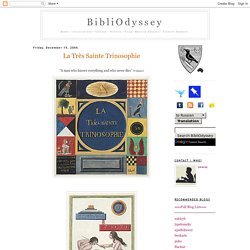 A veritable procession of people have claimed to be the still living Count de Saint-Germain since 1784. Affair of the Diamond Necklace. The diamond necklace was commissioned by Louis XV for his mistress, Madame du Barry. 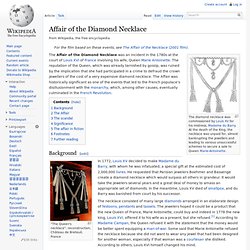 At the death of the King, the necklace was unpaid for, almost bankrupting the jewellers and leading to various unsuccessful schemes to secure a sale to Queen Marie-Antoinette. Cagliostro Timeline. Interactive timeline of the life and travels of Count Cagliostro, the Great Magician and Sage. 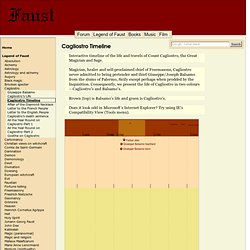 Magician, healer and self-proclaimed chief of Freemasons, Cagliostro never admitted to being pretender and thief Giuseppe/Joseph Balsamo from the slums of Palermo, Sicily except perhaps when prodded by the Inquisition. Consequently, we present the life of Cagliostro in two colours – Cagliostro’s and Balsamo’s. Brown (top) is Balsamo’s life and green is Cagliostro’s. Does it look odd in Microsoft’s Internet Explorer? Try using IE’s Compatibility View (Tools menu). Theosophy Trust. Mystery surrounds men who live their lives in the service of humanity and hold themselves ultimately accountable only to their superiors. 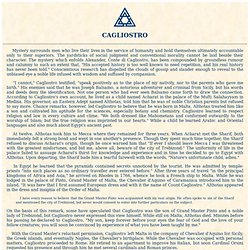 The yardsticks of social judgment and conventional morality cannot be laid beside their character. The mystery which enfolds Alexander, Conte di Cagliostro, has been compounded by groundless rumour and calumny to such an extent that, "His accepted history is too well known to need repetition, and his real history has never been told.

" Conscientious research has dispelled the clouds of gossip and slander enough to reveal to the unbiased eye a noble life infused with wisdom and suffused by compassion. "I cannot," Cagliostro testified, "speak positively as to the place of my nativity, nor to the parents who gave me birth. " His enemies said that he was Joseph Balsamo, a notorious adventurer and criminal from Sicily, but his words and deeds deny the identification. At twelve, Althotas took him to Mecca where they remained for three years. Hiram Abiff. Hiram Abiff (also Hiram Abif or the Widow's son) is the central character of an allegory presented to all candidates during the third degree in Freemasonry. 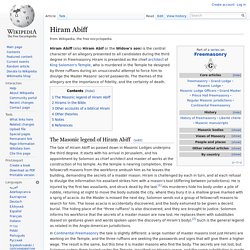 Hiram is presented as the chief architect of King Solomon's Temple, who is murdered in the Temple he designed by three ruffians during an unsuccessful attempt to force him to divulge the Master Masons' secret passwords.