The MVC Pattern and PHP, Part 2. Welcome to part 2 of this two-part series discussing MVC and PHP, where we’ll discuss some of the considerations one must make when using an MVC architecture. 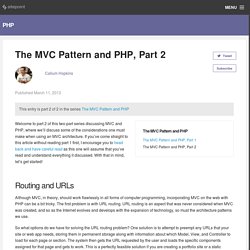 If you’ve come straight to this article without reading part 1 first, I encourage you to head back and have careful read as this one will assume that you’ve read and understand everything it discussed. With that in mind, let’s get started! Routing and URLs Although MVC, in theory, should work flawlessly in all forms of computer programming, incorporating MVC on the web with PHP can be a bit tricky. The first problem is with URL routing. So what options do we have for solving the URL routing problem? Our URLs would look like this: example.com/index.php? Or example.com/index.php? The example MVC system loads the specific Model, View, and Controller set for the requested page. The is a basic example of static routing which, even through it’s very simple to set up, comes with some drawbacks. Our new URL would now look like: Templates.

The MVC Pattern and PHP, Part 1. The Model-View-Control (MVC) pattern, originally formulated in the late 1970s, is a software architecture pattern built on the basis of keeping the presentation of data separate from the methods that interact with the data. 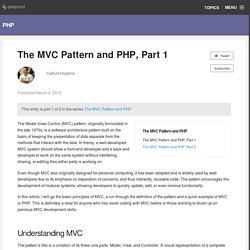 In theory, a well-developed MVC system should allow a front-end developer and a back-end developer to work on the same system without interfering, sharing, or editing files either party is working on. Even though MVC was originally designed for personal computing, it has been adapted and is widely used by web developers due to its emphasis on separation of concerns, and thus indirectly, reusable code. The pattern encourages the development of modular systems, allowing developers to quickly update, add, or even remove functionality.

The Dependency Inversion Principle. While some central concepts in the realm of object-oriented design are generally harder to digest at first, such as separation of concerns and implementation switching, more intuitive and untangled paradigms on the other hand are simpler, like programming to interfaces. 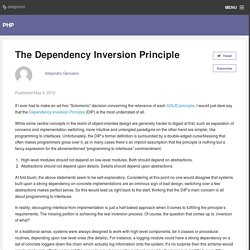 Unfortunately, the DIP’s formal definition is surrounded by a double-edged curse/blessing that often makes programmers gloss over it, as in many cases there’s an implicit assumption that the principle is nothing but a fancy expression for the aforementioned “programming to interfaces” commandment: High-level modules should not depend on low-level modules. Both should depend on abstractions.Abstractions should not depend upon details.

Details should depend upon abstractions. At first blush, the above statements seem to be self-explanatory. In reality, decoupling interface from implementation is just a half-baked approach when it comes to fulfilling the principle’s requirements. Closing Remarks Image via kentoh/ Shutterstock. Alejandro Gervasio, Author at SitePoint. SOLID (object-oriented design) In computer programming, SOLID (Single responsibility, Open-closed, Liskov substitution, Interface segregation and Dependency inversion) is a mnemonic acronym introduced by Michael Feathers for the "first five principles" named by Robert C. 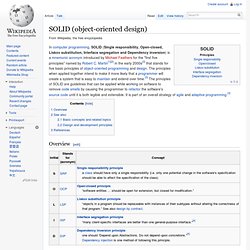 Martin[1][2] in the early 2000s[3] that stands for five basic principles of object-oriented programming and design. The principles when applied together intend to make it more likely that a programmer will create a system that is easy to maintain and extend over time.[3] The principles of SOLID are guidelines that can be applied while working on software to remove code smells by causing the programmer to refactor the software's source code until it is both legible and extensible. It is part of an overall strategy of agile and adaptive programming.[3] Design Patterns. It has been highly influential to the field of software engineering and is regarded as an important source for object-oriented design theory and practice. 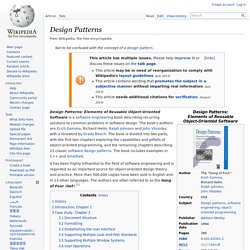 More than 500,000 copies have been sold in English and in 13 other languages. The authors are often referred to as the Gang of Four (GoF).[1] History[edit] Introduction, Chapter 1[edit] Chapter 1 is a discussion of object-oriented design techniques, based on the authors' experience, which they believe would lead to good object-oriented software design, including: clients remain unaware of the specific types of objects they use, as long as the object adheres to the interfaceclients remain unaware of the classes that implement these objects; clients only know about the abstract class(es) defining the interface Use of an interface also leads to dynamic binding and polymorphism, which are central features of object-oriented programming. The authors admit that delegation and parameterization are very powerful but add a warning: Formatting[edit]