GlusterFS & Ceph seem to have the most traction .. Weed-fs is also gaining traction, but would it be supported by ovirt, proxmox, eucaqlyptus, etc ?

Glusterfs, NFS, MooseFS - atp. Its long been our plan to move to a better network filesystem than NFS - ideally a distributed one so that we can get rid of our current NFS+DRBD+Pacemaker storage servers, and move to something a bit more integrated and active/active. 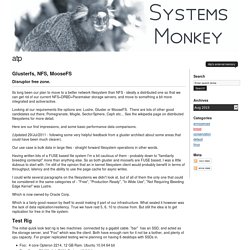 Looking at our requirements the options are; Lustre, Gluster or MooseFS. There are lots of other good candidates out there; Pomegranate, Mogile, Sector/Sphere, Ceph etc... See the wikipedia page on distributed filesystems for more detail. Here are our first impressions, and some basic performance data comparisons. (Updated 29/Jul/2011 - following some very helpful feedback from a gluster architect about some areas that could have been much clearer).

Our use case is bulk data in large files - straight forward filesystem operations in other words. Having written bits of a FUSE based file system I'm a bit cautious of them - probably down to "familiarily breeding contempt" more than anything else. Which is now owned by Oracle Corp. Test Rig Glusterfs MooseFS Test 1. Glusterfs, NFS, MooseFS - atp. A_survey_of_dfs. Mr. Blue Coat: Distributed File System benchmark. I'm investigating various distributed file systems (loosely termed here to include SAN-like solutions) for use in Docker, Drupal, etc. and couldn't find recent benchmark stats for some popular solutions so I figured I'd put one together. 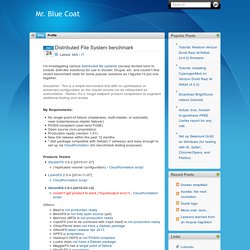 Disclaimer: This is a simple benchmark test with no optimization or advanced configuration so the results should not be interpreted as authoritative. Rather, it's a 'rough ballpark' product comparison to augment additional testing and review. My Requirements: Two master servers were used for each test of 2, 10, and 18 clients. Results of the three tests were averaged. Example Run: Glusterfs, NFS, MooseFS - atp. Clustered file system. Shared-disk / storage area network[edit] The underlying storage area network may use any of a number of block-level protocols, including SCSI, iSCSI, HyperSCSI, ATA over Ethernet (AoE), Fibre Channel, network block device, and InfiniBand. 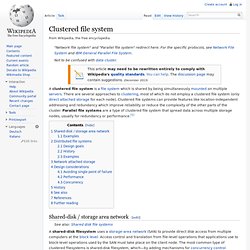 There are different architectural approaches to a shared-disk filesystem. Some distribute file information across all the servers in a cluster (fully distributed). Others utilize a centralized metadata server. Both achieve the same result of enabling all servers to access all the data on a shared storage device. Examples[edit] 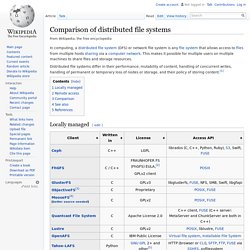 This makes it possible for multiple users on multiple machines to share files and storage resources. Distributed file systems differ in their performance, mutability of content, handling of concurrent writes, handling of permanent or temporary loss of nodes or storage, and their policy of storing content.[1] Locally managed[edit] Remote access[edit] Comparison[edit] ReiserFS vs ext4 vs XFS vs ZFS vs Btrfs - Linux filesystems compared - ServerFocus. If you’re a Linux user, you’ve likely been asked at some point if you want Ext3, Ext4, XFS, ReiserFS, Btrfs, or one of many other filesystem acronyms. 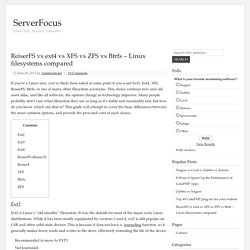 This choice confuses new and old users alike, and like all software, the options change as technology improves. Many people probably don’t care what filesystem they use as long as it’s stable and reasonably fast, but how do you know which one that is? This guide will attempt to cover the basic differences between the most common options, and provide the pros and cons of each choice. Ext2 Ext2 is Linux’s “old standby” filesystem. Recommended to move to EXT3Not JournaledPOSIX access control Recommended Use: USB/Solid State Drives, or any cause where you need high stability with minimal reads/writes. Ext3 The most notable difference between ext2 and ext3 was the introduction of journaling. Most popular Linux file system, limited scalability in size and number of filesJournaledPOSIX extended access control Ext4 ReiserFS (Reiser3) Reiser4 Btrfs. 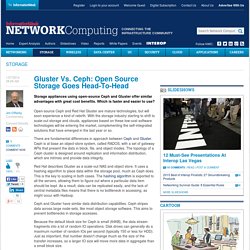 Which is faster and easier to use? Open-source Ceph and Red Hat Gluster are mature technologies, but will soon experience a kind of rebirth. With the storage industry starting to shift to scale-out storage and clouds, appliances based on these low-cost software technologies will be entering the market, complementing the self-integrated solutions that have emerged in the last year or so. There are fundamental differences in approach between Ceph and Gluster. A_survey_of_dfs. Filesystems - Distributed File Systems: GridFS vs. GlusterFS vs Ceph vs HekaFS Benchmarks. [Linux.conf.au 2013] - grand distributed storage debate glusterfs and ceph going head head.