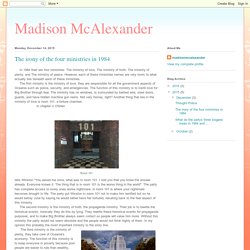 However, each of these ministries names are very ironic to what actually lies beneath each of these ministries. The first ministry is the ministry of love, they are responsible for all the government aspects of Oceania such as police, security, and emergencies. The function of this ministry is to instill love for Big Brother through fear. The ministry has no windows, is surrounded by barbed wire, steel doors, guards, and have hidden machine gun nests. Not very homey, right? Why Orwell’s 1984 could be about now - BBC Culture. George Orwell's 1984 explains Trump Doublespeak, alternative facts and reality control. Donald Trump: Now is the dawn of a new era Sign up for FREE now and never miss the top Royal stories again. 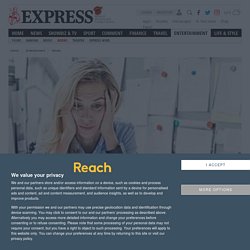 Invalid email We will use your email address only for sending you newsletters. Please see our Privacy Notice for details of your data protection rights. Challenges and Bans of 'The Handmaid's Tale' Aren't Really Just About Sex or Profanity. In one of the many powerful scenes in Margaret Atwood's The Handmaid's Tale, the narrator lies in bed one night and recalls a time she was at a park with her mother and people were burning books. 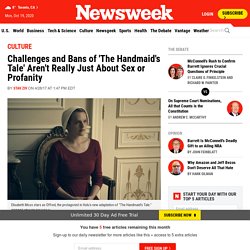 Then she realized the books were magazines, some with pictures of naked women on them. A woman asked the girl if she'd like to throw one onto the fire. "Good riddance to bad rubbish," she said, handing over a magazine. The future isn't female enough: the problematic feminism of The Handmaid's Tale. Which fictional dystopia would be the worst to live in? In the Guide’s weekly Solved! 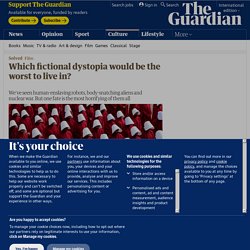 Column, we look into a pressing pop-culture question you’ve been burning to know the answer to – and settle it, once and for all Before we work out which dystopia is worst, it might be useful to define what exactly a dystopia is. According to the dictionary, a dystopia is “a society in which there is great suffering, typically one that is totalitarian or post-apocalyptic”. Some may say that we are already in a dystopia, but compared to apes revolting or aliens blowing us to smithereens, 2020 has not been that bad. 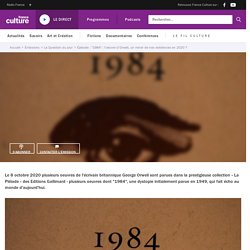 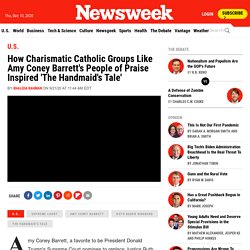 Barrett, a devout Catholic, and her husband both belong to the People of Praise group, current and former members have said, according to The New York Times. Their fathers have served as leaders in the group. The charismatic Christian parachurch organization, which was founded in South Bend, Indiana in 1971, teaches that men have authority over their wives.

Members swear a lifelong oath of loyalty to one another and are expected to donate at least 5 per cent of their earnings to the group. ‘The Handmaid’s Tale’: A Newly Resonant Dystopia Comes to TV. The journalist Omar El Akkad has just released his first novel, a dystopia called “American War,” and in an email, he wrote, “I suspect the appetite for dystopian fiction reaches its peak not when things are at their worst, but when it looks like they’re headed there.” 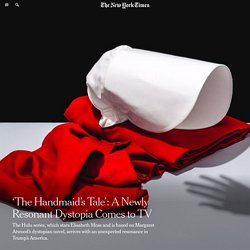 Television is a mass market, so perhaps it’s not surprising that widespread social disquiet would play out in that medium. Viewers can choose from post-apocalyptic dystopias (“The 100”) or corporate ones (“Mr. Robot”), technological (“Black Mirror”), or ones where survivors fend off zombies (“The Walking Dead”). But the graveyard of canceled TV dystopias is also crowded — “The Aftermath,” “Incorporated” — as if, perhaps, there’s a limit to an audience’s appetite for misery.

“I’m not going to lie, we’ve retained that darkness,” Ms. Gilead is not technically a futuristic society, but a backward (or sideways) glance. “The theory being that if human beings have done it once they can do it again,” said Ms. Margaret Atwood on What ‘The Handmaid’s Tale’ Means in the Age of Trump. Which brings me to three questions I am often asked. 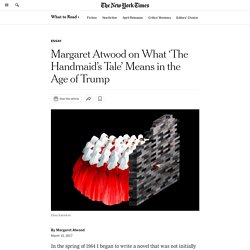 First, is “The Handmaid’s Tale” a “feminist” novel? If you mean an ideological tract in which all women are angels and/or so victimized they are incapable of moral choice, no. If you mean a novel in which women are human beings — with all the variety of character and behavior that implies — and are also interesting and important, and what happens to them is crucial to the theme, structure and plot of the book, then yes. In that sense, many books are “feminist.”

Why interesting and important? Why The Handmaid’s Tale is so relevant today - BBC Culture. The future isn't female enough: the problematic feminism of The Handmaid's Tale. Since its first season, The Handmaid’s Tale has been upheld by many women as a rallying cry for the feminist resistance. 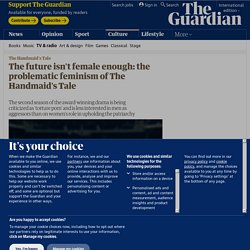 The image of red robed and white bonneted women from the classic feminist text has become as celebrated as Rosie the Riveter. It has been referenced in any number of striking signs held up by members of the Women’s March, and has even been donned by groups of women protesting regressive and dangerous policies that threaten female autonomy and reproductive freedoms. There is a pressing feeling among many feminists that watching The Handmaid’s Tale is important, despite the fact that, like many shows on television, each hour-long episode catapults the viewer into a world where violence against women is constant. In shows like True Detective and Game of Thrones, the focus on female debasement is often criticized precisely because female suffering is positioned as entertainment. Margaret Atwood on the real-life events that inspired The Handmaid’s Tale and The Testaments. A progressive conservative MP has suggested that Canadians start with renewed vigour over the holidays to increase the country’s population. 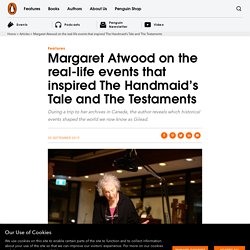 Dave Nickerson, Western Arctic, based his proposal in the House of Commons on Statistic Canada figures that show Canada’s fertility rate dropping to an all-time low. ‘It ought to be public policy to encourage families to have more children,’ said Nickerson, ‘in that the process involved is not unduly distasteful.

Might I suggest that we could all start with renewed vigour this Christmas.’” Which leads nicely into this one, I think: ‘Artificial birth methods are attacked by some feminists fearing male control. There is concern that we are moving toward methods that are not always in the best interests of individual women,’ says a sociologist. ‘The smart card: how to make a plastic payment,’ ‘Electronic debit cards met with resistance,’ ‘Germans computerize identity cards.’ Q: Yes, what is it with you and debit cards?

MA: I know. ‘The Handmaid’s Tale’ doesn’t feel like fiction anymore. It’s not particularly fair to “The Handmaid’s Tale” that its third season comes in the middle of a national debate over the sanctity of life and, more specifically, what constitutes life. Hulu didn’t plan for the release to time perfectly around a series of anti-abortion bills popping up around state houses around the country. Nor did showrunner Bruce Miller — or even author Margaret Atwood, for that matter. But here we are. The third season of the dystopian drama, which is now streaming, picks up immediately after last season’s finale, which saw June (Elisabeth Moss) hand her newborn off to the fleeing Emily (Alexis Bledel) and choose instead to stay in Gilead and fight, or resist, or something.

The decision, no longer being dictated by Atwood’s book, was controversial. The Handmaid's Tale Analysis.