A Home for Multipotentialites! Introducing the Happy Startup Canvas — The Happy Startup School. Too much of the startup world focuses on the mechanics of starting a business. 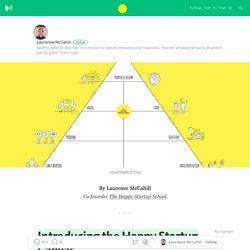 Whilst it’s good to move fast and stay lean, it’s time we made our businesses more human and in the process gave them a better chance of survival. If you run a business you’ll often be asked: What’s your exit strategy? I’ve always found this to be a strange question, probably because I didn’t set out in business with the aim of selling it for a handsome dime. I wanted to take control of my life, do things my way and ultimately build a business in my image. “When you take money from investors their business model becomes yours.”Steve Blank Startup founders should be creating companies so that they can live according to their own rules, not someone else’s – especially investors or shareholders. A lean business model canvas for social entrepreneurs. Gardening is the Best Metaphor for Everything. Even Engineering.

Image credit: Me I seem to be having the same conversation over-and-over again recently - or at least a very similar one. 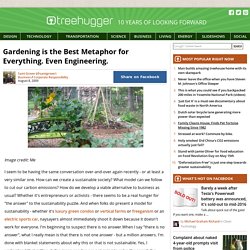 Biomimicry Challenge: TOA Uses Fungi to Reimagine Sustainable Neighborhoods. As cities redevelop to provide greener, more efficient living and working environments for their residents, the greatest innovation happens in ecodistricts, small pockets of a city where planners can experiment with more sustainable practices. 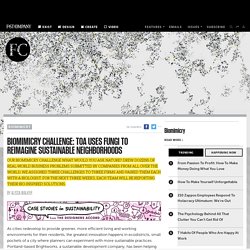 Portland-based Brightworks, a sustainable development company, has been helping neighborhoods create long-term plans so that they can receive funding under the City of Portland's EcoDistricts Initiative, a new program that hopes to accelerate sustainable neighborhood development throughout the city. This problem was given to Mexico City-based architectural firm Taller de Operaciones Ambientales. Brightworks' Erin Leitch was able to come to Mexico City to introduce the challenge to the team, and in this video you can see her introduce what the designers would come to see as the most important area of focus for their problem-solving: The concept of neighborhood boundaries and how information is easily exchanged through those borders. Living Systems Thinking. Review: How to Think Like Leonardo da Vinci.

A few months ago, Luciano Passuello from Litemind suggested me to read the book How to Think Like Leonardo da Vinci by Michael J. 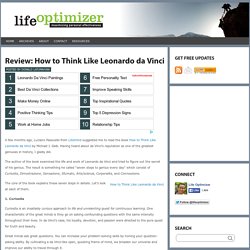 Gelb. Having heard about da Vinci’s reputation as one of the greatest geniuses in history, I gladly did. The author of the book examined the life and work of Leonardo da Vinci and tried to figure out the secret of his genius. The result is something he called “seven steps to genius every day” which consist of Curiosita, Dimostrazione, Sensazione, Sfumato, Arte/scienza, Corporalita, and Connessione. The core of the book explains these seven steps in details. 1. Seven Lessons for Leaders in Systems Change. Ecoliteracy.org Seven Lessons for Leaders in Systems Change A report from the field. 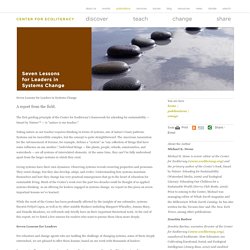 The first guiding principle of the Center for Ecoliteracy's framework for schooling for sustainability — Smart by Nature™ — is "nature is our teacher. " Taking nature as our teacher requires thinking in terms of systems, one of nature's basic patterns. Systems can be incredibly complex, but the concept is quite straightforward. Living systems have their own dynamics. 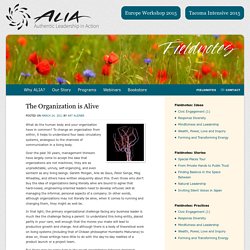 To change an organization from within, it helps to understand four basic circulatory systems, analogous to the channels of communication in a living body. Over the past 30 years, management thinkers have largely come to accept the idea that organizations are not machines; they are as unpredictable, unruly, self-organizing, and even sentient as any living beings. Gareth Morgan, Arie de Geus, Peter Senge, Meg Wheatley, and others have written eloquently about this. Even those who don’t buy the idea of organizations being literally alive are bound to agree that hard-nosed, engineering-oriented leaders need to develop virtuosic skill at managing the informal, personal aspects of a company. In other words, although organizations may not literally be alive, when it comes to running and changing them, they might as well be.

AskNature. Linda Booth Sweeney > Thinking About Systems > 12 Living System Principles. There are living systems on all scales, from the smallest plankton to the human body to the planet as a whole. 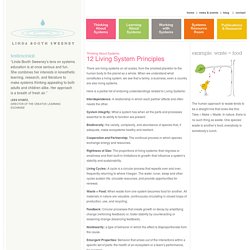 When we understand what constitutes a living system, we see that a family, a business, even a country are also living systems. Here is a partial list of enduring understandings related to Living Systems: Interdependence: A relationship in which each partner affects and often needs the other. System Integrity: What a system has when all the parts and processes essential to its ability to function are present. Biodiversity: the variety, complexity, and abundance of species that, if adequate, make ecosystems healthy and resilient.

Cooperation and Partnership: The continual process in which species exchange energy and resources. Rightness of Size: The proportions of living systems–their bigness or smallness and their built-in limitations to growth–that influence a system’s stability and sustainability. Waste = Food: When waste from one system becomes food for another. Systems Thinking Resources. Concepts and Frameworks The Five Learning Disciplines. 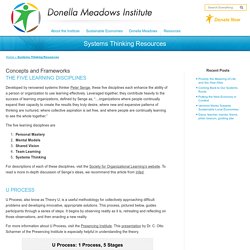