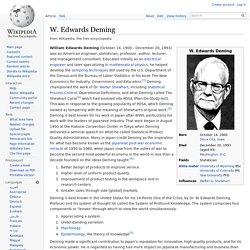 Educated initially as an electrical engineer and later specializing in mathematical physics, he helped develop the sampling techniques still used by the U.S. Department of the Census and the Bureau of Labor Statistics. In his book The New Economics for Industry, Government, and Education,[1] Deming championed the work of Dr. Walter Shewhart, including Statistical Process Control, Operational Definitions, and what Deming called The Shewhart Cycle[2] which had evolved into PDSA (Plan-Do-Study-Act). This was in response to the growing popularity of PDSA, which Deming viewed as tampering with the meaning of Shewhart's original work.[3] Deming is best known for his work in Japan after WWII, particularly his work with the leaders of Japanese industry. Overview[edit] In 1993, he founded the W. Family[edit] Early life and work[edit] Dr. Denomination effect. The denomination effect is a theoretical form of cognitive bias relating to currency, whereby people are less likely to spend larger bills than their equivalent value in smaller bills. 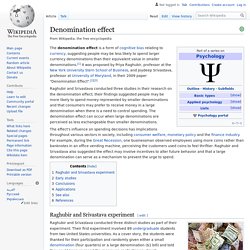 It was proposed by Priya Raghubir and Joydeep Srivastava in their 2009 paper "Denomination Effect".[1][2] In an experiment conducted by Raghubir and Srivastava, university students were given a dollar, either in quarters or as a single dollar bill. The students were then given the option to either save the money they had been given or to spend it on candy. Consistent with the theory, the students given the quarters were more likely to spend the money they were given.[3] 13 Strategies To Jumpstart Your Productivity. Looking to increase your productivity? 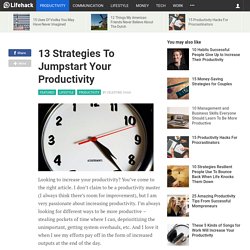 You’ve come to the right article. I don’t claim to be a productivity master (I always think there’s room for improvement), but I am very passionate about increasing productivity. I’m always looking for different ways to be more productive – stealing pockets of time where I can, deprioritizing the unimportant, getting system overhauls, etc. And I love it when I see my efforts pay off in the form of increased outputs at the end of the day. In this article, I have selected 13 of my best productivity strategies – tried, tested and validated. Here they are :D 1. Probably half of the self-help articles out there keeps telling us to set goals and set targets. I do regular goal setting to maximize my output. Be clear on what exactly you want to achieve. Further reading: 15 Time Boxing Strategies to Get Things Done. Putting it simply, time boxing is the most effective time management tool that I know of. 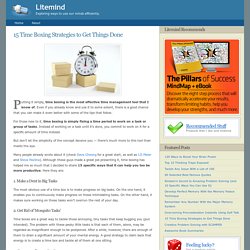 Even if you already know and use it to some extent, there is a good chance that you can make it even better with some of the tips that follow. For those new to it, time boxing is simply fixing a time period to work on a task or group of tasks. Instead of working on a task until it’s done, you commit to work on it for a specific amount of time instead. But don’t let the simplicity of the concept deceive you — there’s much more to this tool than meets the eye. Many people already wrote about it (check Dave Cheong for a great start, as well as J.D Meier and Steve Pavlina). 1.

The most obvious use of a time box is to make progress on big tasks. Seven Productivity Myths, Debunked by Science (and Common Sense) How to Become a Late Riser: 5 Reasons Why Sleeping In Every Day Will Boost your Productivity – Life Evolver. There is no hope for a civilization which starts each day to the sound of an alarm clock. 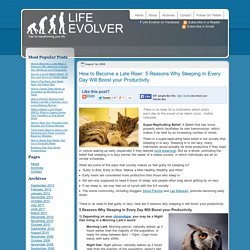 -Author Unknown Super-Replicating Belief: A Belief that has some property which facilitates its own transmission, which makes it be held by an increasing number of minds. There is a super-replicating false belief in our society that sleeping in is lazy. Sleeping in is not lazy- many individuals would actually be more productive if they slept in versus waking up early (especially if they learned lucid dreaming). But as a whole, promoting the belief that sleeping in is lazy serves the needs of a stable society, in which individuals are all on similar schedules. What are some of the ways that society makes us feel guilty for sleeping in? Cognitive… by Luc P. Beaudoin. There's no shortage of general productivity tools and information, such as David Allen's Getting Things Done. 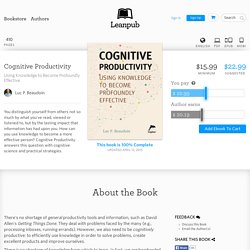 They deal with problems faced by the many (e.g., processing inboxes, running errands). However, we also need to be cognitively productive: to efficiently use knowledge in order to solve problems, create excellent products and improve ourselves. There is no shortage of knowledge from which to learn. In fact, we are bombarded with so much information that some claim we are condemned to "The Shallows" described by Nicolas Carr. That is to be superficial information processors whose brains are (supposedly) being "rewired" by the Internet. This book, however, rejects intellectual defeatism in favour of cognitive productivity.