10 Reasons Business Blogging is Better than Facebook [Infographic] What are Words Worth? By Stuart Boardman, KPN “Words are stupid, words are fun Words can put you on the run. 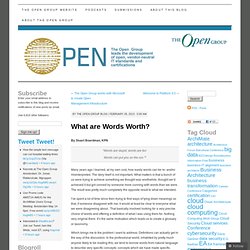 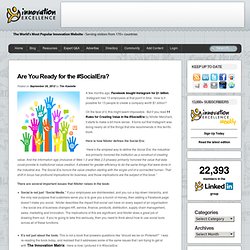 What Is The Kryptonite Of The Millennial Generation? No generation is just a single dimension or can be defined by a single thing. 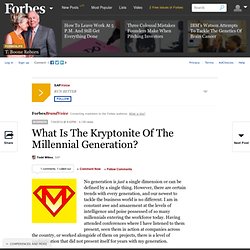 However, there are certain trends with every generation, and our newest to tackle the business world is no different. I am in constant awe and amazement at the levels of intelligence and poise possessed of so many millennials entering the workforce today. Having attended conferences where I have listened to them present, seen them in action at companies across the country, or worked alongside of them on projects, there is a level of sophistication that did not present itself for years with my generation. Follow my leader: Retailers race to catch digital rivals. 30 August 2012Last updated at 19:00 ET Viewpoint by Karmesh Vaswani Infosys Shoppers are increasingly letting the barrier between digital and bricks and mortar blur when it comes to retailers. 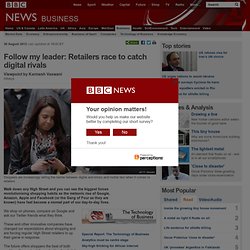 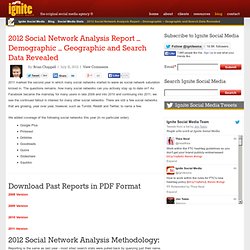 The questions remains, how many social networks can you actively stay up to date on? As Facebook became the mainstay for many users in late 2009 and into 2010 and continuing into 2011, we see the continued fallout in interest for many other social networks. There are still a few social networks that are growing, year over year, however, such as Tumblr, Reddit and Twitter, to name a few. We added coverage of the following social networks this year (in no particular order): Google PlusPinterestDribbbleGoodreadsQuoraSlideshareSquidoo 2012 Social Network Analysis Methodology: 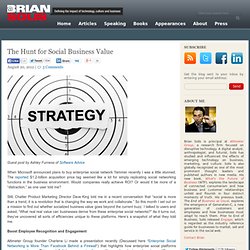 The reported $1.2-billion acquisition price tag seemed like a lot for simply replicating social networking functions in the business environment. Would companies really achieve ROI? Social Network Size Linked to Brain Size. As humans, we aren't born with formidable armaments or defenses, nor are we the strongest, fastest, or biggest species, yet despite this we are amazingly successful. 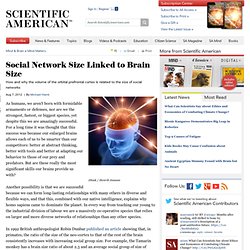 For a long time it was thought that this success was because our enlarged brains allows each of us to be smarter than our competitors: better at abstract thinking, better with tools and better at adapting our behavior to those of our prey and predators. But are these really the most significant skills our brains provide us with? Another possibility is that we are successful because we can form long-lasting relationships with many others in diverse and flexible ways, and that this, combined with our native intelligence, explains why homo sapiens came to dominate the planet.

Finally, a look at the people who use Twitter. InShare385 The days of “I don’t get Twitter” may soon pass. 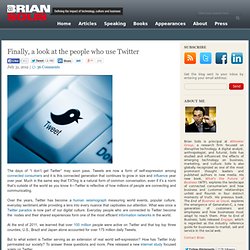 Tweets are now a form of self-expression among connected consumers and it is this connected generation that continues to grow in size and influence year over year. Much in the same way that TXTing is a natural form of common conversation, even if it’s a norm that’s outside of the world as you know it—Twitter is reflective of how millions of people are connecting and communicating. Over the years, Twitter has become a human seismograph measuring world events, popular culture, everyday sentiment,while providing a lens into every nuance that captivates our attention. What was once a Twitter paradox is now part of our digital culture.

At the end of 2011, we learned that over 100 million people were active on Twitter and that top top three counties, U.S., Brazil and Japan alone accounted for over 175 million daily Tweets. Why Enterprise Social Media Firms Are Being Gobbled Up. For a handful of enterprise social media firms, 2012 has been a version of 1999. 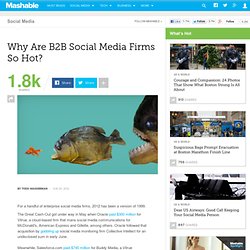 The Great Cash-Out got under way in May when Oracle paid $300 million for Vitrue, a cloud-based firm that mans social media communications for McDonald's, American Express and Gillette, among others. Oracle followed that acquisition by gobbling up social media monitoring firm Collective Intellect for an undisclosed sum in early June. Meanwhile, Salesforce.com paid $745 million for Buddy Media, a Vitrue competitor that counts Ford Motor and Hewlett-Packard among its clients. Soon after, reports circulated that Microsoft was interested in buying Yammer, a provider of a Facebook-type solution for businesses, for $1 billion or so. What Happens To Your Twitter When You Die? Creating A Social Media Will. Let’s Call It What It Is: Pervasive Communication. I don’t want to talk about social media. 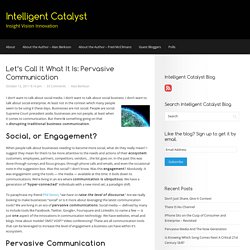 Harvard and MIT launch edX to offer free online classes - May. 2. The first official set of edX courses will be announced this summer, and will begin in the fall. NEW YORK (CNNMoney) -- Always wanted to take a Harvard class? Soon you'll be able to do so from the comfort of your own home. Harvard and MIT announced a partnership Wednesday to offer free online courses to students around the world. The initiative, known as edX, will be run by a non-profit organization controlled by the two schools. Each has committed $30 million to the effort. Open Source. Crowdsourcing. An Introduction to Recorded Future: An ability to leverage the predictive power of the web. Moodle.org: open-source community-based tools for learning.

Big Data Analytics, Business Intelligence and the Mind of Sherlock Holmes. “My name is Sherlock Holmes. It is my business to know what other people do not know.” — The Adventure of the Blue Carbuncle Sherlock Holmes turned 125 years old last year, and he’s never been more alive and well. The world seems more captivated by Sir Arthur Conan Doyle’s legendary London detective than ever before. Much of this excitement has been driven recently by the smash BBC One TV series Sherlock, drawing rave reviews for its update of Holmes and Dr. Watson as present-day Londoners fighting 21st-century crime. Pop culture critic and author John Powers cleverly explains Holmes’ enduring appeal as a literary hero and cultural icon: Sherlock Holmes “possesses no superpowers — his parents weren’t wizards, no radioactive spider bit him — [and yet] his gifts are cool enough to be superhuman. A quick review of Conan Doyle’s novels and short stories reveals Sherlock Holmes shared useful advice on effectively accessing, analyzing — and yes, unifying — information.

Two Champions Are Crowned: Windows 7 And Linux : Web Browser Grand Prix 9: Chrome 17, Firefox 10, And Ubuntu. Web Browser Grand Prix Champion: The Windows Circuit With a higher combination of wins and strong finishes, and the same number of losses, Firefox barely pulls off another victory over Chrome. While Mozilla solidified its lead over Google in WBGP VIII, Chrome all but took that lead back, returning Firefox to the tenuous victory is pulled off in WBGP 7. Opera remains in a comparatively distant third place, while Safari is even further behind. Meanwhile, IE9 is looking more like IE8 in the face of its fast-paced competition. Web Browser Grand Prix Champion: The Linux Circuit. Raspberry Pi? Buying frenzy crashes website. A new British computer that costs a mere £22 ($35) has experienced such high levels of demand that its website crashed.

Launched this morning at 6.00 am GMT, the credit-card sized Linux computer immediately sold out -- crashing not only the official launch website but also other manufacturers that sell the machine. The Raspberry Pi Foundation has had to replace the original website with a static page offering details of sales partners and offering updates via its @Raspberry_Pi Twitter account. The website message reads: "We've temporarily changed to a static site, while we're experiencing a very high level of traffic for the launch of the Raspberry Pi. The full site will return once traffic levels have subsided, hopefully later on today.

" Today's sales were limited to one per customer, so as many people as possible could purchase one of the devices. Related: Mozilla announces marketplace for open web apps. Foursquare ditches Google Maps for open source data. IE holds rival browsers at bay. For Microsoft's Internet Explorer team, stasis is bliss. In February's worldwide usage statistics, IE largely held at bay its top challengers, Mozilla's Firefox and Google's Chrome, according to Net Applications' latest measurements. IE has done so for a few months now, a big improvement for Microsoft compared to years of losing share. IE dipped from 53.0 percent of global usage in January to 52.8 percent in February among desktop browsers; Firefox and Chrome stayed level at 20.9 percent and 18.9 percent, respectively. Safari popped up a notch from 4.9 percent to 5.2 percent, and Opera was unchanged at 1.7 percent.

Colin Hope-Murray Trending. Your Reputation Is Your Résumé. Building a career isn’t what it used to be—and we’re not talking about the sputtering economy or the 13.3 percent unemployment rate among 20-to-24-year-olds. College graduates entering the job market are supplementing and sometimes circumventing the traditional job-search routine of combing want ads and sending out résumés. Unskilled and Unaware of It. 80% Of People Aren't Using LinkedIn The Way They're Supposed To.

TCheese Copywriter (teecheese) on Pinterest. VisualDatas: [infographics] The 500 Yea... Enterprise-class Critical Information Exchange Solutions. Is Social Media Actually Making Us Less Connected? Free speech haven or lawless cesspool – can the internet be civilised? When a south London teenager uploaded a series of amateur rap videos to YouTube, he had no reason to believe they would make legal history. Google's Schmidt Predicts an Android for Everyone on the Planet.

Identity and Security. Copyright and License. Building an Enterprise Architecture value proposition using TOGAF® 9.1. and ArchiMate 2.0. It is time to ‘breakout’ of social media’s marketing beach head. The Architecture of a Social Business. Early Indicators: The Rise of the CIO of Marketing. Lean StartUp Movement turning some heads. Social Media and Architecture - Connecting the Dots. Delivering innovation overnight. Here Comes The Open Web — Embrace It.