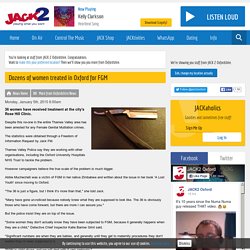 Despite this no-one in the entire Thames Valley area has been arrested for any Female Genital Mutilation crimes. The statistics were obtained through a Freedom of Information Request by Jack FM. Thames Valley Police say they are working with other organisations, including the Oxford University Hospitals NHS Trust to tackle the problem. However campaigners believe the true scale of the problem is much bigger. Abbie Muchecheti was a victim of FGM in her native Zimbabwe and written about the issue in her book 'A Lost Youth' since moving to Oxford.

"The 36 is just a figure, but I think it's more than that," she told Jack. "Many have gone un-noticed because nobody knew what they are supposed to look like. But the police insist they are on top of the issue. "Significant numbers are when they are babies, and generally until they get to maternity procedures they don't realise they've been subjected to it. Oxford Summer Campaign on FGM. Local charity Oxford Against Cutting, has released a new message this summer to help protect girls at risk of female genital mutilation (FGM). 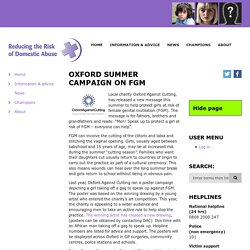 The message is for fathers, brothers and grandfathers and reads: “Men! Speak up to protect a girl at risk of FGM – everyone can help”. FGM can involve the cutting of the clitoris and labia and stitching the vaginal opening. Girls, usually aged between babyhood and 15 years of age, may be at increased risk during the summer “cutting season”. Families who want their daughters cut usually return to countries of origin to carry out the practice as part of a cultural ceremony. Last year, Oxford Against Cutting ran a poster campaign depicting a girl taking off a gag to speak up against FGM. Fatou Ceesay, Community Outreach Director of the charity, said “FGM, sometimes known as female circumcision, affects whole families and should not be seen as purely a “girls’ and women’s issue”. Rosedale Clinic, Reading Oxford, Berkshire holistic medicine, Acupuncture, Bio-resonance. Dozens of women treated in Oxford for FGM - JACK 2.

NHS discriminates against women with FGM. 3.20 Female Genital Mutilation. We use cookies to track usage and preferences. 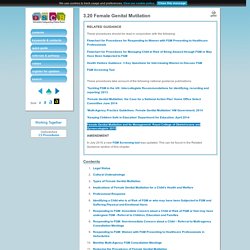 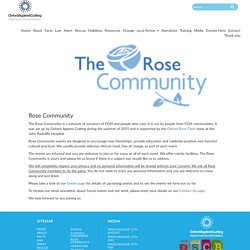 It is run by people from FGM communities. It was set up by Oxford Against Cutting during the summer of 2015 and is supported by the Oxford Rose Clinic team at the John Radcliffe Hospital. Rose Community events are designed to encourage new friendships, provide education and celebrate positive, non-harmful cultural practices. We usually provide delicious African food, free of charge, as part of each event. The events are informal and you are welcome to join us for some or all of each event.

We will completely respect your privacy and no personal information will be shared without your consent. FGM At a glance 2015. Oxford Rose Clinic. Kenyan female genital mutilation cutter describes FGM as 'like Christmas' in shock exposé. Back in 2011, Kenya became the latest in a string of African countries to ban female genital mutilation, passing a law to make it illegal to practice FGM or to take someone abroad to be 'cut'. 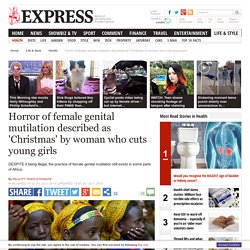 But a recent expose has revealed the ancient act is still being undertaken under misguided beliefs. Anna-Moora Ndege, 86, was approached by the MailOnline in her village in Kenya about her cutting regime - a practice she first began undertaking 70 years ago. Speaking about why she still insists on procedures that involve partial or total removal of the external female genitalia on girls as young as nine - or other injury to the female genital organs for non-medical reasons. She said: "Girls are cut to ensure they remain faithful because the sexual organ is not there anymore. When you are cut you will not be a slut looking for men here and there like a prostitute. "You are docile, waiting for your husband because after you are cut, sex is for having children not for anything else. 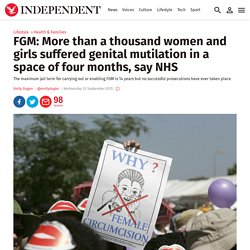 These included nine victims under the age of 18. Records from hospitals, GP surgeries and mental health centres show there were 1,036 newly-recorded cases of female genital mutilation (FGM) in England between April and June this year. This is the first quarter that the NHS has recorded FGM rates in the country. UNICEF: 200 Million Women And Girls Have Suffered Genital Mutilation. Over 200 million women and girls in 30 countries have experienced some form of genital mutilation, according to a new UNICEF report. 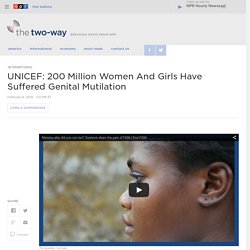 And if current trends continue, the number of girls cut annually will continue to rise year over year, the U.N. says, since population growth is outstripping efforts to reduce the practice. But on Saturday, the U.N.'s International Day of Zero Tolerance for Female Genital Mutilation, the organization wants to sound a hopeful note. "Never before has it been more urgent, or more possible, to end the practice of female genital mutilation," Secretary-General Ban Ki-Moon said in a statement leading up to the dedicated day. "I am encouraged by the rising chorus of young voices demanding an end to the practice," he said. Ban specifically highlighted the Masaai cricket players working to end FGM, the awareness campaign run by The Guardian newspaper in Great Britain and the work of Somalia's Edna Adan. 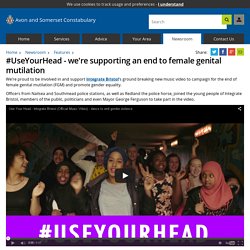 Officers from Nailsea and Southmead police stations, as well as Redland the police horse, joined the young people of Integrate Bristol, members of the public, politicians and even Mayor George Ferguson to take part in the video. The music video was produced by Zed Productions and the song was co-written by Rosina Buck and Naela Rose, in collaboration with the young people of Integrate Bristol. Two women FGM suspects flee UK with ‘victims’ and at-risk girls. Two women arrested by police over accusations of inflicting female genital mutilation have fled Britain with their alleged victims and other at-risk girls in a blow to efforts to secure a landmark first conviction. 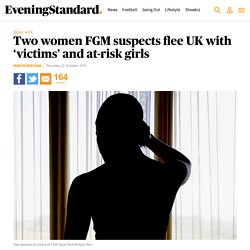 They were detained in separate investigations into suspicions that children had been mutilated and that further FGM offences might be committed. Sources say there was strong evidence in both cases. Police wanted social workers responsible for the girls’ care to obtain court orders that would have protected the children from further risk and prevented them from being taken out of the country. 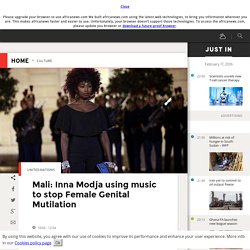 She made the call for global action during a recent performance in New York to mark the International Day for Zero Tolerance for Female Genital Mutilation. “As an African woman I went through Female Genital Mutilation. I know what it is and I know how harmful it is. FGM: Brisbane couple charged with taking two girls to Africa for procedure. A Brisbane couple has been charged with taking two girls to Africa to undergo female genital mutilation in what is believed to be the first prosecution of its kind in Queensland. Detectives from the Logan district child protection and investigation unit allege the pair took the sisters, aged nine and 12, to Africa for the procedure in April. The man, 53, and the woman, 41, both of Underwood, each face two counts of removing a child from the state for female genital mutilation, a charge which carries a penalty of up to 14 years’ jail.

Insp Christopher Jory said the practice of taking children overseas for the procedure – a tradition in some west African communities – was a “serious criminal offence” under Queensland laws introduced in 2000. Jory said it was the first time he was aware of that charges under those laws had been laid in Queensland. The charges follow a joint investigation between police, Queensland health and the department of community services. Kenyan police rescue hundreds of girls due to undergo FGM. Police in Kenya have rescued hundreds of girls from female genital mutilation before ceremonies often seen as a rite of passage to adulthood begin this weekend. An increase in tipoffs from community activists and officers on the ground in remote regions, where FGM is most commonly practised, is already paying dividends, according to politicians and police chiefs.

School teachers in the West Pokot region are playing their part in the growing resistance to the practice by sheltering girls who go on the run after refusing FGM, known locally as “the cut”. “In the past three weeks we have made eight arrests. We only made one arrest for the whole of last year,” said Alasow Hussein, deputy county commissioner for Marakwet, one of the areas where FGM is most widely practised. “We have also physically rescued many, many girls. Over the past fortnight in Kuria and Marakwet, the circumcisers started early and reports were received by community activists using social media networks.