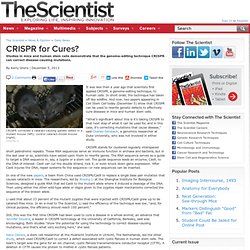 CRISPR corrected a cataract-causing genetic defect in a mutant mouse (left); control cataract-model mouse (right).JINSONG LIIt was less than a year ago that scientists first applied CRISPR, a genome-editing technique, to human cells. In short order, the technique has taken off like wildfire. And now, two papers appearing in Cell Stem Cell today (December 5) show that CRISPR can be used to rewrite genetic defects to effectively cure diseases in mice and human stem cells. “What’s significant about this is it’s taking CRISPR to that next step of what it can be used for, and in this case, it’s correcting mutations that cause disease,” said Charles Gersbach, a genomics researcher at Duke University, who was not involved in either study. 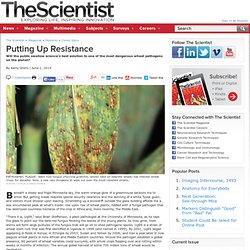 Now, a new race threatens to wipe out even the most resistant strains.© NIGEL CATTLIN/SCIENCE SOURCE Beneath a steely and frigid Minnesota sky, the warm orange glow of a greenhouse beckons me to enter. But getting inside requires special security clearance and the donning of a white Tyvek gown, and visitors must shower upon leaving. Scrambling up a snowdrift outside the glass building affords me a less encumbered peek at what’s inside: row upon row of wheat plants, riddled with a fungal pathogen that has destroyed countless hectares of the crop in Africa and, more recently, the Middle East. Designer Livestock. In the mid-1990s, microbiologist Cecil Forsberg of the University of Guelph in Ontario and his colleagues thought they’d achieved a pig production breakthrough: they had genetically engineered swine that could digest the phosphorous compounds in their feed. 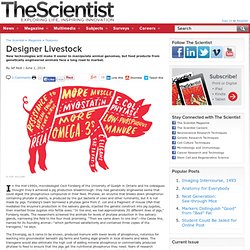 Phytase, an enzyme that breaks down phosphorus-containing phytate in plants, is produced by the gut bacteria of cows and other ruminants, but it is not made by pigs. Forsberg’s team borrowed a phytase gene from E. coli and a fragment of mouse DNA that mediated the enzyme’s production in the salivary glands, injected the genetic construct into pig zygotes, then inserted those zygotes into fertile sows. “In the end, we had approximately 30 different lines of pigs,” Forsberg recalls. Engineered Microbe Could Ease Switch to Grass. Researchers modify a heat-loving bacterium so it can produce biofuel from switchgrass directly, with no need for costly chemical and enzymatic treatments. 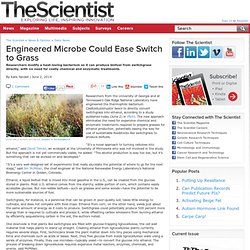 USDA-NRCS PLANTS DATABASE, ROBERT H. MOHLENBROCK Researchers from the University of Georgia and at Tennessee’s Oak Ridge National Laboratory have engineered the thermophilic bacterium Caldicellulosiruptor bescii to directly convert switchgrass into ethanol, according to a study published today (June 2) in PNAS. The new approach eliminates the need for expensive chemical and enzymatic treatments required to prepare grasses for ethanol production, potentially easing the way for use of sustainable feedstocks like switchgrass to produce biofuels. How Engineering the Human Body Could Combat Climate Change. Some of the proposed modifications are simple and noninvasive. 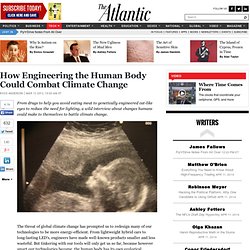 For instance, many people wish to give up meat for ecological reasons, but lack the willpower to do so on their own. The paper suggests that such individuals could take a pill that would trigger mild nausea upon the ingestion of meat, which would then lead to a lasting aversion to meat-eating. Other techniques are bound to be more controversial. For instance, the paper suggests that parents could make use of genetic engineering or hormone therapy in order to birth smaller, less resource-intensive children. 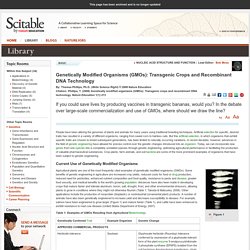 The expression of a nopaline synthase-human growth hormone chimaeric gene in transformed tobacco and sunflower callus tissue. Plant Molecular Biology 6, 347–357 (1986) Beyer, P., et al. Genetic Engineering. While scientific progress on molecular biology has a great potential to increase our understanding of nature and provide new medical tools, it should not be used as justification to turn the environment into a giant genetic experiment by commercial interests. 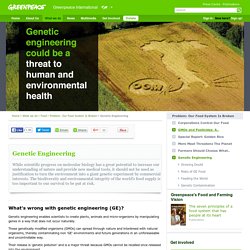 The biodiversity and environmental integrity of the world's food supply is too important to our survival to be put at risk. What's wrong with genetic engineering (GE)? Genetic engineering enables scientists to create plants, animals and micro-organisms by manipulating genes in a way that does not occur naturally. These genetically modified organisms (GMOs) can spread through nature and interbreed with natural organisms, thereby contaminating non 'GE' environments and future generations in an unforeseeable and uncontrollable way.

Their release is 'genetic pollution' and is a major threat because GMOs cannot be recalled once released into the environment. Genetic engineering debate rises again - Environment. Fifteen years ago, New Zealanders turned out in force to protest genetically engineered food but it has snuck onto our supermarket shelves regardless. 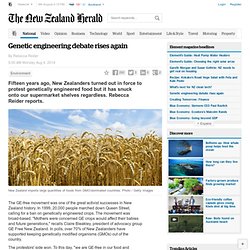 Rebecca Reider reports. The GE-free movement was one of the great activist successes in New Zealand history. In 1999, 20,000 people marched down Queen Street, calling for a ban on genetically engineered crops. What is genetic modification (GM)? Genetic modification is the use of modern biotechnology techniques to change the genes of an organism, such as a plant or animal. 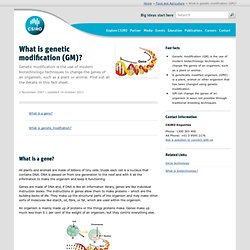 Find out all the details in this fact sheet. 2 November 2007 | Updated 14 October 2011 What is a gene? All plants and animals are made of billions of tiny cells. Inside each cell is a nucleus that contains DNA. Genes are made of DNA and, if DNA is like an information library, genes are like individual instruction books. Hidden green benefits of genetically modified crops - environment - 10 October 2012. FEARS about genetically modified foods are back on the agenda. 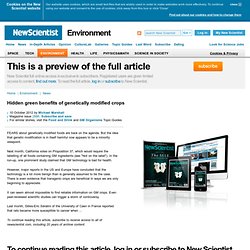 But the idea that genetic modification is in itself harmful now appears to be a minority viewpoint. Next month, California votes on Proposition 37, which would require the labelling of all foods containing GM ingredients (see ""). In the run-up, one prominent study claimed that GM technology is bad for health. Ethical, legal and social implications (ELSI) of human genomics. The Human Genome Project – discovering the human blueprint - Academy of Science. How the project began The idea of the Human Genome Project first began in a vague way in the 1970s when biologists started to investigate human genes at the molecular level.

Background Over the last 200 years, plants have been actively crossed to produce new and improved plants, with each cross resulting in the mixing of genetic material from both plants. In this process, even when the improved feature is successfully crossed into the original plant, additional, unwanted features can also be conferred in the breeding process. Benefits-of-gene-technology. Benefits of gene technology Gene technology is a tool that offers potentially enormous benefits, but since it is still a relatively new technology, it is important that use of genetically modified organisms (GMOs) and products from GMOs are carefully regulated.

In Australia, the Gene Technology Regulator has to be satisfied that a GMO or GM product is safe and can be well managed to protect human health and the environment. Human health Gene technology is helping scientists to develop more effective therapies for diseases like cancer, diabetes, hepatitis C and influenza. Gene technology. Gene technology provides the opportunity to improve human and animal health, create a safer and more sustainable food supply, and generate prosperity for Australia. Discover how gene technology impacts our lives and the research CSIRO is undertaking in this field. 24 June 2010 | Updated 16 December 2013 What is gene technology? Gene technology is the term given to a range of activities concerned with understanding the expression of genes, taking advantage of natural genetic variation, modifying genes and transferring genes to new hosts.