Meant to be, a criminal minds fanfic. Disclaimer: I do not own any rights to Criminal Minds. 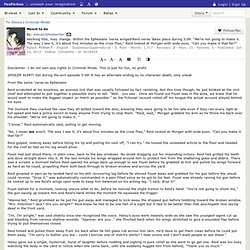 This is just for fun, no profit. SPOILER ALERT! Set during the evil episode 5.09! It has an alternate ending so no character death, only unsub From the same 'verse as Ephesians Reid scratched at his knuckles, an anxious tick that was usually followed by fact rambling. The moment they cracked the case they all bolted toward the door, knowing they were going to be too late even if they ran every light at full speed and had a police escort to keep anyone from trying to stop them. "I know," Reid automatically said, pulling to get moving. "No, I mean we aren't. Reid gulped, looking away before biting his lip and pulling his vest off, "I can try. " Foyet had just stood there, in plain view, back to the bay windows. Story: The Deal.

Warning gang Rape A pack is abducting friends in Chicago, and one must surrender for the others to survive... now they have the team, and the pack turns their focus on Reid... if he does not submit, his team will die. But will he survive the ordeal? – chelseabarron

To The Grave, a criminal minds fanfic. The neon-green light of the bedside clock told her it was half past two in the morning. 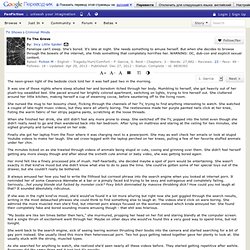 It was one of those nights where sleep alluded her and boredom itched through her body. Mumbling to herself, she got heavily out of her plush-toy swaddled bed. She paced around her brightly colored apartment, switching on lights, trying to tire herself out. She cluttered around her little kitchen, making herself a cup of steaming cocoa, before sauntering off to the living room. She nursed the mug to her bosomy chest, flicking through the channels of her TV, trying to find anything interesting to watch. When she finished her drink, she still didn't feel any more prone to sleep.

Agent Hotchner was not having a good day. Getting into a car accident with the youngest member of the team just made it a whole lot worse. No Slash. Lots of Whump. Sequel is up! Come again anothe day – chelseabarron 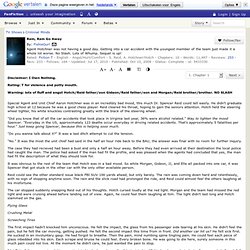 Warning: lots of fluff and angst Hotch/Reid father/son Gideon/Reid father/son and Morgan/Reid brother/brother. NO SLASH Special Agent and Unit Chief Aaron Hotchner was in an incredibly bad mood, this much Dr. Spencer Reid could tell easily. "Did you know that of all the car accidents that took place in Virginia last year, 36% were alcohol related. " "Do you wanna talk about it?

" Happy Birthday?, a criminal minds fanfic. Hey guys it's me Rae again, I've been working on my other story and I promise the next chapter will be up soon but after my other one shot (His last night on earth) I need to write something light and funny so I hope you enjoy :D Disclaimer: I don't own Criminal Minds or any music mentioned in this fic.

Reid is cleaning house and is in skinny jeans and v-neck shirt just a short one shot of his birthday. – chelseabarron

Hotch, Rossi, JJ, Prentiss, Morgan and Garcia were huddled around Hotch's desk in his office discussing how they were going to celebrate their youngest co-worker's birthday. 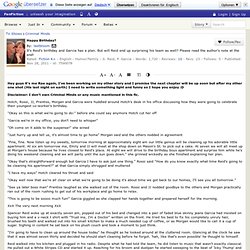 "Okay so this is what we're going to do-" before she could say anymore Hotch cut her off "Garcia we're in my office, you don't need to whisper" "Oh come on it adds to the suspense! " "Just hurry up and tell us, it's almost time to go home" Morgan said and the others nodded in agreement "Fine, fine. "Okay that's straightforward enough but Garcia I have to ask just one thing. " Emergency Room Chapter 1, a Grey's Anatomy + Criminal Minds Crossover fanfic. "Name please? 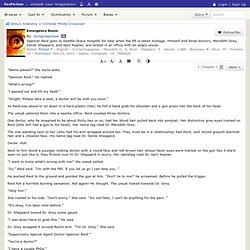 " the nurse asks. "Spencer Reid. " He replied. "World domination?   This is what you think about on plane rides when you forget to bring a book?” Some people were born oracles. 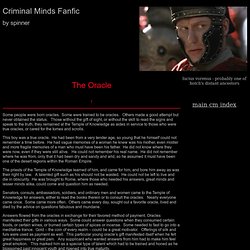 Some were trained to be oracles. Others made a good attempt but never obtained the status. Those without the gift of sight, or without the skill to read the signs and speak to the truth, they remained at the Temple of Knowledge as aides in service to those who were true oracles, or cared for the tomes and scrolls.

Reading the Bones Chapter 1: Monday Morning, a criminal minds fanfic. Disclaimer: I do not own Criminal Minds. 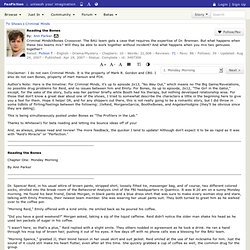 It is the property of Mark R. Gordon and CBS. I also do not own Bones, property of Hart Hanson and FOX. Home, Sweet Home Chapter 1, a criminal minds fanfic. UPDATE: I reposted this because there were a bunch of oops!

And it bugged me. 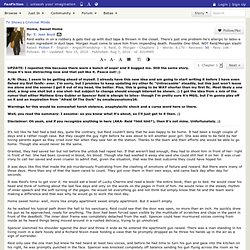 Still the same story. Hope it's less distracting now and that yall like it. Peace out! ;) A/N: Okay, I seem to be getting ahead of myself. Warnings for this would be somewhat harsh violence, anaphylactic shock and a curse word here or there. Night, a criminal minds fanfic. On Neptune Chapter 1: On Neptune, a criminal minds fanfic. The moment Aaron walked through that door, he knew they'd made a horrible mistake.

Part 1 and we see the revlation of Reid being raped by an unsub. – chelseabarron

The heavy, metal doors closed behind them, and they heard a lock fall into place, and then the horror began. 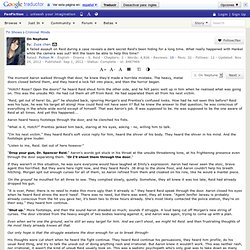 The Dilaudid's Spiderweb, a criminal minds fanfic. AN: Sooo, people, It's FINALLY here xD I've been working on it for almost every weekend 'till now (writing in my notebook, then re-writing it on my laptop is starting to go on my nerves dammit).. 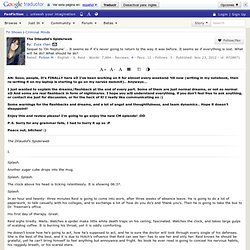 I just wanted to explain the dreams/flashback at the end of every part. Some of them are just normal dreams, or not so normal xD And some are real flashback in form of nightmares. I hope you will understand everything, if you don't feel free to ask anything, or contact me just for discussion, or for the heck of it! Sight of a Killer Chapter 1, a criminal minds fanfic. Sight of a killer I came up with this while I was waiting for a friend. I'm Safe Chapter 1, a criminal minds fanfic. Chapter 1: Being Sick "Reid, you're burning up! " said Morgan "Ermm…what? " asked Reid, starting to blink his eyes and finally his vision found Morgan kneeling beside him. What was i thinking? Chapter 1: Pause and savor, a criminal minds fanfic. I decided to join the vampire act in her Reid drabbles.

Thank you so much, my dear. Chapter 1- Pause and savor He caught sight of his co worker through a gap between two books. The young profiler was happily perusing the new titles; head bent at a ninety degree angle to better read the words on the spines, when he spied newest team member and world renowned profiler Dave Rossi in the do-it yourself section. His immediate instinct was to rush over and engage him in one of the theories outlined in his work but he paused at the top of the aisle. Reid was stunned by the little smile on the older man's face and needed no second invitation when the man gave him a come hither gesture. 'Hi, sir!

' He instinctively hunched his shoulders as the patrons glared at him. Uplifted, a criminal minds fanfic. Wow, it's been a long time! Fortunately I was feeling inspired... This was written for Criminal Minds Kink Meme IV prompt: Reid is captured by an unsub (it's a cliché for a reason) who uses his victims for experiments. When the team finds him they expect the worst, but Reid seems relatively unharmed except for the fact that he now has wings. Spoilers/Warnings: None, really.Rating: Gen. PG+ ish The screech of tires rubbing against slick asphalt filled the early morning air as the large, black SUV jerked to a sudden stop. Miss_zedem - Fic: Stumble Through Tonight (Criminal Minds: Hotch/Reid, Hotch/Beth) Only Human, a criminal minds fanfic. Title: Human Weakness Summary: Anyone else notice Spencer's change from latex to Nirtile gloves? Well I did. Rating: PG-13 Here they were in the back water Mississippi where they were once again faced with the rather disbelieving faces of the local law enforcement.