The Innocent Ones, a criminal minds fanfic. A/N- This is a story I started about two years ago, and have finally got around to finishing it. 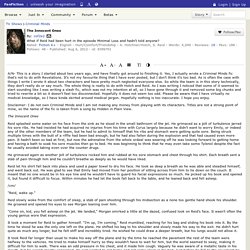 Yes, I actually wrote a Criminal Minds fic that's not to do with Revelations. It's not my favourite thing that I have ever posted, but I don't think it's too bad. As is often the case with things I write I wrote it about two characters and have pretty much neglected everyone else. So while the team is in this story technically, they don't really do or say much. The whole thing is really to do with Hotch and Reid. All Grown Up Chapter 9: That Sibling Thing, a criminal minds fanfic. AN: Sorry this has taken so long. 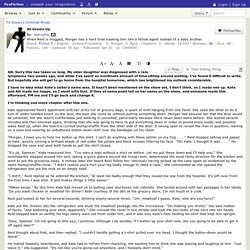 My older daughter was diagnosed with a rare lymphoma two weeks ago, and while I've spent an inordinate amount of time sitting around waiting, I've found it difficult to write. But hopefully she will get to go home from the hospital tomorrow, which has brightened my outlook considerably. Not to Blame, a criminal minds fanfic. "The worst guilt is to accept an unearned guilt. 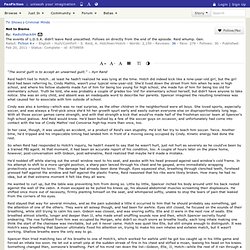 " – Ayn Rand Reid hadn't lied to Hotch...at least he hadn't realized he was lying at the time. Hotch did indeed kick like a nine-year-old girl, but the girl Reid had been referring to, Cindy Mathis, wasn't your typical nine-year-old. She'd lived down the street from him when he was in high school, and where his fellow students made fun of him for being too young for high school, she made fun of him for being too old for elementary school. Truth be told, she was probably a couple of grades too 'old' for elementary school herself, but didn't have anyone to take notice. She was an only child, and absent was an inadequate word to describe her parents. Cindy was also a tomboy—which was no real surprise, as the other children in the neighborhood were all boys.

Hotch and Reid are in a plane crash and the unsub is with them they must survive the unsub and the harsh mountain elements as well. No slash just loving friendship between the two. – chelseabarron

I know I promised to write an Emergency story next but this one wouldn't leave me alone. 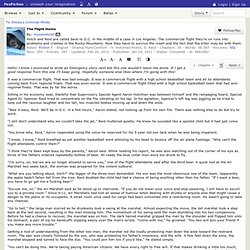 If I get a good response from this one I'll keep going. Hopefully someone else likes where I'm going with this! It was a commercial flight. That was bad enough. Sitting in his economy seat, thankful that Supervisory Special Agent Aaron Hotchner was between himself and the rampaging hoard, Special Agent Dr. "Take it easy, Reid. Magic, a criminal minds fanfic. Title: Magic Author: Kadeeleigh Rating: Mature Pairing: Hotch/Reid Slash Summary: The Department of Homeland Security wants to speak to Dr.

The Department of Homeland Security wants to speak to Dr. Spencer Reid, and the BAU team come along to the Montanna fun. Reid Whump of shooting and the minor part of the fic its a oneshot – chelseabarron

Spencer Reid, and the team wants to know why. 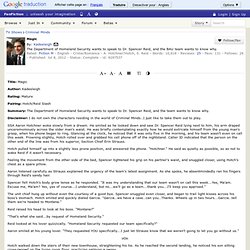 Disclaimer: I do not own the characters residing in the world of Criminal Minds…I just like to take them out to play. SSA Aaron Hotchner woke slowly from a dream. Hotch pulled himself up into a slightly less prone position, and answered the phone. Feeling the movement from the other side of the bed, Spencer tightened his grip on his partner's waist, and snuggled closer, using Hotch's chest as a spare pillow. Aaron listened carefully as Strauss explained the urgency of the team's latest assignment. Spencer felt Hotch's body grow tense as he responded. The unit chief hung up without even the courtesy of a good bye.

Good People, a criminal minds fanfic. Disclaimer: I don't own the show Criminal Minds or any of characters. 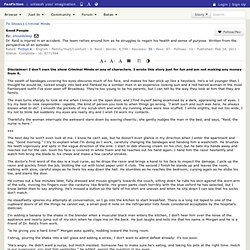 I wrote this story just for fun and am not making any money from it. The swath of bandages covering his eyes obscures much of his face, and makes his hair stick up like a haystack. He's a lot younger than I thought he would be, tucked snugly into bed and flanked by a somber man in an expensive looking suit and a red haired woman in the most flamboyant outfit I've ever seen off Broadway. They're too young to be his parents, but I can tell by the way they look at him that they are family. The man turns sharply to look at me when I knock on the open door, and I find myself being examined by a dark, appraising set of eyes.

Thankfully the woman interrupts the awkward stare down by waving cheerily; she gently nudges the man in the bed, and says, "Reid, the nurse is here. " Bad People Chapter 1, a criminal minds fanfic. This story is a companion piece to a one shot I wrote entitled "Good People". 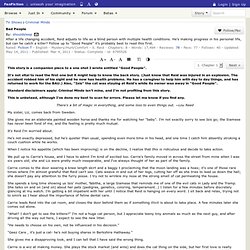 It's not vital to read the first one but it might help to know the back story. (Just know that Reid was injured in an explosion. The accident robbed him of his sight and he now has health problems. He has a caregiver to help him with day to day things, and has returned to work for the BAU.) Abstract Brilliance, a criminal minds fanfic. Title: Abstract Brilliance Rating: G Summary: Reid has a broken wrist. 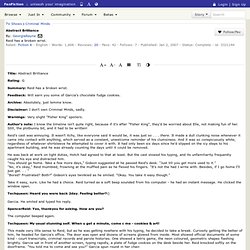 Not done but not the best at ALL! – chelseabarron

Down Pour Chapter 1: 8:00 am, a criminal minds fanfic. A/N: Here is my newest story. : ) Sometimes, when one person is missing, the whole world seems depopulated. - Lamartine 8:00 a.m.

The team takes on a case in Virginia during a rainy day but they find that they are quickly running out of time. When Reid is shot the case becomes personal and our favorite profiling team is reminded that every hour is vital to finding the children. One day im not kidding this all happens in one day. – chelseabarron

Cold and wet – two things that Spencer Reid separately loathed, even worse was when they combined their powers to create freezing rain. 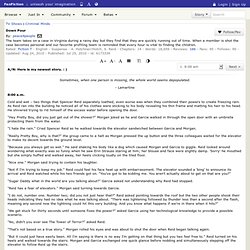 As Reid ran into the building he noticed all of his clothes were sticking to his body revealing his thin frame and matting his hair to his head. "Hey Pretty Boy, did you just get out of the shower? " "I hate the rain. " "Really Pretty Boy, why is that? " Bullpen Fan Fics - Fic: A Morgan Thanksgiving by SillyOldThing. Title: A Morgan Thanksgiving Author:SillyOldThingRating: K Characters/Pairings: Reid, Morgan Summary: Morgan takes a recovering Reid back to Chicago for Thanksgiving. - Chapter One 'The still small voice,' William Cowper. 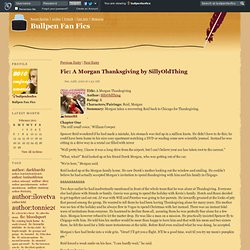 Every New Beginning Chapter 1: Surprise, a criminal minds fanfic. Author's note: I dusted this fic off, so to speak, from my file of unfinished stories.

It's set directly after 'Revelations' so there are definite mentions of events in that episode. Also mentioned are events from 'Aftermath' and 'The Boogymen', but I'm sure everyone already knows what happened anyway! I know this first chapter is short, but it changes POV after this so it seemed to be a good place to stop. The darkness enveloped him like a thick, heavy shroud. The dull light from the television in the corner did nothing to dispel his anxiety. He was suffocating, drowning, being swallowed by the darkness and the feelings and his thoughts. Every time he closed his eyes, he could smell the wet leaves and fresh dirt.

It was overwhelming. Terror. Too Much at Once Chapter 1, a criminal minds fanfic. AN: So this is unlike me because I usually do not do AU's.

Basically, this is a "what if" story. What if Reid's gunsot wound in "Facelss, Nameless" was a bit more serious? Slight AU to part of "Faceless, Nameless" so, spoilers for that episode. – chelseabarron

Buuut... I rewatched "Faceless, Nameless" and it suddenly became so obvious: I had to write this. Done :) So anyway, here is my idea on what could have happend. Warning: Major spoilers for "Faceless, Nameless" - the season opener for Season 5. A Taste of Home Chapter 1: The Injury, a criminal minds fanfic. Disclaimer: Usual disclaimer, I do not own any CM characters, I'm just borrowing them and will return them in the same condition as I found them.

Storyline Rules: There may be violence, mention of drugs and sex crimes -- this is Criminal Minds. All CM characters will remain true to character as I see them. This may be fantasy, but I will try my best to make sure anything presented as fact is accurate. The team watched in dismay as the unsub scrambled up a very rickety looking scaffold and disappeared onto the roof of the building. Grimly Morgan jumped and grabbed a support bar, which gave way under his weight. Reid looked at the thirty-foot-high scaffolding, the unsub had made it up there, obviously it was a weight issue, he holstered his weapon and said, "Morgan, give me a boost. " They heard pounding from above; apparently the door to the building was locked. Merry Chapter 1, a criminal minds fanfic. Written for The Vampire Act for the Christmas Gift Fic Exchange at Chit Chat on Authors Corner. Christmas song is Have Yourself a Merry Little Christmas. Prompts are Snow, Christmas Lights and Gingerbread Men.

Revenge is sweet with a bitter aftertaste Chapter 1: A wound of the mind, a criminal minds fanfic. Author's note: This fic changes time and point of view a few times. I've tried to make it very easy to follow, so I hope no one gets confused. This first chapter starts in what will be the present. Disclaimer: Even though I shamelessly stole the chapter title from "The Fisherking" part 1, I own no part of the CM empire. A wound of the mind Alex let his eyes scan the darkened street around him as he sipped slowly on his third cup of coffee. What could be taking so long? Injured, a criminal minds fanfic. AN- This thought just kept staying with me, and I couldn't ignore it any longer. But for all of the times Reid gets injured, we don't (generally) see much of the aftermath.