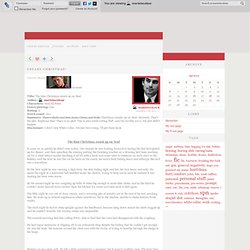 When you spend every waking moment trying to save someone else, sometimes you forget to save yourself. It's a lesson Neal learns the hard way after Peter is arrested. – chelseabarron

Title is from "Bridge Burning" by Foo Fighters.Word Count: ~ 9200Summary: When you spend every waking moment trying to save someone else, sometimes you forget to save yourself. 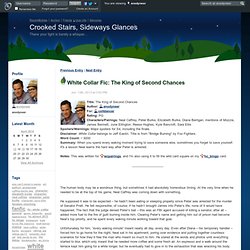 Front Man - usakeh - White Collar. He’d been up for hours dry heaving over the toilet.

What if Neal had been ill when the events in Front Man transpired? This story explores that very possibility. It also assumes that a polyamorous relationship exists between Neal, Peter and Elizabeth. (OT3) – chelseabarron

Every muscle in his body screamed in agony as he forced himself to his feet, body shaking as he took what felt like forever to pull on his suit. 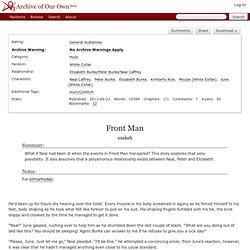 His shaking fingers fumbled with his tie, the knot sloppy and crooked by the time he managed to get it done. “Neal!” June gasped, rushing over to help him as he stumbled down the last couple of stairs. Turning Back That Blue Into Red. Title: Turning Back That Blue Into RedAuthor: embroideramaRating: RPairing: Peter/El/NealWord count: 5,650Spoilers: noneWarnings: noneSummary: Peter's not happy when Neal gets hurt trying to protect him. 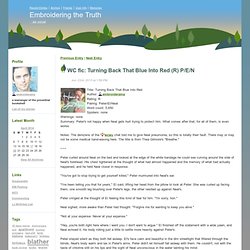 What comes after that, for all of them, is even worse. Notes: The denizens of the wcwu chat told me to give Neal pneumonia, so this is totally their fault. There may or may not be some medical hand-waving here. Peter curled around Neal on the bed and looked at the edge of the white bandage he could see curving around the side of Neal's forehead.

"You've got to stop trying to get yourself killed," Peter murmured into Neal's ear. "I've been telling you that for years," El said, lifting her head from the pillow to look at Peter. Peter cringed at the thought of El feeling this kind of fear for him. Neal sighed, more awake than Peter had thought. "Not at your expense. "Hey, you're both right here where I want you. "Hey, I thought maybe you were avoiding me. " "Never. "Me too. Curse of the Kouroi. A/N: This story is set in the future.

Peter, Neal, Sara, and Mozzie investigate art work that has been stolen from the Met's private collection, which Mozzie is convinced is cursed. – chelseabarron 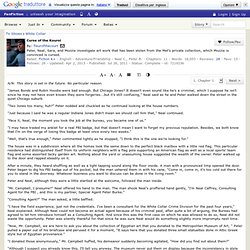 "James Bonds and Robin Hoodie were bad enough. But Chicago Jones? It doesn't even sound like he's a criminal, which I suppose he isn't since he may not have even known they were forgeries...but it's still confusing," Neal said as he and Peter walked down the street in the quiet Chicago suburb. "Two Jones too many, huh? " Down By the River.

Everyone always says you can drown in just a few inches of water, but, really? Neal and Peter where on simple survelince duty and Neal gets thrown from the peir – chelseabarron 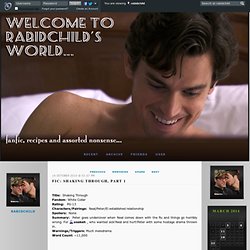 For usakeh , who wanted sick! Neal and hurt! Time stamp 4 Shaking through. Ganked from embroideramaand sahiya (and what the hell is wrong with me, I'VE GOT SHIT TO WRITE, but at least I got my WC BB draft in): Pick a fic of mine, any fic (White Collar one-shots here, White Collar series here, everything else here) and I will write at least 100 words of something -- could be prequel, time stamp, missing scene, alternate POV, alternate ending -- based on it. 1.

Part 2 of TShaking through this is a month after – chelseabarron

I will do this for the first 10 responses, though not necessarily in order. 2. 3. 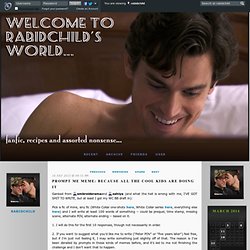 In Sickness and Health. And sometimes, there is id fic.

Why choose between emotional and physical hurt/comfort when you can have both IN THE SAME FIC? 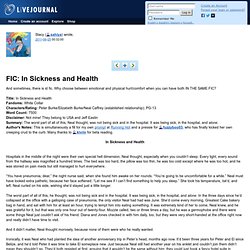 Title: In Sickness and HealthFandoms: White CollarCharacters/Rating: Peter Burke/Elizabeth Burke/Neal Caffrey (established relationship); PG-13Word Count: 7500Disclaimer: Not mine! They belong to USA and Jeff EastinSummary: The worst part of all of this, Neal thought, was not being sick and in the hospital. It was being sick, in the hospital, and alone.Author's Notes: This is simultaneously a fill for my own prompt at Running Hot and a pressie for fuzzyboo03, who has finally kicked her own creeping crud to the curb. Kivrin for beta reading. In Sickness and Health. You're the One who Summoned Me (ABove Any Other Kind) Title: You're the One who Summoned Me (Above any Other Kind) Rating: PG-13Characters/Pairings: Neal/Peter/El established relationship.Spoilers: NoneWord Count: ~3100Summary: Neal gets sick while El and Peter are away on vacation; there are voice mails and a lot of worry.

A/N: This is a fic for the lovely sahiya, who contributed to my help_midwest auction. 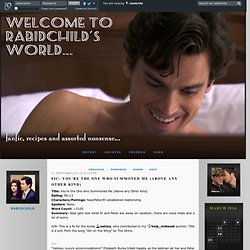 Title is a lyric from the song “Girl on the Wing” by The Shins. ----“Hellooo, luxury accommodations!” Peter tipped the bellman and saw him to the door. “It’s from Neal,” she reported, handing him the card that had been left with the fruit. They had just spent ten days on safari in Kruger National Park with El’s family, a trip long planned by her parents for their 50th anniversary. “That Neal,” Peter said with a fond smile, “always thinking ahead.” “It’s why we love him,” El said. “I don’t think even Hughes could’ve swung that one, hon.” “I know, but I miss his face.” “Later,” he replied. “Think it’s big enough for two, Mr. Turning Back That Blue Into Red. The Fidelity of Dogs. Title: The Fidelity of DogsRating: GCharacters/Pairings: Neal, Satchmo, El, Peter; genSpoilers: NoneContent Notice: Doggy smoochesWord Count: ~2,000Summary: Neal had been in the hospital and goes home with the Burkes to recover.

Neal had been in the hospital for a week and then he was taken home to the Burkes where Satch keeps him loving company. – chelseabarron 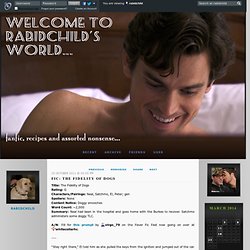 A/N: Fill for this prompt by virgo_79 on the Fever Fic Fest now going on over at whitecollarhc. “Stay right there,” El told him as she pulled the keys from the ignition and jumped out of the car. A case involving bond fraud had ended up with Neal taking a header off a yacht into Long Island Sound, which had led, eventually and down a very long track, to a nasty bout of pneumonia. And so here he sat, in the front seat of the Taurus being fussed over by his partner’s wife, who he suspected secretly got off on having someone to baby. The longest day. Name: The longest dayAuthor: marieincolourRating: GCharacters/Fandom: White Collar - Neal Caffrey, Peter Burke, etc.Genre: Hurt/comfortDisclaimer: I don't own White Collar or any of the characters.

This is simply fanfiction, and I'm not getting rich on it.Word count: 2882A/N: This is my contribution for the White Collar H/C Advent calendar. It's not betaed, so it's far from perfect. It's also shameless schmoop. An Agent A Day Keeps The Doctor Away Chapter 1, a white collar fanfic. Peter Burke and Neal Caffrey sat in the Ford Taurus which Peter had just parked in the parking lot at the Doctor's office.

Peter looked over at Neal and took in his appearance. Neal looked like death warmed over. He sat with his head against the window and his eyes closed. His skin looked ashy and sweat plastered his usually perfect styled hair to his forehead. But what really concerned Peter was that tremors shook Neal's body every few seconds. Peter got out of the car and walked around to the passenger's side and opened the door. Peter rolled his eyes. "Yeah, Neal. "Neal… It's ok. They sat in the waiting room along with a woman and her sick child who had the worst runny nose Peter had ever seen. Neal had his head leaned back on the wall with his eyes closed, but when he heard Peter laugh. "What're you laughing at? " Peter was sitting in the waiting room lost in thought about a case they had just closed when he heard the door open and saw Kay poke her head around the door. Brothers Chapter 1: Cold, a white collar fanfic. A/N This is my first fanfic so please take it easy on me.

The characters may be a little OOC. I'm not in the medical field and the only medical advice I have is called Google so it may not be completely accurate but I did my best. If it ain't broken. Title: If it ain't brokenAuthor: marieincolourGenre: Hurt/comfortWord count: 3450-ish.Characters/pairings: Peter/Neal/El. Nothing graphic.Warnings: Language? No spoilers.Rating: GDisclaimer: Not mine, only borrowing.A/N: What? I've written rambly, scruffy fluff again, you say?

Neal and Peter not FBI but two college kids and this is a series where Neal and Petere are together. Nela has Pneumonia – chelseabarron

Fic SchmoopWord Count: ~1200Beta Credit: None (Because coffeethyme4me is still sick).Summary: Continuing the story from Such Very Good Friends, another timestamp in my Wonder(ful) Years ‘verse (College A/U). Peter makes chicken soup for Neal and cares for him through a bad bout of pneumonia. The Wonder(ful) YearsSex On The BeachSuch Very Good Friends.