"Reduced To Rubble" Fandom: White CollarTitle: Reduced To RubbleAuthor: TeeJayGenre: GenCharacters/Pairings: Neal, PeterWritten for: nefhiriel for Caffrey-Burke Day 2012Prompt/Request: "Long-distance" whump - you know, over-the-phone communication, where one character is severely injured, and the other has to keep him conscious, and calmRating: PG-13Summary: Who knew the building would be unstable and collapse? 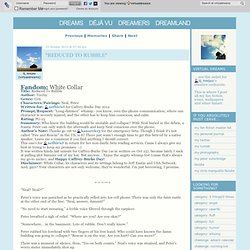 With Neal buried in the debris, a frantic Peter can only watch the aftermath and keep Neal conscious over the phone.Author’s Note: Thanks go out to kanarek13 for the emergency beta. Though I think it's not called "Fire and Rescue" in the US, is it? There just wasn't enough time to get this beta'ed by a native speaker.

Nefhiriel in return for her non-fanfic beta reading services. “Neal? Peter’s voice was panicked as he practically yelled into his cell phone. “No need to start swearing,” a feeble voice filtered through the earpiece. Peter breathed a sigh of relief. “Somewhere… in the basement. Virtual dreams - "Satyagraha" Fandom: White CollarTitle: SatyagrahaAuthor: TeeJayGenre: GenCharacters/Pairings: Neal, Peter, a little bit of ElizabethRating: PG-13Warning: More or less vague-ish spoilers for season 4 (up to and including 4x10).Summary: While Neal recovers from trauma, Peter delivers a rather cryptic Christmas card to him.Author's Note: Written for the White Collar 2012 H/C Advent Calendar – Day 19.Since some people asked for a continuation of my earlier ficlet “Reduced to Rubble”, ta-da! 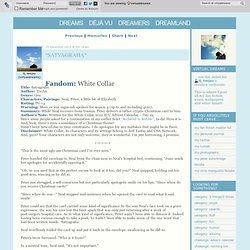 Here it is. And, look, there’s even a semblance of a Christmas theme! Hasn’t been beta’ed due to time constraints. I do apologize for any mistakes that might be in there.Disclaimer: White Collar, its characters and its settings belong to Jeff Eastin and USA Network. Write Me Back. When Peter came to, he was aware of three things. 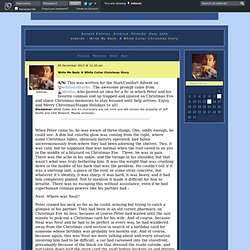 One, oddly enough, he could see. A dim but colorful glow was coming from the right, where some Christmas lights, obviously battery operated, had fallen unceremoniously from where they had been adorning the shelves. Two, it was cold, but he supposed that was normal when the roof caved in on you in the middle of a blizzard on Christmas Eve. Three, he was in pain. There was the ache in his ankle, and the twinge in his shoulder, but that wasn’t what was truly bothering him. Sometimes... - WC - Fate Misnamed. Title: Fate MisnamedAuthor: angelita26Rating: PGCharacters and/or Pairing: Gen – Neal, Peter, ElizabethWord Count: ~3100Summary: Neal heroically pushes Peter out of the way of an oncoming car only to get hit himself. 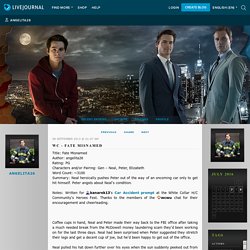 Peter angsts about Neal's condition. Notes: Written for kanarek13's Car Accident prompt at the White Collar H/C Community's Heroes Fest. Thanks to the members of the wcwu chat for their encouragement and cheerleading. Coffee cups in hand, Neal and Peter made their way back to the FBI office after taking a much needed break from the McDowell money laundering scam they'd been working on for the last three days. Neal pulled his hat down further over his eyes when the sun suddenly peeked out from behind the clouds. "Looks like a storm's blowing in," Peter commented as he stopped at the curb to wait for the traffic to thin out or the light to change. "It's that time of year. " Neal took a step to follow him and caught a strange movement out of the corner of his eye. Let's Shake Some Dust - [Fanfiction] I Was Looking at the Ceiling and Then I Saw the Sky. Title: I Was Looking at the Ceiling and Then I Saw the SkyAuthor: aragarnaCharaters: Neal, PeterGenre, rating: Gen, H/C, Friendship. 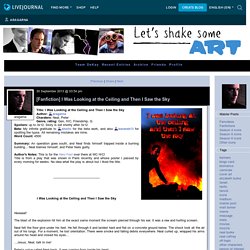 G.Spoilers: up to 3x12. The Best of Them Bleed It Out. Title: The Best of Them Bleed It OutAuthor: embroideramaRating: PG-13Pairing/Characters: Peter & NealWord count: 7,600Spoilers: S4 - set sometime after the beginning of S5 with very slight use of some spoilers for S5 (and totally ignoring other spoilers)Summary: Neal witnesses a car accident and doesn't hesitate to do everything he can to help the victims. 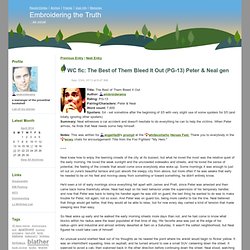 When Peter arrives, he finds that Neal needs some help himself. Notes: This was written for angelita26's prompt at the whitecollarhc Heroes Fest. Girl Who Got Away. Title: Girl Who Got Away Characters: Neal Caffrey, Diana Barrigan Pairings: Gen Rating: PG-13 Word count: ~ 3800 Disclaimer: I don’t own anything. 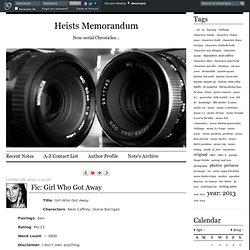 Everyday heroes. Title: Everyday heroesRating: PG13Warnings: NoneWord Count: ~ 4,600Spoilers: NoneSummary: Written for Heroes Fest for the prompt from rabidchild requesting, that she wanted to see Neal undercover when a call comes in and he's got to go off to a fire. 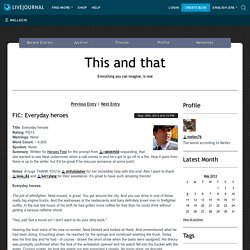 How it goes from there is up to the writer, but it'd be great if he rescues someone at some point. Not Alone Chapter 5: Not Alone, a white collar fanfic. I know I say the same thing every chapter, but it's true! 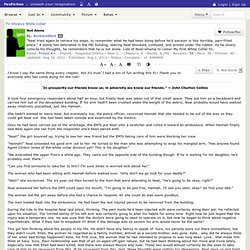 I had a ton of fun writing this fic! Thank you to everyone who has come along for the ride! "In prosperity our friends know us; in adversity we know our friends. " ~ John Churton Collins It took four emergency responders about half an hour, but finally Neal was taken out of that small space. They put him on a backboard and carried him out of the devastated building. She hadn't wanted to leave Neal, but eventually Joe, the police officer, convinced Hannah that she needed to be out of the way so they could get Neal out. Under Pressure Chapter 1, a white collar fanfic. Under Pressure Neal felt fire behind his eyes as he slowly came to. 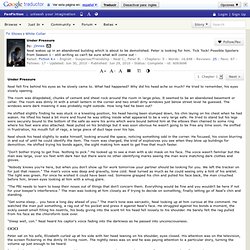 What had happened? Why did his head ache so much? He tried to remember, his eyes slowly opening. The room was dilapidated, chunks of cement and sheet rock around the room in large piles. He shifted slightly finding he was stuck in a kneeling position, his head having been slumped down, his chin laying on his chest when he had waken. Neal shook his head slightly to wake himself, looking around the space, noticing something odd in the corner. "Don't bother trying to get free. On Waking After a Bedside Vigil. Title: On Waking After a Beside VigilFandom: White CollarRating: PGCharacters: Neal Caffrey, Peter BurkeWord Count: 830Summary: Neal wakes up in a hospital, but everything's all right. On Waking After a Bedside Vigil Neal woke slowly, to the low beeping of a heart rate monitor and the back-and-forth hum of a ventilator. It sounded – wrong. Something was not right.

The sound was the first thing he noticed, and then the smell: cleanliness and sterility and a tiny little bit of head-and-shoulders. The last thing Neal noticed before he fully woke up was the soft brush of a well-calloused thumb rubbing softly across his the back of his right hand. He couldn’t open his eyes for another minute or to; things looked bleary when he finally did, and bright, and he had to blink several times to keep them from closing again. “Hey,” said someone to his right, a low, soothing voice that Neal would have known anywhere. Wildfire. Title: WildfireAuthor: angelita26Rating: PGCharacters and/or Pairing: Gen – Neal, Peter Spoilers: None.Word Count: ~1800Summary: Peter always knows where Neal is, and today’s the day that it saves his life. Notes: For kanarek13’s ComFest prompt. Also, the first piece of this fic was written for one of our first writing games prompt chats at wcwu, and it was just begging to be finished for this prompt.

Lifeline. Title: LifelineRating: PG, GenCharacters: Neal, PeterWarnings: Injuries, nothing graphic.Summary: Neal's trapped, and he's not handling it well, but Peter is there to help. Written for Anonymous at collarcorner. Acrophobia. Black Ice. Summary: Neal And Peter end up injured and alone in an accident! Neal! Whump! Know You're Never Alone. A very random two-shot this time. It may be so random, it doesn't even make sense. So feel free to let me know what you think. This was also an excuse for some shameless whumping. Happy reading. Shackled.