The new Google Arts & Culture, on exhibit now. Just as the world’s precious artworks and monuments need a touch-up to look their best, the home we’ve built to host the world’s cultural treasures online needs a lick of paint every now and then. 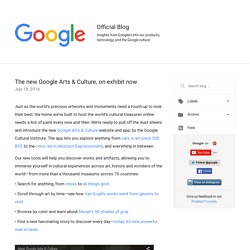 We’re ready to pull off the dust sheets and introduce the new Google Arts & Culture website and app, by the Google Cultural Institute. The app lets you explore anything from cats in art since 200 BCE to the color red in Abstract Expressionism, and everything in between. There’s much to learn about our shared cultural heritage. Download the app for iOS and Android to unlock a world of experiences, every day.Posted by Duncan Osborn, Product Manager, Google Cultural Institute Duncan Osborn Product Manager Google Cultural Institute. What does Google know about YOU? Google has released a new feature that will reveal how much information the search engine giant has collected about you. 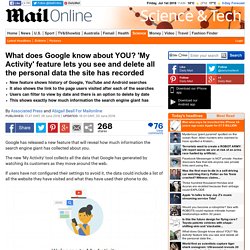 The new 'My Activity' tool collects all the data that Google has generated by watching its customers as they move around the web. If users have not configured their settings to avoid it, the data could include a list of all the website they have visited and what they have used their phone to do. Google’s Brain AI to use Tensortflow to paint, draw and make music. Can machines ever produce creative works to rival our own creations? 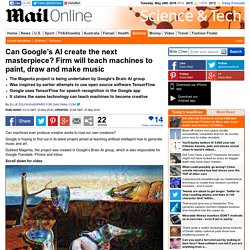 Google is hoping to find out in its latest project aimed at teaching artificial intelligent how to generate music and art. Dubbed Magenta, the project was created in Google's Brain AI group, which is also responsible for Google Translate, Photos and Inbox. Scroll down for video Google wants to use Tensortflow software to teach machines how to compose music and create works of art. DeepDream, Google's visual AI that could transform photos into psychedelic art (such as Salvador Dali’s Persistence of Memory, pictured), worked on a similar principle TensorFlow is an open source software library for machine learning. Google Street View maps Britain's national trails. The stewards of England and Wales’ national trails are bracing for more visitors as the stunning hiking paths are set to be featured on Google Street View. 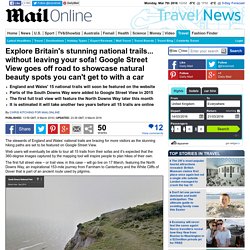 Web users will eventually be able to tour all 15 trails from their sofas and it’s expected that the 360-degree images captured by the mapping tool will inspire people to plan hikes of their own. The first full street view – or trail view, in this case – will go live on 17 March, featuring the North Downs Way, an inspirational 153-mile journey from Farnham to Canterbury and the White Cliffs of Dover that is part of an ancient route used by pilgrims. Some parts of the South Downs Way, including this spot near Beachy Head, are already on Google Maps Hikers planning a trip to South Downs Way can use the maps to get a better understanding of the terrain Called the Street View Trekker, the 50lb device contains 15 cameras, which snap photos every two seconds, and equipment that logs the location of each photo.

Google Chromecast. 'OK Google, Shazam this tune': Android adds more voice commands. Dubai becomes first Arab destination to use Google Street View. Tool gives 360-degree, panoramic and street-level views of the cityThe facility was initially used to map interior of Burj Khalifa skyscraperLaunched in 2007, Street View has expanded through the Western world It is used in 3,000 cities in 63 countries, as well as the Arctic and Antarctica By Simon Cable for MailOnline Published: 16:01 GMT, 9 December 2014 | Updated: 17:51 GMT, 9 December 2014 Dubai has become the latest city to be mapped by Google’s Street View facility. 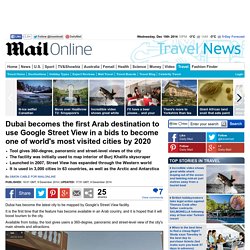 It is the first time that the feature has become available in an Arab country, and it is hoped that it will boost tourism to the city. Available from today, the tool gives users a 360-degree, panoramic and street-level view of the city's main streets and attractions. Google will launch 180 satellites to provide internet access for the planet, sources claim. Sources claim Google will spend more than $1bn (£600m) on technologySatellites will orbit the Earth at lower altitudes than traditional satellitesGroup also acquired a drone company to provide internet connectivityFacebook, meanwhile, is developing its own solar-powered drones, satellites and lasers to deliver web access to underdeveloped countriesA separate Google project, dubbed Project Loon, is designing high-altitude balloons to provide broadband service to remote regions of the world By Ellie Zolfagharifard Published: 09:38 GMT, 2 June 2014 | Updated: 13:37 GMT, 2 June 2014 The world wide web may seem like a global community, but two-thirds of the planet still remain without access. 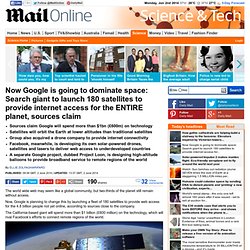 Google Hints It May Toss Long URLs From Chrome. Google Chrome may eventually hide long URLs from the address bar. 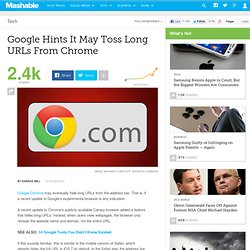 That is, if a recent update to Google's experimental browser is any indication. A recent update to Chrome's publicly available Canary browser added a feature that hides long URLs. Instead, when users view webpages, the browser only reveals the website name and domain, not the entire URL. If this sounds familiar, this is similar to the mobile version of Safari, which already hides the full URL in iOS 7 by default. Dr Who's Tardis on Google Street View. 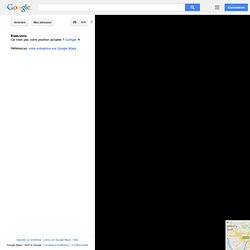 Réorganisez vos applications en faisant glisser les icônes. Doctor Who 50th Anniversary: the story behind the Google doodle. This summer, engineers at Google London added the Tardis to Google Street View, but that wasn't enough for Doctor Who fans, 4,000 of whom have signed a petition asking Google to do a doodle for the show's 50th Anniversary. 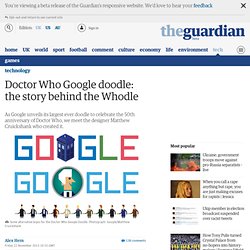 Today, those wishes were granted: not only did Google make the doodle, but the game gracing every Google homepage in the world today is one of the biggest the company has ever produced. But despite appearances, the "Whodle" – as it's known internally – is the work of just five people, led by Matthew Cruickshank, a Brit who has been working at the company as a full-time doodler for just over a year. Google Middle-earth: Interactive 3D map of J.R.R. Tolkien's imagined kingdom launches in run-up to Hobbit film release. The interactive map allows people to dodge trolls in Trollshaws and water plants in Rivendell in mini gamesIt was created by Google to showcase the abilities of its Google Chrome browser and to promote the new Hobbit filmUsers can currently enter three locations from The Hobbit novel: Trollshaws, Rivendell, and Dol Guldur - but more will be added By Sarah Griffiths Published: 16:29 GMT, 21 November 2013 | Updated: 21:00 GMT, 21 November 2013 Fans of J.R.R. 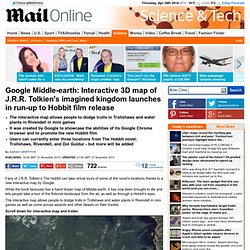 Editors' roundtable: Weighing in on Android 4.3, Chromecast and the new Nexus 7. This morning during a (relatively) intimate breakfast in San Francisco's Dogpatch neighborhood, Google unleashed what we'll call an Android fan trifecta. We got Android 4.3, an updated Nexus 7, and the Chromecast HDMI dongle, which takes the place of the aborted Nexus Q living-room media device. Not a bad summer haul at all. Android 4.3 is available now on Google's Nexus devices, and we should see it hit others relatively quickly. Venice finally mapped by Street View: Google staff ditched the famous car and strapped cameras to their backs in order to capture the city's canals. Google Street View has captured Venice - by doing it on footCompany strapped 33lbs cameras to employees who walked the cityImages of Venice will be available online in two weeks By Sara Malm Published: 21:34 GMT, 15 July 2013 | Updated: 07:09 GMT, 17 July 2013.

Innovation, Craftsmanship & Design. Mystery words decoded by captcha go towards improving OCR When you solve a captcha, one of those jumbles of letters web forms use to prove you’re human and not an automated spambot, you’re actually helping Google digitise books and old newspapers. The two words in the images produced by the reCAPTCHA system come from texts scanned by Google’s optical character recognition (OCR) software. One it already recognises, the other it does not. The known answer is a control word.

Street View goes wild: Google's mapping service goes off-road using backpacks to extend the service to the Grand Canyon. Project marks the first official use of Google's new Trekker camerasBackpack-mounted, 40lb devices take 5MP photos every 2.5 seconds By Damien Gayle Published: 12:26 GMT, 24 October 2012 | Updated: 22:43 GMT, 24 October 2012 Exploring the Grand Canyon usually involves a map, walking boots – and a lot of stamina. But, thanks to Google, even the laziest among us could soon become the most intrepid of travellers – and all without leaving the comfort of our sofa. Google and Samsung unveil £229 laptop 'for everyone' Launch comes amid Google share price crisisLaptop revealed ahead of Apple's expecting unveiling of a low cost iPad Mini next weekMachine has no hard drive, instead storing information on Google's servers By Mark Prigg Published: 11:25 GMT, 19 October 2012 | Updated: 14:35 GMT, 19 October 2012 Google hopes a new low cost laptop could tempt buyers away from new tablets from Apple and Microsoft.

The lightweight computer will sell for £229 ($249) and is being made with Samsung. It was revealed just days before Apple is expected to unveil a low cost version of its iPad tablet, and Microsoft and Amazon begin selling their tablet computers. See the computer in action below. Google Cultural Institute goes live with 42 new interactive exhibitions showcasing major events and figures of the past century. Google goes underwater with virtual tours of the world's great coral reefs.

Indexing the world: Google receives software that means it can intelligently identify any object on the planet. Geek-chic techno-glasses outclass Google Goggles on looks - and record EVERYTHING they see. Prototype glasses created on 3D printerGlasses record video to share via Facebook, YouTube and TwitterAlso has 'magic' button which turns them into sunglasses. Google Maps is going 3-D: Incredible new feature will let users zoom around like they're in 'their own personal helicopter'