The greatest train journey on Earth. 1. 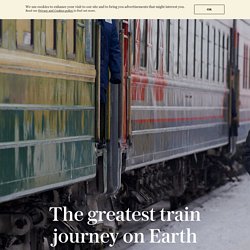 Do it yourself It’s entirely possible to organise a trip on the Trans-Siberian Express under your own steam by turning up at Moscow’s Yaroslavsky station, joining the queue and buying a ticket from the kiosk. Sounds straightforward, but it’s not: queues are long, availability is often limited and the ticket vendors rarely speak English. If you do choose this option, which is the cheapest way of travelling, get a Russian-speaking friend to write on a piece of paper exactly what ticket you want to buy, detailing the time, date, destination and class. Alternatively, use a specialist agent such as Real Russia (020 7100 7370; realrussia.co.uk) to make the reservations for you. 2. Many tourists prefer the simplicity of booking an all-inclusive package from travel companies as Audley Travel (01993 838200; audleytravel.com), Railbookers (020 3327 1562; railbookers.com) or Regent Holidays (020 3553 3240; regent-holidays.co.uk). 3.

The Russia Left Behind. A few times every day, the high-speed train between St. 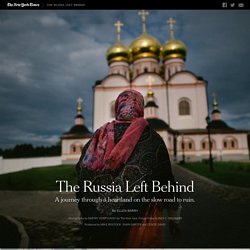 Petersburg and Moscow barrels through the threadbare town of Lyuban. When word gets out that the head of Russia’s state railway company — a close friend of President Vladimir V. Putin — is aboard, the station’s employees line up on the platform standing at attention, saluting Russia’s modernization for the seconds it takes the train to fly through. Whoosh. But Vladimir G. Video | 0:39 Vladimir G. At the edges of Russia’s two great cities, another Russia begins. This will not be apparent at next year’s Winter Olympics in Sochi, nor is it visible from the German-engineered high-speed train.

As the state’s hand recedes from the hinterlands, people are struggling with choices that belong to past centuries: to heat their homes with a wood stove, which must be fed by hand every three hours, or burn diesel fuel, which costs half a month’s salary? Clad in rubber slippers, his forearms sprinkled with tattoos, Mr. Kizhi Pogost: The biggest building in the world that's made entirely from wood. Russian Orthodox Church buildings are more than 150 years oldMagnificent structures, in western isle of Kizhi, stand at 123 feet tall By Helen Collis Published: 15:05 GMT, 11 July 2013 | Updated: 06:27 GMT, 12 July 2013 It has withstood the Earth's elements for more than 150 years and yet this spectacular church remains the tallest wooden structure in the world. 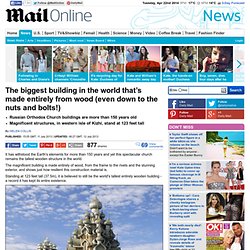 The magnificent building is made entirely of wood, from the frame to the rivets and the stunning exterior, and shows just how resilient this construction material is. Standing at 123 feet tall (37.5m), it is believed to still be the world's tallest entirely wooden building - a record it has kept its entire existence. Lake Baikal in Siberia: 50ft high ice blocks that shimmer like precious stones on the surface of giant frozen lakes. Named ice hummocks, the giant blocks are formed by movement of ice floesThese hummocks are on Lake Baikal in Siberia, which holds one fifth of the world's fresh water By Daily Mail Reporter Published: 14:33 GMT, 16 April 2013 | Updated: 14:47 GMT, 16 April 2013 This vast white landscape is covered in a blanket of stunning ice sculptures which are creations of nature. 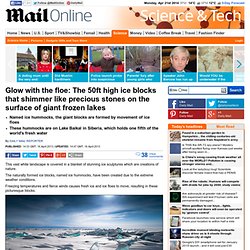 The naturally formed ice blocks, named ice hummocks, have been created due to the extreme weather conditions. Freezing temperatures and fierce winds causes fresh ice and ice floes to move, resulting in these picturesque blocks. The ice hummocks, created through a combination of extreme winds and cold temperatures, can reach a height of 15m (50ft) Snow glow area: The huge blocks of ice appear to glow bright blue as they catch the sun The ice hummocks can reach a height of 15m (50ft) and photographer Alexey Trofimov was awed by the amazing sights surrounding him.

The lake itself is a natural wonder. Oymyakon, the coldest village on earth: Weather takes turn for the worse in -71C Russian hamlet. Russian village of Oymyakon has lowest recorded temperature for any permanently inhabited locationNothing grows so locals live off diet of reindeer meat and horse meat but never suffer malnourishment Locals keep their cars running all day for fear of them not starting again if turned offDigging graves for a funeral can take up to three days as ground has to be thawed with hot coals By Sean O'hare and Alex Ward Published: 19:26 GMT, 18 February 2013 | Updated: 07:51 GMT, 19 February 2013 As we whinge about the wintry weather here in Britain, spare a thought for those living in a Russian hamlet where temperatures can plummet to -71C, so cold even planes cannot land there in winter. 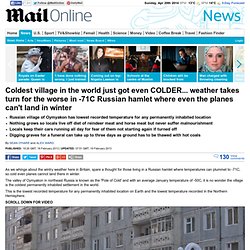 The valley of Oymyakon in northeast Russia is known as the 'Pole of Cold' and with an average January temperature of -50C, it is no wonder the village is the coldest permanently inhabited settlement in the world. Ironically, Oymyakon actually means 'non-freezing water' due to a nearby hot spring.