Pinterest is a sleeping giant - don't underestimate it. 23 Expert Pinterest Tips that Will Triple Your Referral Traffic. When it comes to long term social media referral traffic, Pinterest is the king. 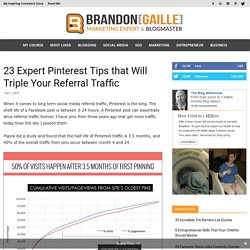 The shelf life of a Facebook post is between 3-24 hours. A Pinterest post can essentially drive referral traffic forever. I have pins from three years ago that get more traffic today than the day I posted them. Piqora did a study and found that the half-life of Pinterest traffic is 3.5 months, and 40% of the overall traffic from pins occur between month 4 and 24. Over the last two years, I have studied and applied the techniques of the most successful Pinterest accounts. Pinterest: 33 Tools To Help You Maximize Results. Pinterest Consultant share 33 tools to help you maximize your Pinterest results! 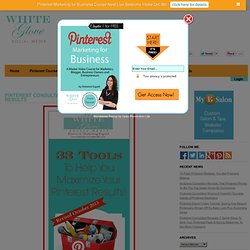 If you’re not leveraging Pinterest for your business you are definitely missing out on a real gold mine. Pinterest is no longer just about pretty pictures or for ecommerce businesses. Did you know that 5 million articles are being pinned on Pinterest on a daily basis? According to Shareaholic Pinterest now drives more traffic to publishers than Twitter, LinkedIn, Reddit and Google+ combined! This is amazing for bloggers, writers, and publishers. 7 deadly marketing mistakes on Pinterest. Pinterest: 5 Tactics for This Visual Social Media Mecca. Heidi Cohen | November 26, 2012 | 12 Comments inShare88 Set marketing objectives for your Pinterest activity, know your audience, show your 360-degree brand, create a content marketing strategy, and measure results. 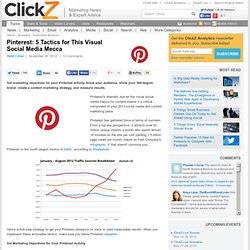 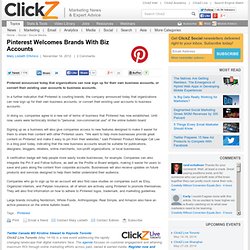 In a further indication that Pinterest is courting brands, the company announced today that organizations can now sign up for their own business accounts, or convert their existing user accounts to business accounts. In doing so, companies agree to a new set of terms of business that Pinterest has now established. Until now, users were technically limited to "personal, non-commercial use" of the online bulletin board. Signing up as a business will also give companies access to new features designed to make it easier for them to share their content with other Pinterest users. A verification badge will help people more easily locate businesses, for example. 8 Ways to Expand Your Pinterest Presence. Tony Zito | May 10, 2013 | 1 Comment inShare23 Expand your Pinterest presence by building a community, collaborating, creating specialized boards, and more. 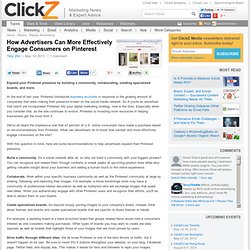 At the end of last year, Pinterest introduced business accounts in response to the growing amount of companies that were making their presence known on the social media network. New Pinterest Research Shows Which Images Get the Most Engagement. New research emerging from Curalate describes what types of images get the most pins, repins, and likes on Pinterest. 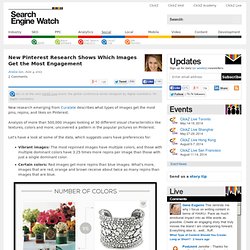 Analysis of more than 500,000 images looking at 30 different visual characteristics like textures, colors and more, uncovered a pattern in the popular pictures on Pinterest. Let's have a look at some of the data, which suggests users have preferences for: Vibrant images: The most repinned images have multiple colors, and those with multiple dominant colors have 3.25 times more repins per image than those with just a single dominant color.Certain colors: Red images get more repins than blue images.

Pinterest Analytics: The Ultimate Guide to Tracking Your Site’s Performance on Pinterest. According to Nielsen's State of the Media: Social Media Report 2012, Pinterest has over 27 million active users as of July 2012, and has shown explosive growth in the last three years, as seen from the graph below: Image Credit: Shareaholic Even though Pinterest can't yet compete with Facebook, it is growing exponentially and in three short years is now one of the top six largest social media networks, alongside Twitter, LinkedIn, Google+, and YouTube. 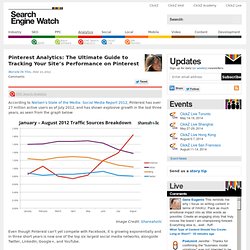 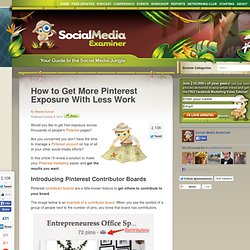 Are you concerned you don’t have the time to manage a Pinterest account on top of all of your other social media efforts? In this article I’ll reveal a solution to make your Pinterest marketing easier and get the results you want. 64 Pinterest Marketing Tips and Tactics - Infographic. I walked into an electronics store the other day and happened to pass the television department.

The 70 inch televisions with high definition flat screens were displaying videos so compelling that for a minute or two I just stood there watching images so sharp and mesmerizing that I just stopped and watched. The vibrant colors and high contrast were almost hypnotic. It was only ten years ago and a flat screen TV half that size was $20,000. Now everyone has at least a 42 inch plasma or LCD screen and that is in the smallest room in the house! Six brands making good use of Pinterest, and two that aren't. Pinterest has come from nowhere to become one of the biggest social networks in the US, though its popularity in the UK has so far failed to live up to the hype. 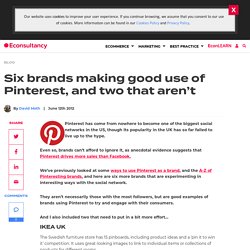 Even so, brands can’t afford to ignore it, as anecdotal evidence suggests that Pinterest drives more sales than Facebook. We’ve previously looked at some ways to use Pinterest as a brand, and the A-Z of Pinteresting brands, and here are six more brands that are experimenting in interesting ways with the social network. They aren’t necessarily those with the most followers, but are good examples of brands using Pinterest to try and engage with their consumers.

And I also included two that need to put in a bit more effort… The Swedish furniture store has 15 pinboards, including product ideas and a ‘pin it to win it’ competition. Some of the images also include price information so it essentially acts as an extension of its catalogue. Diesel The clothing brand’s 16 pinboards have clocked up 1,362 followers. House of Fraser L’Oreal UK Zara. Meet Your Pinterest Customer - Alexandra Samuel. How Pinterest Boosted Jetsetter's Traffic by 150% There's nothing quite like Pinterest when it comes to eye candy. And few sites, if any, have more stunning photography than Jetsetter. So it's not surprising that Jetsetter's most recent initiative was a "pin it to win it" Pinterest contest. It's also not surprising that the contest performed very well. Pinterest is the darling of the interwebs, with staggering referral traffic and a rapidly growing user base, and it's natural that stunning travel photos spread like wildfire on the social media platform.

“Pinterest is the perfect platform for Jetsetter’s photo-driven [content]," says Jonathan Goldmann, social media manager at Jetsetter. How It Worked Few jobs are more enviable than a travel curator — you stay in the best hotels, test every amenity, eat the finest food and see the world. Using content on Jetsetter and around the web, Jetsetter members pinned photos in four categories: escape, adventure, style and cosmopolitan. Engagement Metrics Escape: @EarmarkSocial (276 photos!)

Moving Customers from Pinning to Purchase - Alexandra Samuel. Pinterest surged into the spotlight earlier this year when it was revealed that it drives more web traffic than YouTube, Google+ and LinkedIn combined. What’s so compelling about a website that lets you make virtual bulletin boards of “pinned” images, observers wondered, and does this service now belong in the pantheon of must-use social tools like Facebook and Twitter? Perhaps most important, marketers are asking, is this something that will drive revenue?

Using Pinterest Yet? 13 Tips for Gaining Business Exposure for Your Clients. As public relations practitioners, we need to be ahead of the curve and make sure that our clients appear on appropriate social networking sites in order to gain brand awareness and exposure. It's simple, really. So when I saw dozens of requests from clients, business associates and friends asking me to join the site, I was intrigued. Pinterest is a new social networking site that enables you to have your own online bulletin board where you can “pin” stuff you like or want to keep. Why Brand Managers Need to Take an Interest in Pinterest. Two days ago I told you Why Women Are the Most Powerful Brand Ambassadors In the World. Well consider this a follow up... you'll see what I mean.

The person who makes the majority of household purchasing decisions has developed an affinity for the latest and greatest social media platform, Pinterest. How Pinterest Can Get Your Brand Attention [INFOGRAPHIC] If your brand isn't on Pinterest, you could be missing out on a growing stream of potential customers. While shaping your brand's image on Pinterest, remember to take into account the specifics of the site's userbase. A recent study showed that home, arts and crafts, style/fashion and food are the most popular categories on Pinterest. The food category is the fastest growing segment of Pinterest.

SEE ALSO: Pinterest’s First Investor Explains the Secret to the Startup’s Success Even if your brand doesn't directly specialize in these topics, there may be a way to include them in your brand's boards to gain maximum exposure. Take a look at this infographic from web optimization company Maxymiser, and then let us know in the comments if you're altering your plans to take advantage of the explosive growth of Pinterest. Pinterest Marketing and Information Forums.