Daily aspirin 'reduces cancer risk', study finds. Wednesday August 6 2014 Previous studies have linked aspirin with reduced cancer risk Taking aspirin every day could cut your risk of developing cancer, report BBC News and The Daily Telegraph among other news outlets, after the publication of a large-scale review of the evidence. 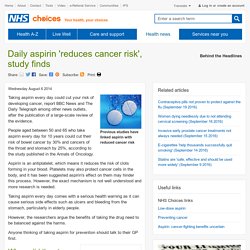 People aged between 50 and 65 who take aspirin every day for 10 years could cut their risk of bowel cancer by 30% and cancers of the throat and stomach by 25%, according to the study published in the Annals of Oncology. Aspirin is an antiplatelet, which means it reduces the risk of clots forming in your blood. Platelets may also protect cancer cells in the body, and it has been suggested aspirin's effect on them may hinder this process. Taking aspirin every day comes with a serious health warning as it can cause serious side effects such as ulcers and bleeding from the stomach, particularly in elderly people. Zanidip 10mg tablets - High blood pressure - eMC Medicines Guides. Atenolol 100mg tablets - High blood pressure - eMC Medicines Guides. You are here: Home > Atenolol Last Updated 10 Jan 2008 You are viewing: Atenolol (At-en-ol-ol) is a medicine which is used in angina, heart attacks, heart rhythm disorders and hypertension. 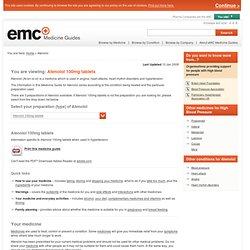 The information in this Medicine Guide for Atenolol varies according to the condition being treated and the particular preparation used. There are 3 preparations of Atenolol available. Select your preparation (type) of Atenolol Atenolol 100mg tablets Information specific to Atenolol 100mg tablets when used in hypertension Print this medicine guide Can't read the PDF? Your medicine Medicines are used to treat, control or prevent a condition. Atenolol has been prescribed for your current medical problems and should not be used for other medical problems. The pharmacy label on your medicine tells you how much medicine you should take. Atenolol blocks the effects of certain chemicals in the body. If you feel that the medicine is making you unwell or you do not think it is working, then talk to your prescriber. Ramipril 5mg capsules - High blood pressure - eMC Medicines Guides. High blood pressure - eMC Medicines Guides. 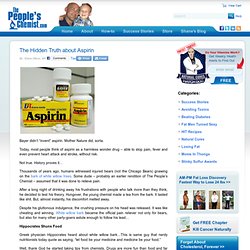 Mother Nature did, sorta. Today, most people think of aspirin as a harmless wonder drug – able to stop pain, fever and even prevent heart attack and stroke, without risk. Not true. History proves it… Thousands of years ago, humans witnessed injured bears (not the Chicago Bears) gnawing on the bark of white willow trees. After a long night of drinking away his frustrations with people who talk more than they think, he decided to test his theory. Despite his gluttonous indulgence, the crushing pressure on his head was released. Hippocrates Shuns Food Greek physician Hippocrates heard about white willow bark…This is same guy that nerdy nutritionists today quote as saying, “let food be your medicine and medicine be your food.”

Well, thank God he started taking tips from chemists. As time past, Big Pharma got excited about the pain killer. To their distress, the industry couldn’t market the natural ingredient as their own. Bayer Steals From Mother Nature Judith P. 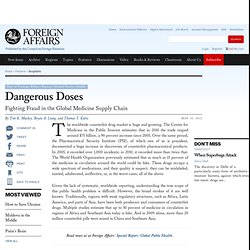 The Center for Medicine in the Public Interest estimates that in 2010 the trade reaped around $75 billion, a 90 percent increase since 2005. Over the same period, the Pharmaceutical Security Institute (PSI), of which one of us is president, documented a huge increase in discoveries of counterfeit pharmaceutical products. In 2005, it recorded over 1,000 incidents; in 2010, it recorded more than twice that. The World Health Organization previously estimated that as much as 15 percent of the medicine in circulation around the world could be fake. These drugs occupy a wide spectrum of medications, and their quality is suspect; they can be mislabeled, tainted, adulterated, ineffective, or, in the worst cases, all of the above.

Given the lack of systematic, worldwide reporting, understanding the true scope of this public health problem is difficult. Read more at at Foreign Affairs' Special Report: Global Public Health. Register.