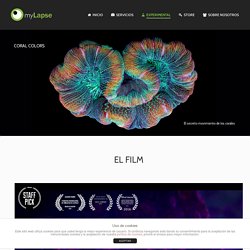 Por fin tenía un número de clips suficiente y una música hecha a medida. Deep Sea Explorers Stumble Upon A Creature They Can Hardly Believe Is Real. While there are no shortage of wacky ideas in science fiction about what creatures from other planets might look like, many weird and remarkable creatures can actually be found right here on Earth. 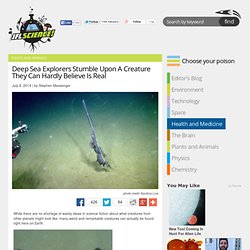 Recently, a team from the Nautilus Live expedition piloting a remotely operated vehicle (ROV) happened upon one of the most fascinating-looking lifeforms in the world: a rare, purple siphonophore roving through the ocean’s depths. Even the experienced deep sea explorers, well-acquainted with the marine animals, had a hard time accepting that what they were seeing was really real. “Wow. Okay, that’s awesome,” says one ROV operator. “I can’t believe that’s a living thing.” Amazingly, although this appears to be a single jellyfish-like animal, it is in fact a roving colony made up of thousands of individual organisms, called zooids, each contributing to the whole. Deep Sea News writer R.R. Natural Wonders: Astonishing Pictures of Polychaetes (Scale Worms)

Astonishing Pictures of Polychaetes (Scale Worms) They look like monsters from another planet. 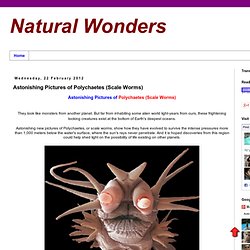 But far from inhabiting some alien world light-years from ours, these frightening looking creatures exist at the bottom of Earth's deepest oceans. Astonishing new pictures of Polychaetes, or scale worms, show how they have evolved to survive the intense pressures more than 1,000 meters below the water's surface, where the sun's rays never penetrate. And it is hoped discoveries from this region could help shed light on the possibility of life existing on other planets. Evolution: The scale worms have evolved to withstand the harshest environments found anywhere on our planet. Where's The Octopus? Reblololo: Zebrafish larvae, first prize Image: New 'Pancake' Stingrays Discovered in the Amazon. Two new species of freshwater stingray have been discovered in the Amazon rain forest. 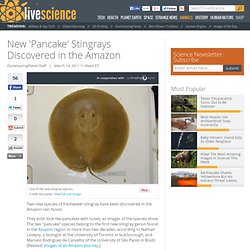 They both look like pancakes with noses, as images of the species show. The two "pancake" species belong to the first new stingray genus found in the Amazon region in more than two decades, according to Nathan Lovejoy, a biologist at the University of Toronto in Scarborough, and Marcelo Rodrigues de Carvalho of the University of São Paolo in Brazil. [Related: Images of an Amazon Journey.] "It took a considerable amount of time to collect enough specimens to describe the species," Lovejoy said. "They are uncommon fishes and therefore difficult to obtain. " Heliotrygon with two smaller Potamotrygon specimens.Credit: David Webber/www.belowwater.com. The research team had to compete with international fish exporters for the bigger examples of the fishes. 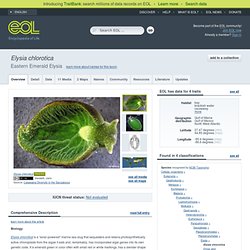 It is emerald green in color often with small red or white markings, has a slender shape typical of members of its genus, and parapodia (lateral "wings") that fold over its body in life. This sea slug is unique among animals to possess photosynthesis-specific genes and is an extraordinary example of symbiosis between an alga and mollusc as well as a genetic chimera of these two organisms. Les Chroniques du Plancton. Listening to the Deep Ocean Environment. Hydrothermal Vents. Des chercheurs découvrent un "monde perdu" sous l’Antarctique. This is What Happens When a Squid Listens to Cypress Hill. This just completely blew my mind. 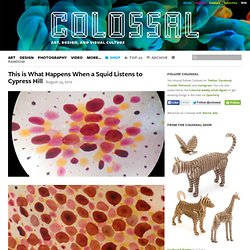 First a minor detail: squids do not possess ears. However, the same impulses created when audio is converted to an electrical signal, like what happens inside a microphone, can actually be gently applied to tissue, in this case the dorsal side of a squid fin. Joe Hanson over on It’s OK to be Smart explains this better than I ever will. The video above comes from the team over at Backyard Brains who did some experiments at the Marine Biological Laboratory in Woods Hole, Massachusetts where a squid was hooked up to a special iPod playing Cypress Hill’s 1993 hit Insane in the Brain.

Bizarre Hybrid Deep-Sea Creatures Discovered. - During a dive in the manned submersible Alvin off the coast of Costa Rica, researchers discovered a set of strange new animals. - Two extreme environments exist there side-by-side and animals have adapted to both. 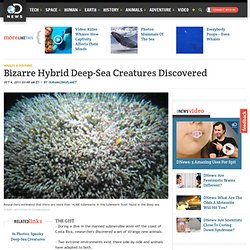 Scientists have discovered a strange and rare hybrid site in the deep sea where two extreme seafloor environments exist side-by-side, and are home to a parade of weird hybrid creatures seemingly adapted to the hardships posed by both intense environments. Marine Monster Mystery on S.C. Beach. A bizarre creature that washed ashore last week in Folly Beach, S.C., sparked speculation in the area and on the Internet that a dead sea monster might have been discovered. 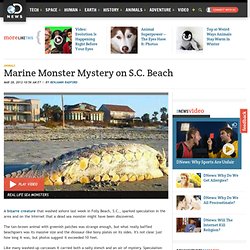 The tan-brown animal with greenish patches was strange enough, but what really baffled beachgoers was its massive size and the dinosaur-like bony plates on its sides. It's not clear just how long it was, but photos suggest it exceeded 10 feet. Like many washed-up carcasses it carried both a salty stench and an air of mystery. Speculation ran rampant, with commenters suggesting that the creature was everything from a dinosaurian sea monster to a toxin-spawned mutation to a chupacabra. Voici l'éponge...