Introduction to the Holocaust. The Holocaust was the systematic, bureaucratic, state-sponsored persecution and murder of six million Jews by the Nazi regime and its collaborators. 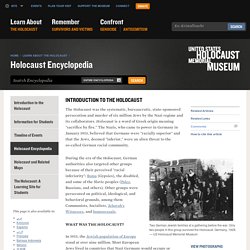 Holocaust is a word of Greek origin meaning "sacrifice by fire. " The Nazis, who came to power in Germany in January 1933, believed that Germans were "racially superior" and that the Jews, deemed "inferior," were an alien threat to the so-called German racial community. During the era of the Holocaust, German authorities also targeted other groups because of their perceived "racial inferiority": Roma (Gypsies), the disabled, and some of the Slavic peoples (Poles, Russians, and others). Other groups were persecuted on political, ideological, and behavioral grounds, among them Communists, Socialists, Jehovah's Witnesses, and homosexuals. Markus Zusak. 1 Australian author Markus Zusak began his writing career at an early age, but his first book was not published until 1999. 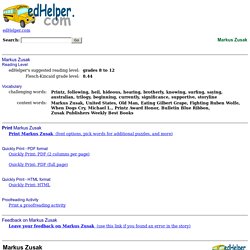 He first achieved success as a writer in Australia, but as his books began publishing in the United States and then later in Europe, his career blossomed. Zusak has recently been called a "literary phenomenon. " 2 Born in 1975 in Australia, Zusak is the youngest of four children born to German and Austrian parents who were immigrants to Australia. His parents experienced hardships and struggled to live decent lives. Zusak grew up wanting to be a house painter just like his father. Unfortunately, when he went to work with his father, he often messed up and had a gift for knocking over paint and painting himself into corners. 3 Zusak realized what he wanted to do with his life during his teen years. Paragraphs 4 to 9:For the complete story with questions: click here for printable Weekly Reading Books More Lessons. 309119. English%2010%20Book%20thief%20Packet%202012 13. The_Book_Thief-HERC_Handout. The book thief crawford.

BookThiefDiscussionQuestions. Chapter 4 - The Book Thief by Zusak, Markus read free online. I think her mother knew this quite well. 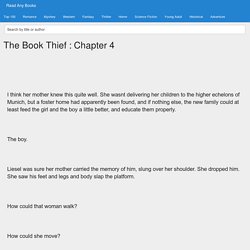 She wasnt delivering her children to the higher echelons of Munich, but a foster home had apparently been found, and if nothing else, the new family could at least feed the girl and the boy a little better, and educate them properly. The boy. Liesel was sure her mother carried the memory of him, slung over her shoulder. She dropped him. She saw his feet and legs and body slap the platform. How could that woman walk? How could she move? OB TeachersNotes. Grade9GT TheBookThiefMarkusZusak. The Book Thief. Based on its title, you might think that The Book Thief is a spy thriller or a Holmes-style detective story. 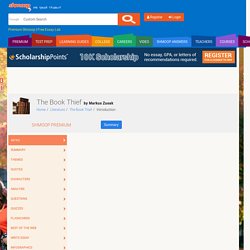 But really, this is the emotional story of a young girl living in Germany during the Holocaust. Yep, a ten-year-old girl is the title's thief. And the books she's stealing aren't top-secret documents— they're just... books. If you got caught stealing books today, you'd get in serious trouble (or at least accumulate a staggering library fine). But we love Liesel Meminger, and we root for her and her thieving ways throughout her tale. THE BOOK THIEF. The Book Thief is one of the most moving movies I have ever seen, one of those rare ones you treasure forever especially because it is about the power of words to make worlds. 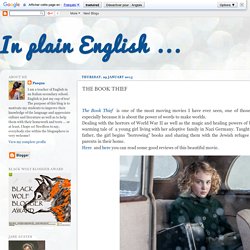 Dealing with the horrors of World War II as well as the magic and healing powers of books, it is the chilling yet heart-warming tale of a young girl living with her adoptive family in Nazi Germany. Taught to read by her benevolent foster father, the girl begins "borrowing" books and sharing them with the Jewish refugee being sheltered by her adoptive parents in their home. Here and here you can read some good reviews of this beautiful movie.

Here you can read this unforgettable novel online. The Book Thief by Jazzy Labelle on Prezi. The Book Thief Study Guide. Markus Zusak began his career as a successful writer of young adult fiction, but for his fifth novel, Zusak set out to relate the experiences of his parents growing up during World War II for an adult audience. 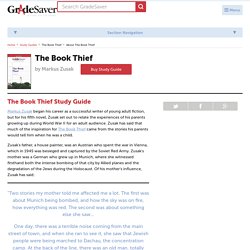 Zusak has said that much of the inspiration for The Book Thief came from the stories his parents would tell him when he was a child. Zusak's father, a house painter, was an Austrian who spent the war in Vienna, which in 1945 was besieged and captured by the Soviet Red Army. Zusak's mother was a German who grew up in Munich, where she witnessed firsthand both the intense bombing of that city by Allied planes and the degradation of the Jews during the Holocaust. Of his mother's influence, Zusak has said: "Two stories my mother told me affected me a lot. 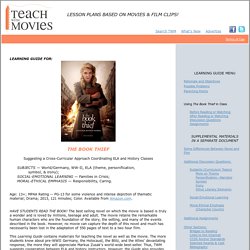 Identify a theme from the story that taught you something or confirmed or expanded your understanding of something that you already knew. Suggested Response: Students will formulate the themes in their own way. The substance is what is important. A. B. C. D. E. Teaching Resources for The Book Thief by Markus Zusak. November 7, 2013 by lindaslinks The movie version of The Book Thief by Markus Zusak will be released in theaters beginning November 8 depending upon where you live. 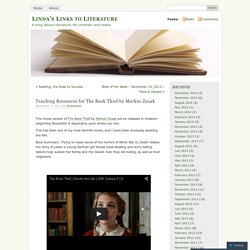 This has been one of my most favorite books, and I have been anxiously awaiting the film. Book Summary: Trying to make sense of the horrors of World War II, Death relates the story of Liesel–a young German girl whose book-stealing and story-telling talents help sustain her family and the Jewish man they are hiding, as well as their neighbors. Teaching Resources Official Film Website Activity Worksheets St. Like this: The Book Thief - Historical Fiction - Questions for Tests and Worksheets. "The Book Thief," pages 1-81. Amiable diffusing warmth and friendlinessI can be amiable. 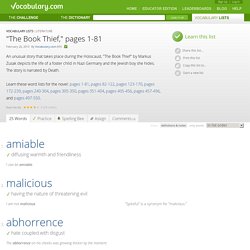 Malicious having the nature of threatening evilI am not malicious. "Spiteful" is a synonym for "malicious. " abhorrence hate coupled with disgustThe abhorrence on his cheeks was growing thicker by the moment. Traipse walk or tramp about“Come on,” he said, traipsing over the snow. Shroud cover as if with a burial garmentHe remained shrouded in his uniform as the graying light arm- wrestled the sky. Pmwiki.php?n=Novels. To view the details of an annotation, use the '+' sign to expand an entry. 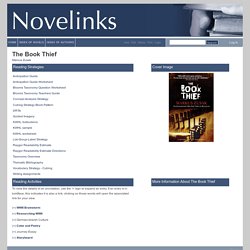 If an entry is in boldface, this indicates it is also a link; clicking on those words will open the associated link for your view. Before reading the novel it may be a good idea to get your students to discuss or brainstorm their prior knowledge of WWII and the Nazi Party, as well as have a general discussion on the effects of war on innocent people, the economy, housing, employment, etc. Have students gather into groups and write down everything they already know about WWII. Then have them share their findings with the class.

Give a brief history of WWII. Burke, Veronica. Before reading, have your students research different topics they will encounter in the novel.