Medieval life was a laborious one. Most people farmed to feed themselves and pay their taxes, but there were other jobs to do too, especially if you lived in a town or city.

One job discussed in the book is that of a shoemaker, and the first resource here discusses that occupation and shows you an example of a Medieval shoe from the British Museum. The other will tell you more about medieval life, work, and some famous medieval Scots mentioned in the book. Shoes and Shoemakers · Medieval London. In medieval London, shoes were an integral part of daily life. 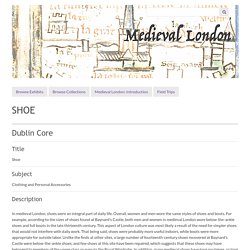 Overall, women and men wore the same styles of shoes and boots. For example, according to the sizes of shoes found at Baynard’s Castle, both men and women in medieval London wore below-the-ankle shoes and full boots in the late thirteenth century. This aspect of London culture was most likely a result of the need for simpler shoes that would not interfere with daily work. That being said, shoes were probably more useful indoors, while boots were more appropriate for outside labor. Medieval Jobs. There is a whole lot of interest in what people did in the Middle Ages. 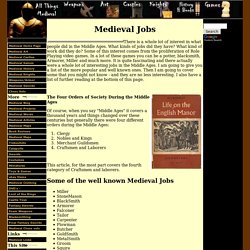 What kinds of jobs did they have? What kind of work did they do? Some of this interest comes from the proliferation of Role Playing video games. Late Medieval Daily Life. The trade and craft ‘masteries’ which controlled the commerce of towns were not the only guilds in late medieval England. 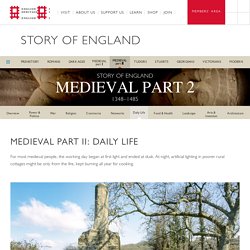 Others ranged from groups of village ploughmen or ‘maidens’ who maintained an altar to a patron saint in the parish church, to exclusive high-status associations – like the Coventry Corpus Christi guild – with aristocrats and even monarchs among their members. Many guilds met in purpose-built guildhalls, like Blakeney Guildhall, Norfolk, or York’s much grander Merchant Adventurers’ Hall. Medieval Life - The Farming Year - History on the Net. Life was hard for the peasants who worked on the farms. 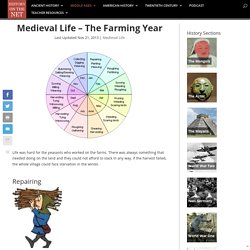 There was always something that needed doing on the land and they could not afford to slack in any way. If the harvest failed, the whole village could face starvation in the winter. Repairing Peasants had to make their own houses during the Medieval Period. They used mud and sticks for the floor and walls and the roof was thatched with straw. Scotland's Bravehearts - Robert the Bruce and William Wallace. There are two men whose names were a clarion call to all Scots. 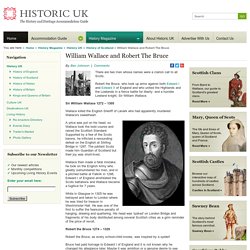 Robert the Bruce, who took up arms against both Edward I and Edward II of England and who united the Highlands and the Lowlands in a fierce battle for liberty: and a humble Lowland knight, Sir William Wallace. Sir William Wallace 1272 – 1305 Wallace killed the English Sheriff of Lanark who had apparently murdered Wallace's sweetheart. A price was put on his head, so Wallace took the bold course and raised the Scottish Standard. Supported by a few of the Scots barons, he inflicted a resounding defeat on the English at Stirling Bridge in 1297.