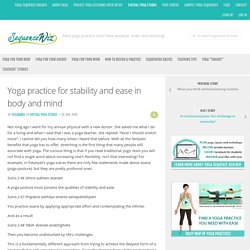 She asked me what I do for a living and when I said that I was a yoga teacher, she replied: “Nice! I should stretch more”. I cannot tell you how many times I heard that before. With all the fantastic benefits that yoga has to offer, stretching is the first thing that many people still associate with yoga. The curious thing is that if you read traditional yogic texts you will not find a single word about increasing one’s flexibility. Sutra 2.46 Sthira sukham asanam A yoga posture must possess the qualities of stability and ease. Sutra 2.47 Prayatna saithilya ananta samapattibhyam You practice asana by applying appropriate effort and contemplating the Infinite. And as a result Sutra 2.48 Tatah dvanda anabhighata Then you become undisturbed by life’s challenges. This is a fundamentally different approach from trying to achieve the deepest form of a posture that is still very popular nowadays. 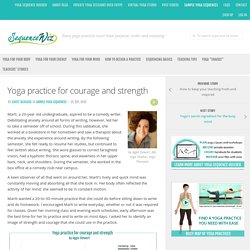 Debilitating anxiety around all forms of writing, however, led her to take a semester off of school. During this sabbatical, she worked at a bookstore in her hometown and saw a therapist about the anxiety she experience around writing. By the following semester, she felt ready to resume her studies, but continued to feel skittish about writing. She wore glasses to correct farsighted vision, had a kyphotic thoracic spine, and weakness in her upper back, neck, and shoulders. A keen observer of all that went on around her, Marti’s lively and quick mind was constantly moving and absorbing all that she took in. Mariti wanted a 20-to-30-minute practice that she could do before sitting down to write and do homework. 3. 3. 1. 2.

Unlock the hidden potential of the yoga poses. I have a question for you – name one pose that you can use to strengthen your lower back and core, stretch your hip flexors, stretch and strengthen your upper back, release neck and shoulder tension. 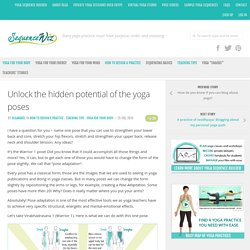 Any ideas? It’s the Warrior 1 pose! Did you know that it could accomplish all those things and more? Yes, it can, but to get each one of those you would have to change the form of the pose slightly. We call that “pose adaptation”. Every pose has a classical form; those are the images that we are used to seeing in yoga publications and doing in yoga classes. Absolutely! Let’s take Virabhadrasana 1 (Warrior 1). Each one of those adaptations will have a specific effect that we can amplify by carrying it throughout the practice. Let’s summarize – why do we adapt? 1. Example: We have illustrated that in Virabhadrasana 1 above. 2. Example: Let’s say that later on in practice you will be doing Dhanurasana. 3. 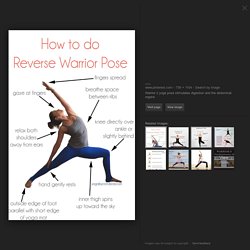 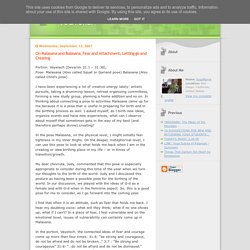 In thinking about connecting a pose to activities Malasana came up for me because it is a pose that is useful in preparing for birth and in the birthing process as well. I asked myself, as I birth new ideas, organize events and have new experiences, what can I observe about myself that sometimes gets in the way of my best (and therefore perhaps divine) creating?

In the pose Malasana, on the physical level, I might initially feel tightness in my inner thighs. Wake Up Mind and Body with Bridge Pose. Some days seem to race by without us ever being truly here for them. 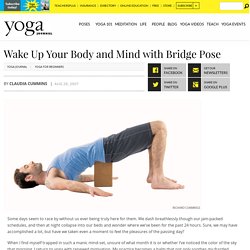 We dash breathlessly though our jam-packed schedules, and then at night collapse into our beds and wonder where we’ve been for the past 24 hours. Sure, we may have accomplished a lot, but have we taken even a moment to feel the pleasures of the passing day? When I find myself trapped in such a manic mind-set, unsure of what month it is or whether I’ve noticed the color of the sky that morning, I return to yoga with renewed motivation. 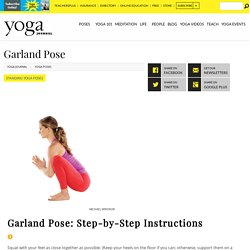 (Keep your heels on the floor if you can; otherwise, support them on a folded mat.) Separate your thighs slightly wider than your torso. Exhaling, lean your torso forward and fit it snugly between your thighs. Press your elbows against your inner knees, bringing your palms to together in Anjali Mudra (Salutation Seal), and resist the knees into the elbows.

This will help lengthen your front torso. See also A Better Way to Sit: Garland Pose To go further, press your inner thighs against the sides of your torso. Hold the position for 30 seconds to 1 minute, then inhale, straighten the knees, and stand into Uttanasana. Day 10 Malasana & Balasana. I went for Taane’s class for the first time this morning and IT WAS AWESOME!! 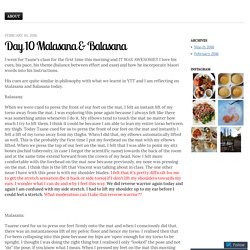 I love his cues, his pace, his theme (balance between effort and ease) and how he incorporate Maori words into his instructions. His cues are quite similar in philosophy with what we learnt in YTT and I am reflecting on Malasana and Balasana today. Balasana: When we were cued to press the front of our feet on the mat, I felt an instant lift of my torso away from the mat. Practice: Malasana / Garland Pose + a mini anatomy lesson! The traditional malasana is practiced with the arms wrapped around the body, with the hands clasping at the back. 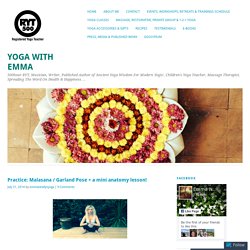 This both requires and gives a big opening to the shoulders and chest, as well as opening the hips and lengthening the Achilles heel (a place in which many runners can experience the symptoms of tendonitis). The more commonly used posture in classes is Upavesasana – which is often mistaken for malasana because of the similarity in appearance. Upavesasana is essentially squatting; something other cultures do a lot when they’re cooking, playing, gardening…. and going to the toilet…. FYI – this is also how we used to use the bathroom, but when the Victorians invented the conventional toilet as we know it today and we began to use that instead, this is when things changed, and consequently our bodies became less able to get rid of waste because of the unnatural positioning of the body. 1. 2. Google Image Result for. Half Moon Pose - Ardha Chandrasana.

Balance Strength and Extension in Half Moon Pose. The Sanskrit word chandra refers to the brilliance of the moon. 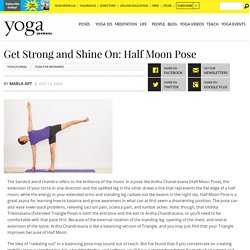 In a pose like Ardha Chandrasana (Half Moon Pose), the extension of your torso in one direction and the uplifted leg in the other draws a line that represents the flat edge of a half moon, while the energy in your extended arms and standing leg radiate out like beams in the night sky. Half Moon Pose is a great asana for learning how to balance and grow awareness in what can at first seem a disorienting position.

How to do Prasarita Padottanasana yoga pose – Part 2B Inhaling, place the hands on the hips. Open the chest, filling the lungs with air and look up.Exhaling, keeping the hands on the hips and the extension in the spine, fold forward so the crown of the head rests on the mat between the feet.Stay here for 5 breaths. With every exhale, stretch the spine further towards the ground.Inhaling, come all the way up. Yoga postures step by step. Setu bandhasana. (Virabhadrasana II) Warrior 2 Pose Benefits.