How Could You Do This to Me? When Characters Betray Other Characters. By Janice Hardy, @Janice_Hardy This week's Refresher Friday takes an updated look at writing character betrayals. 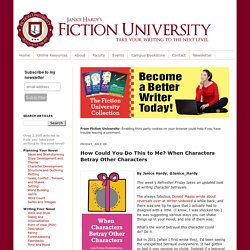 The always fabulous Donald Maass wrote about reversals over at Writer Unboxed a while back, and there was one tip he gave that I actually had to disagree with a little. (I know, I was shocked too.) He was suggesting various ways you can shake things up in your novel, and one of them was: What’s the worst betrayal this character could do? But in 2011 (when I first wrote this), I’d been seeing the unexpected betrayal everywhere. Luckily, that trend has passed, and while we do still see betrayals (they are fun after all), they're more varied these days.

Back then, the betrayals I keep reading about were all the “turn against you and side with the bad guy” types in the climax, which is only one type of way a character can betray another. Let’s look at the official definition of betray: Why Your Novel Won’t Get Published. You know the word “scapegoat,” right? 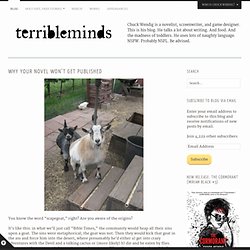 Are you aware of the origins? It’s like this: in what we’ll just call “Bible Times,” the community would heap all their sins upon a goat. The sins were metaphorical; the goat was not. Then they would kick that goat in the ass and force him into the desert, where presumably he’d either a) get into crazy adventures with the Devil and a talking cactus or (more likely) b) die and be eaten by flies. Either way, that goat carried your sins away from town. Your novel is kinda the opposite of that pathetic goat: onto it you heap not your sins, but your greatest hopes and dreams. Brutal honesty time: That novel of yours isn’t likely to get published.

You gotta maximize your chances of putting a kick-ass book into the ecosystem where it bites, kicks, shivs and garrotes any other novel that gets in its way. Wanna know why your novel won’t get published? What is imagination? Have you solved the mystery yet? Imagination. 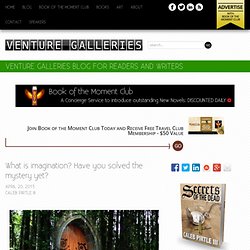 I’ve used it all of my life. So have all of you who have baptized yourself with the curse of writing fiction. You may even be able to explain what it is. I couldn’t. I’ve tried. Albert Einstein said imagination was more important than knowledge. I agree. He also said, “Imagination is everything. I wouldn’t argue with him. And Carl Sagan believed that: “Imagination often carries us to worlds that never were, but without it, we would go nowhere.” Makes perfect sense. But still, when it comes to defining and explaining imagination in my own mind, I was lost, which is generally a place where I’m most comfortable. 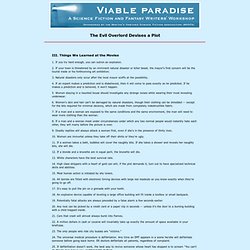 Things We Learned at the Movies 1. If you try hard enough, you can outrun an explosion. 2. If your town is threatened by an imminent natural disaster or killer beast, the mayor's first concern will be the tourist trade or his forthcoming art exhibition. Become A Better Writer. Sharebar As a new practicing instructional designer, I was astonished at the quantity and breadth of writing that was required in this field. Over the years, I’ve needed to write on-screen text, audio scripts, video scripts, training manuals, marketing copy, help documentation and technical explanations. Along the way, I’ve filled in my education gaps through various classes, books and other sources. So I was pleased to come across Roy’s Writing Tools, a podcast in iTunes University. It features Roy Peter Clark, author of Writing Tools: 50 Essential Strategies for Every Writer, as he reads and discusses key points to improve writing.

Order words for emphasis Order your words with awareness. Weak example: The faint of heart are not well-suited for project management. Use adverbs only when they change the meaning of a verb Adverbs are meant to enhance a verb, yet writers often select adverbs that are redundant with the verb. Weak example: She smiled happily. Use repetition to link parts. Characters. Creative Writing.