Antergos Install Error "connection reset" Cannot install Manjaro or Antergos. Cnchi Throws an error during the package download process · Issue #231 · Antergos/Cnchi. How to install KDE's Plasma 5 on Arch Linux - Linux Veda. KDE’s Plasma is one of the most advanced and powerful desktop environments (check out my pick of the best desktop environments for the Linux desktop). 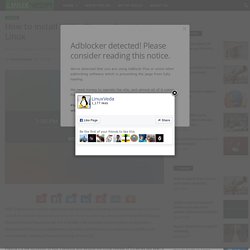 I have used most of the DEs out there and found Plasma be the one that offers me complete customization of my system. Plasma and Arch Linux complement each other: both known to be extremely powerful and customizable – keeping the user in-charge of their PC. Plasma 5 is the successor of KDE’s desktop and despite the initial release of 5.x series last year, it is still under heavy development. It’s debatable whether Plasma 5 is ready for an average user or not, I am tempted to try it out. And I was not disappointed with what I found. There are two ways of installing Plasma 5 on your Arch system; either upgrade the current system or install it on a newly built Arch system. Upgrading the current Plasma 4 system to Plasma 5 Plasma 4 and Plasma 5 can’t run together so you will have to remove kdebase-workspace:

How To install and configure HP printer in Arch Linux - Linux Veda. I dipped my feet in the warm waters of Arch some four months ago and with every passing month I am loving it more. 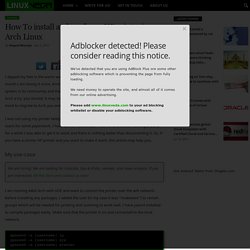 Arch Linux is a great distribution, and the gem of this operating system is its community and the comprehensive wiki it has created. Install Yaourt on Arch Linux. Yet AnOther User Repository Tool is a package helper similar to packer that allows user to easily install packages from Arch User Repository. 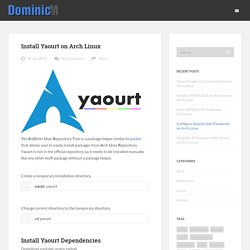 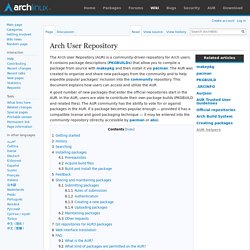 It contains package descriptions (PKGBUILDs) that allow you to compile a package from source with makepkg and then install it via pacman. The AUR was created to organize and share new packages from the community and to help expedite popular packages' inclusion into the community repository. This document explains how users can access and utilize the AUR. A good number of new packages that enter the official repositories start in the AUR. In the AUR, users are able to contribute their own package builds (PKGBUILD and related files).

Getting started Users can search and download PKGBUILDs from the AUR Web Interface. Ensure the base-devel package group is installed (pacman -S --needed base-devel). Build a Killer Customized Arch Linux Installation (and Learn All About Linux in the Process) Docky in ArchLinux does not launch anymore after a system upgrade. If you, like me, use docky for managing your windows and launching your applications, you should have noted that recently an ArchLinux update broke docky because it installed a newer version of mono that docky doesn’t like. 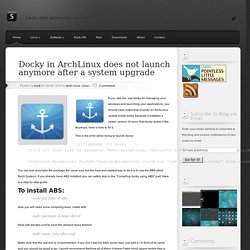 Anyways, here is how to fix it. This is the error when trying to launch docky: [1111@MNAME ~]$ docky Could not load file or assembly 'Mono.GetOptions, Version=2.0.0.0, Culture=neutral, PublicKeyToken=0738eb9f132ed756' or one of its dependencies. Unhandled Exception: System.TypeLoadException: Could not load type 'Docky.Docky' from assembly 'Docky, Version=0.1.0.0, Culture=neutral, PublicKeyToken=null'. You can just recompile the package the usual way, but the best and easiest way to do it is to use the ABS (Arch Build System). Untitled. Pacman Overview - Manjaro Linux. Pacman is a package manager used in Manjaro Linux, mainly developed by the Arch Linux developers. 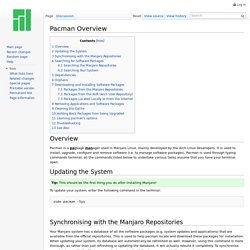 It is used to install, upgrade, configure and remove software (i.e. to manage software packages). Pacman is used through typing commands terminal; all the commands listed below to undertake various tasks assume that you have your terminal open. Tip: This should be the first thing you do after installing Manjaro! To update your system, enter the following command in the terminal: sudo pacman -Syu Your Manjaro system has a database of all the software packages (e.g. system updates and applications) that are available from the official repositories. Sudo pacman -Syy To simultaneously synchronise with the repositories and update your system, enter the command: Yaourt. How To Use Yaourt to Easily Download Arch Linux Community Packages. Introduction Something that can discourage Arch Linux newcomers is the lack of official packages downloadable with its standard package manager pacman. 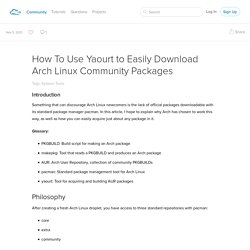 In this article, I hope to explain why Arch has chosen to work this way, as well as how you can easily acquire just about any package in it. Glossary: Yaourt - Installation of Yaourt on Arch Linux... - RevRYL. Yaourt is yet another user repository tool. 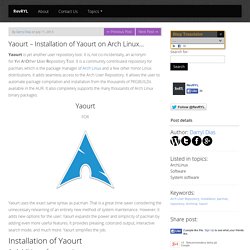 It is, not co-incidentally, an acronym for Yet AnOther User Repository Tool. It is a community contributed repository for pacman, which is the package manager of Arch Linux and a few other minor Linux distributions. It adds seamless access to the Arch User Repository. It allows the user to automate package compilation and installation from the thousands of PKGBUILDs available in the AUR. 7 new but very beautiful conky setups for your linux desktop. If you are a Linux user, you must already know about conky, one of the coolest Linux applications. 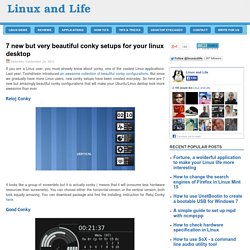 Last year, Techdrivein introduced an awesome collection of beautiful conky configurations. Packaging Guide. KaOS has limited repositories, for many users the options available will be plenty. 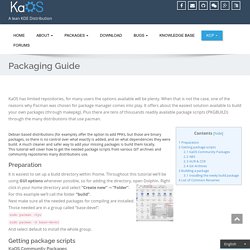 When that is not the case, one of the reasons why Pacman was chosen for package manager comes into play. It offers about the easiest solution available to build your own packages (through makepkg). Plus there are tens of thousands readily available package scripts (PKGBUILD) through the many distributions that use pacman. Debian based distributions (for example), offer the option to add PPA’s, but those are binary packages, so there is no control over what exactly is added, and on what dependencies they were build. A much cleaner and safer way to add your missing packages is build them locally. Preparation. Packages. KaOS - Packages. Evo/Lution.

Related:  Miscellaneous   -  LINUX   -  Build a Killer Customized Arch Linux Installation (and Learn All About Linux in the Process)   -  Education   -  Enterprise