He sexually harassed my 13-year-old daughter – right in front of me. My Name is Not Baby: What Men Need to Understand About Street Harassment. Tatyana Fazlalizadeh, “Stop Telling Women to Smile.” 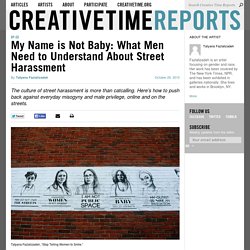 A woman is waiting at the bus stop after just receiving some bad news. A man tells her to smile because she’s “too pretty not to.” A man walks close to a woman on the street to whisper to her, “I like those legs.” As I walk to the train station, a man says in my ear, “Be careful how you dress. There’s a rapist out here.” These stories are only a few picked out of a pool of experiences that make up a woman’s everyday life. Even though these incidents happen in public, they still feel like private, vulnerable moments. When talking about street harassment women tend to get the same responses again and again. Public awareness of street harassment seems to be growing, especially online, and the Twitter hashtags #YesAllWomen and #YouOKSis have sprung up as places for women to share stories and offer support.

Even well intentioned men participate in dialogue that centers their own interests and perpetuates male dominance. How to Tell Creepy Dudes to Leave You Alone. I am an accomplished caller-outer of creepy dudes—the ones who think it’s OK to comment on, or even touch (EW), my body in crowded public places. 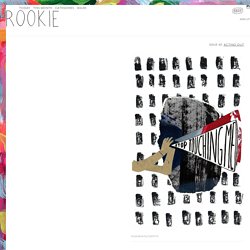 Forget roller coasters and sky-diving; telling someone who is freaking you out to STOP IT, and loudly, so everyone can hear, is one of the purest adrenaline rushes there is because you’re taking power back from the person scaring you. The first time I called out a creepy dude, I went from fearful, self-blaming, and upset to powerful and confident. I haven’t looked back for even a second. Three years ago, I was on a crowded train, and as it stopped to let people off, the seat next to me opened up. A man squeezed past all the standing people and dropped into the seat.

“How ya doin’, sweetie?” Fuck. “Just fine?” Self-blame-y thoughts started running through my head. I let a silence pass and then, not looking up from my phone, said, “Yes. “Hey,” he said. Oh my god, this was escalating. The train went silent. 1. There: People just saw that happen. Projet Crocodiles. Women and Street Harassment. By Gwen Sharp, PhD, Sep 2, 2010, at 02:04 pm Cross-posted at Jezebel. 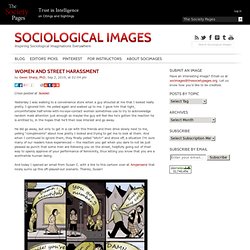 Yesterday I was walking to a convenience store when a guy shouted at me that I looked really pretty. I ignored him. He yelled again and walked up to me. I gave him that tight, uncomfortable half-smile-with-no-eye-contact women sometimes use to try to acknowledge random male attention just enough so maybe the guy will feel like he’s gotten the reaction he is entitled to, in the hopes that he’ll then lose interest and go away. He did go away, but only to get in a car with this friends and then drive slowly next to me, yelling “compliments” about how pretty I looked and trying to get me to look at them. And today I opened an email from Susan C. with a link to this cartoon over at Ampersand that nicely sums up this oft-played-out scenario.

Using Walls to Talk Back to Unwelcome 'Compliments' Robert Stolarik for The New York TimesPosters on a wall on Tompkins Avenue in Bedford-Stuyvesant, Brooklyn, try to make the point that some comments to women aren’t welcome. 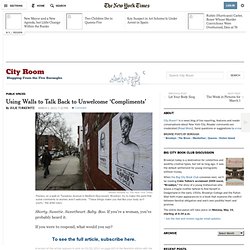 “These things make you feel like your body isn’t yours,” the artist says. Shorty. Sweetie. Sweetheart. Baby. If you were to respond, what would you say? Last fall, Tatyana Fazlalizadeh began replying — through her art — to the dozens of men who approached her in public each week. 18 Kickass Illustrated Responses To Street Harassment. Femmes harcelées dans la rue, agressées dans les lieux publics : luttons, militons, et battons-nous. Au sens propre. (Pétons-leur la gueule) Video: Women of Color Speak Out About Street Harassment. Over at Jezebel, Collier Meyerson writes about that controversial Hollaback video on street harassment and new response from a group of women of color: …black and brown women were excluded, as if we do not exist, or are not affected by street harassment when, in fact, we are more endangered by it. 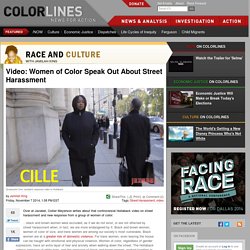 Black and brown women, women of color of size, and trans women are among our society’s most vulnerable. Black women are at a greater risk of domestic violence. For trans women, even leaving the house can be fraught with emotional and physical violence. Women of color, regardless of gender expression, have an extra layer of fear and anxiety when walking down the street. Hollaback did issue an apology, writing: “We agree wholeheartedly that the video should have done a better job of representing our understanding of street harassment and we take full responsibility for that.”