It wasn’t Jackie’s job to get the details of her rape correct. It was Rolling Stone’s. Rolling Stone just doesn’t get it. 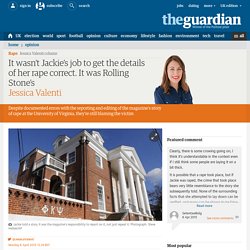 Months after the magazine published a widely-criticized article about an alleged gang rape at the University of Virginia, the details of which proved unverifiable, those responsible still refuse to take any real responsibility. Instead, editors at the magazine once again placed the blame for their errors where it so often ends up when it comes to sexual assault: on a young woman who alleges she was raped. On Sunday night, Rolling Stone released the results of an external investigation conducted by Steve Coll, the dean of the Columbia School of Journalism, who calls the 2014 article an “avoidable” failure. The reporter behind the story, Sabrina Rubin Erdely, has apologized and her original article has been replaced with the extensive report. 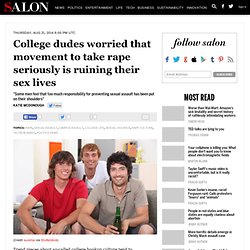 Those arriving this year are finding schools awash in complaints and headlines about sexual assault and responding with programs aimed at changing campus culture that has been blamed for glorifying dorm-bed conquests, excusing rape and providing a safe haven for assailants. For many young men, it’s an added dimension in a campus scene that already appears daunting, said William Pollack, a Harvard Medical School psychologist. Pollack said a patient recently told him about making out with a girl at a party. Things were going fine, the student said, when suddenly a vision of his school’s disciplinary board flew into his head.

“‘I want to go to law school or medical school after this,’” Pollack said, recounting the student’s comments. Malik Gill, the former social chair of the Sigma Chi fraternity at Harvard University, told Bloomberg he has witnessed something similar happening among his friends. University women sign open letter in support of Anne-Marie Roy: 'rape culture is pervasive' March 8, 2014 International Women’s Day We stand with Anne-Marie Roy. 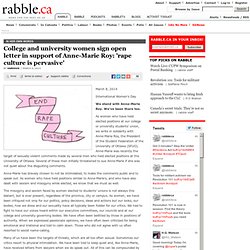 We’ve been there too. As women who have held elected positions at our college or university students’ union, we write in solidarity with Anne-Marie Roy, the President of the Student Federation of the University of Ottawa (SFUO). Anne-Marie was recently the target of sexually violent comments made by several men who held elected positions at the University of Ottawa. Anne-Marie has bravely chosen to not be intimidated, to make the comments public and to speak out.

The misogyny and sexism faced by women elected to students’ unions is not always this blatant, but is ever present, regardless of the province, city or campus. Many of us have been the targets of threats, which are all too often sexual. These conditions are not limited to student politics. Rape culture is pervasive and cannot be blamed solely only on young men fuelled by hormones and alcohol. Udo-parlons-en. Rape Culture at the University of Ottawa. On February 10th, Anne Marie Roy, president of the Student Federation of the University of Ottawa, was sent screenshots of a chat that had taken place earlier in the month between two student federation board members and several other students who are either elected to or participate in various faculty associations. 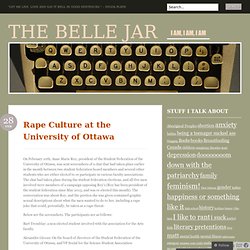 The chat had taken place during the student federation elections, and all five men involved were members of a campaign opposing Roy’s (Roy has been president of the student federation since May 2013, and was re-elected this month). The conversation was about Roy, and the portion she was given contained graphic sexual descriptions about what the men wanted to do to her, including a rape joke that could, potentially, be taken as a rape threat.

Below are the screenshots. The participants are as follows: Bart Tremblay: a non-elected student involved with the association for the Arts faculty Alex Larochelle: VP Social for the Criminology Student Association Alexandre Giroux: What? A school reveals it has a “Fantasy Slut League” No big deal. 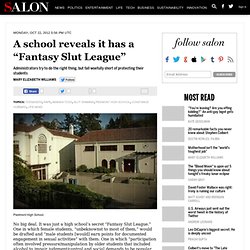 It was just a high school’s secret “Fantasy Slut League.” One in which female students, “unbeknownst to most of them,” would be drafted and “male students [would] earn points for documented engagement in sexual activities” with them. One in which “participation often involved pressure/manipulation by older students that included alcohol to impair judgment/control and social demands to be popular, feel included and attractive to upper classmen.”

Or, as Piedmont, Calif.’s, school superintendent, Constance Hubbard, explains it, “The main thing is that I don’t want to blow this out of proportion. I don’t want to make it something that is some horrible big event that we found out about.” You can give credit to the Piedmont High administration for taking a shot at addressing a sickening revelation in a straightforward way. He adds that many students “were aware of it and participated” and “felt pressure to participate.”