YA fantasy/sf novels with major LGBTQ Characters (356 books) Note: This is a list of all novels which fit the criteria described below. 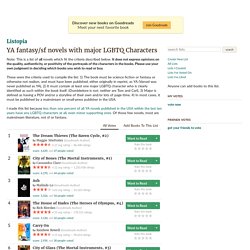 It does not express opinions on the quality, authenticity, or positivity of the portrayals of the characters in the books. Please use your own judgment in deciding which books you wish to read or buy. These were the criteria used to compile the list: 1) The book must be science fiction or fantasy or otherwise not realism, and must have been published, either originally in reprint, as YA (Vanyel was never published as YA), 2) It must contain at least one major LGBTQ character who is clearly identified as such within the book itself.

(Dumbledore is not; neither are Tom and Carl), 3) Major is defined as having a POV and/or a storyline of their own and/or lots of page-time. 4) In most cases, it must be published by a mainstream or small-press publisher in the USA. LGBT Sci-fi/Fantasy YA (104 books) Bisexual Fiction in YA (161 books) MG/YA Books With Bi Characters (51 books) Bisexual MM Fiction (96 books) The Understatement of the Year (The Ivy Years, #3) by Sarina Bowen. Dead in the Desert (L.A. Paranormal, #3) by Lou Harper. Us (Him, #2) by Sarina Bowen. Us (Him, #2) by Sarina Bowen. Out in the Open (Browerton University, #1) by A.J. Truman. Clarity of Lines (Thomas Elkin, #2) by N.R. Walker.