Graphic Artists Guild. Bra Band Project. Resume For Job Seeker With No Experience. 10 Things Writers Don't Know About The Woods - Dan Koboldt. Be a Good Human and Get Your Student Loans Paid Off. This organization will trade your volunteer time in exchange for paying down your student loans. 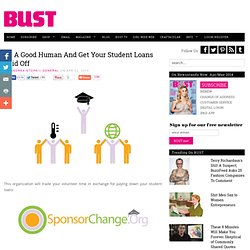 Yes, you read that right. SponsorChange has created a mutually-beneficial initiative that provides people power for high-impact non-profits in need, while simultaneously helping to relieve students of their ever-impending debt. From the Take Part post on the topic: Here's how it works: Graduates with student loan debt sign up to volunteer at organizations that need manpower. The grads help their community by putting in hours toward that organization's goals. *Insert hallelujah chorus* If you're like me and many other underemployed, or flat out unemployed millennial post-grads, you have done your share of volunteer work, usually under the title of "intern" which could also be called "you will work for free and be grateful for the opportunity. 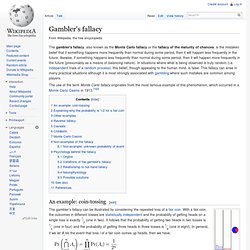 In situations where what is being observed is truly random (i.e. independent trials of a random process), this belief, though appealing to the human mind, is false. This fallacy can arise in many practical situations although it is most strongly associated with gambling where such mistakes are common among players. The use of the term Monte Carlo fallacy originates from the most famous example of this phenomenon, which occurred in a Monte Carlo Casino in 1913.[1][2] An example: coin-tossing[edit] Explaining why the probability is 1/2 for a fair coin[edit] Ten percent of brain myth. The 10% of brain myth is the widely perpetuated urban legend that most or all only make use of 3%, 10% or some other small percentage of their brains. 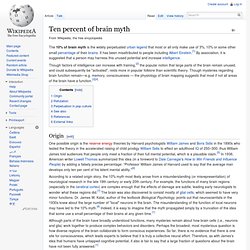 It has been misattributed to people including Albert Einstein.[1] By association, it is suggested that a person may harness this unused potential and increase intelligence. Though factors of intelligence can increase with training,[2] the popular notion that large parts of the brain remain unused, and could subsequently be "activated", rests more in popular folklore than scientific theory. Though mysteries regarding brain function remain—e.g. memory, consciousness — the physiology of brain mapping suggests that most if not all areas of the brain have a function.[3][4] Origin[edit] According to a related origin story, the 10% myth most likely arose from a misunderstanding (or misrepresentation) of neurological research in the late 19th century or early 20th century.

The origin has also been attributed to Dr. Refutation[edit] Wordpress/wp-content/uploads/2010/04/Know-Your-Rights-Booklet1.pdf. Braless in Brasil: Decent Exposures: The Comfort I've been Craving. A few lingerie tips. Undies from “Winnie” range by Agent Provocateur (similar at Aerie) I always get a lot of questions (text, pictures, etc) about lingerie; in Denton, I feel like I’ve kind of become the local resident lingerie specialist. 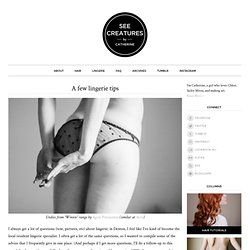 I often get a lot of the same questions, so I wanted to compile some of the advice that I frequently give in one place. (And perhaps if I get more questions, I’ll do a follow-up to this post.) As always, it’s very difficult to diagnose some lingerie problems or give 100% always-accurate advice over the internet, so please take or leave this advice as you see fit! Hydrogen Peroxide removes blood stains.

During my period, I usually only wear black panties (in true medieval doctor fashion); after all, it’s a cosmic law of the universe that every pair of underwear eventually becomes period underwear. However, in the event that your brightly or lightly colored panties do fall victim to this terrible fate, you can remove the blood stains with hydrogen peroxide. The biggest scientific breakthroughs of 2013. How I Paid Off $90,000 In Debt In Three Years. How to Hide Files in JPEG Pictures.

If you’re looking to hide files on your PC hard drive, you may have read about ways to encrypt folders or change the attributes on a file so that they cannot be accessed by prying eyes. 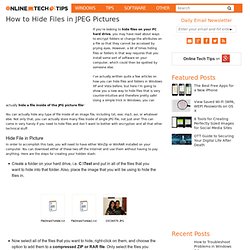 However, a lot of times hiding files or folders in that way requires that you install some sort of software on your computer, which could then be spotted by someone else. I’ve actually written quite a few articles on how you can hide files and folders in Windows XP and Vista before, but here I’m going to show you a new way to hide files that is very counter-intuitive and therefore pretty safe! Using a simple trick in Windows, you can actually hide a file inside of the JPG picture file! You can actually hide any type of file inside of an image file, including txt, exe, mp3, avi, or whatever else. Not only that, you can actually store many files inside of single JPG file, not just one! Hide File in Picture Create a folder on your hard drive, i.e. Now here’s the fun part!