Les meilleurs sandwiches de Paris. Gatsby, Vegemite, Croque Monsieur, Arepa, and Other Must-Eat International Sandwiches. 10 Montreal Sandwiches You Need To Eat. A very enticing article has been trending around the city that lists 35 sandwiches you have to eat before you die. 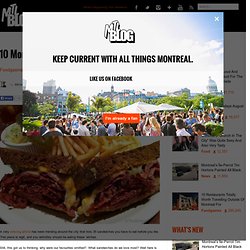 This piece is legit, and you definitley should be eating these ‘wiches. Still, this got us to thinking, why were our favourites omitted?. What sandwiches do we love most? Well here is the answer, aka MTL Blog’s list of Epic Montreal Sandwiches You Need To Eat Right Now. TKResto bar: Ramen Burger TK’s ramen-beef creation did make the original list, but I couldn’t help but include it in ours. Boustan: The Creation Another sandwich that made the first list, Boustan’s Creation is basically a fusion of the veggie and meat (chicken or beef) pita. The Grilled Cheese Poutine. Six Bikini Friendly Burger Recipes. Your barbecue guests are in for a shock (and a treat!) When you serve up these tasty, healthy burgers By Matthew G. Kadey, M.S., R.D. 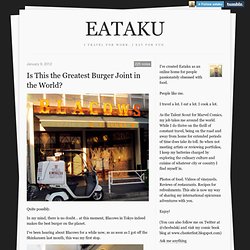 In my mind, there is no doubt… at this moment, Blacows in Tokyo indeed makes the best burger on the planet. I’ve been hearing about Blacows for a while now, so as soon as I got off the Shinkansen last month, this was my first stop. Blacows is a no-nonsense burger place. Owned and run by a butcher, it stakes it reputation on the superior quality of its meat. It prides itself on using only “Kuroge Wagyu”, or “Black-haired Japanese beef”. The first thing you see when you walk up to the door is a chalkboard that tells you what cuts of beef they’re using that day, where that beef came from, the exact number of the cow they bought it from, and the grade, usually always A5. ブラッカウズ/TOP. Best Burgers in the U.S. Cheese & Burger Society.

My Five Favorite Burgers in New York City: The Q. Everything about New York is different. 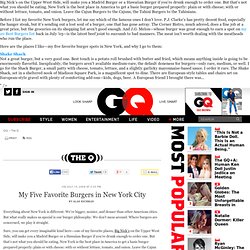 We're bigger, noisier, and denser than other American cities. But what really makes us special is our burger philosophy. We don't mess around. Where burgers are concerned, we play it straight. Shake Shack. Randy Garutti (Shake Shack) at Gel 2010. Danny Meyer Is on a Roll. 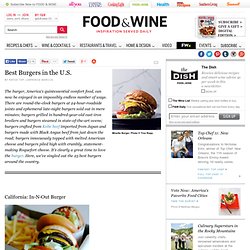 You shoved it into your face as a little kid and used it to soak up cheap beer in college, but now it's time to elevate your grilled cheese sandwich to grown-man territory. 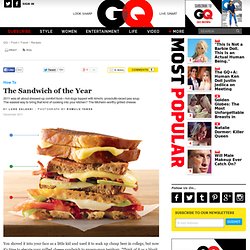 "Think of it as a blank canvas," says Thomas Keller, who serves a buttery Gruyère-and-brioche version at Bouchon Bakery in New York City. In other words, experiment. Once you upgrade from Kraft Singles and Wonder Bread, you'll realize there's nothing Keller can do to a grilled cheese that you can't. A burger bonanza - The Word Magazine. “Eating burgers makes me think of my childhood, and I wanted to revive that,” says Boston-born Frédérik Haspeslagh, the owner of Rachel . 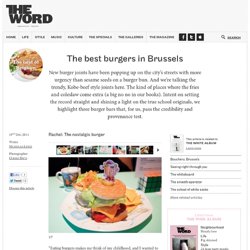 Having been impregnated by American culture during his formative years, Haspeslagh thought to bring a little touch of American comfort to the city’s streets, opening up his burger joint Rachel in the heart of Brussels’ St Jacques neighbourhood – right opposite Le Fontainas. Playing the nostalgia card to great effect, the eatery’s interiors delight in their quirkiness (think Sponge Bob pillows, Rubik cubes, comic books and lots of colour) whilst the burgers on offer place Rachel right at the top of our list.

Traditionalists will no doubt go for ’the Chuck’, a 130 gram, 100 percent pure Belgian beef patty burger with sliced pickles and tomatoes, cheddar cheese, ketchup, mayonnaise and mustard, held together by an authentic soft burger bun topped with sesame seeds and served with nachos and green salad.