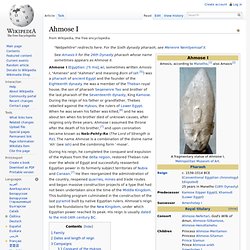 Amenhotep I. Amenhotep I from Ancient Egyptian "jmn-ḥtp" or "yamānuḥātap" meaning "Amun is satisfied" or Amenophis I from Ancient Greek Ἀμένωφις, was the second Pharaoh of the 18th dynasty of Egypt. 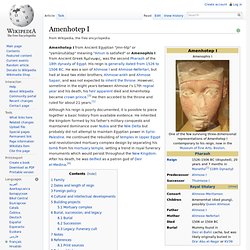 His reign is generally dated from 1526 to 1506 BC. He was a son of Ahmose I and Ahmose-Nefertari, but had at least two elder brothers, Ahmose-ankh and Ahmose Sapair, and was not expected to inherit the throne. However, sometime in the eight years between Ahmose I's 17th regnal year and his death, his heir apparent died and Amenhotep became crown prince.[3] He then acceded to the throne and ruled for about 21 years.[1] Although his reign is poorly documented, it is possible to piece together a basic history from available evidence.

He inherited the kingdom formed by his father's military conquests and maintained dominance over Nubia and the Nile Delta but probably did not attempt to maintain Egyptian power in Syrio-Palestine. Thutmose I. Thutmose I (sometimes read as Thothmes, Thutmosis or Tuthmosis I, meaning Thoth-Born) was the third Pharaoh of the 18th dynasty of Egypt. 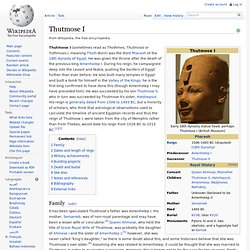 He was given the throne after the death of the previous king Amenhotep I. During his reign, he campaigned deep into the Levant and Nubia, pushing the borders of Egypt further than ever before. He also built many temples in Egypt and built a tomb for himself in the Valley of the Kings; he is the first king confirmed to have done this (though Amenhotep I may have preceded him). 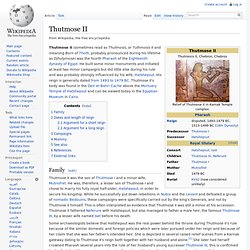 He built some minor monuments and initiated at least two minor campaigns but did little else during his rule and was probably strongly influenced by his wife, Hatshepsut. His reign is generally dated from 1493 to 1479 BC. Thutmose II's body was found in the Deir el-Bahri Cache above the Mortuary Temple of Hatshepsut and can be viewed today in the Egyptian Museum in Cairo. Family[edit] Hatshepsut. For other ancient Egyptians called Maatkare, see Maatkare. 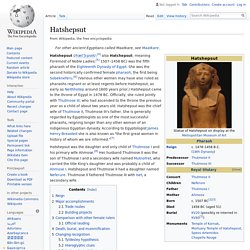 Hatshepsut (/hætˈʃɛpsʊt/;[4] also Hatchepsut; meaning Foremost of Noble Ladies;[5] 1507–1458 BC) was the fifth pharaoh of the Eighteenth Dynasty of Egypt. She was the second historically confirmed female pharaoh, the first being Sobekneferu.[6] (Various other women may have also ruled as pharaohs regnant or at least regents before Hatshepsut, as early as Neithhotep around 1600 years prior.) Thutmose III. Thutmose III (sometimes read as Thutmosis or Tuthmosis III, Thothmes in older history works, and meaning "Thoth is born") was the sixth Pharaoh of the Eighteenth Dynasty. 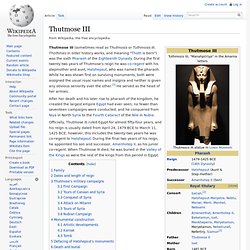 During the first twenty-two years of Thutmose's reign he was co-regent with his stepmother and aunt, Hatshepsut, who was named the pharaoh. While he was shown first on surviving monuments, both were assigned the usual royal names and insignia and neither is given any obvious seniority over the other.[3] He served as the head of her armies. Officially, Thutmose III ruled Egypt for almost fifty-four years, and his reign is usually dated from April 24, 1479 BCE to March 11, 1425 BCE; however, this includes the twenty-two years he was co-regent to Hatshepsut. Amenhotep II. Amenhotep II (sometimes read as Amenophis II and meaning Amun is Satisfied) was the seventh Pharaoh of the 18th dynasty of Egypt. 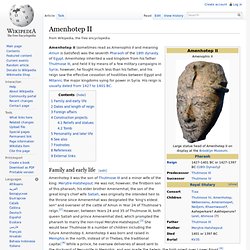 Amenhotep inherited a vast kingdom from his father Thutmose III, and held it by means of a few military campaigns in Syria; however, he fought much less than his father, and his reign saw the effective cessation of hostilities between Egypt and Mitanni, the major kingdoms vying for power in Syria. His reign is usually dated from 1427 to 1401 BC. Thutmose IV. Thutmose IV (sometimes read as Thutmosis or Tuthmosis IV and meaning Thoth bore him) was the 8th Pharaoh of the 18th dynasty of Egypt, who ruled in approximately the 14th century BC. 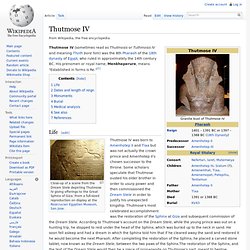 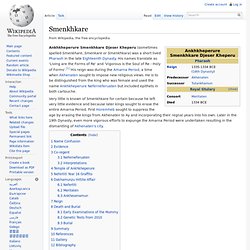 Akhenaten. Akhenaten (/ˌækəˈnɑːtən/;[1] also spelled Echnaton,[7] Akhenaton,[8] Ikhnaton,[9] and Khuenaten;[10][11] meaning "Effective for Aten") known before the fifth year of his reign as Amenhotep IV (sometimes given its Greek form, Amenophis IV, and meaning Amun is Satisfied), was a pharaoh of the Eighteenth dynasty of Egypt who ruled for 17 years and died perhaps in 1336 BC or 1334 BC. 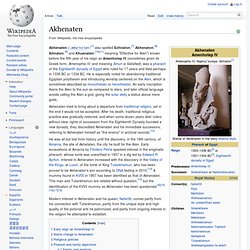 He is especially noted for abandoning traditional Egyptian polytheism and introducing worship centered on the Aten, which is sometimes described as monotheistic or henotheistic. An early inscription likens the Aten to the sun as compared to stars, and later official language avoids calling the Aten a god, giving the solar deity a status above mere gods. Akhenaten tried to bring about a departure from traditional religion, yet in the end it would not be accepted. Tutankhamun. Tutankhamun (alternatively spelled with Tutenkh-, -amen, -amon) was an Egyptian pharaoh of the 18th dynasty (ruled ca. 1332 BC – 1323 BC in the conventional chronology), during the period of Egyptian history known as the New Kingdom.

He is popularly referred to as King Tut. His original name, Tutankhaten, means "Living Image of Aten", while Tutankhamun means "Living Image of Amun". In hieroglyphs, the name Tutankhamun was typically written Amen-tut-ankh, because of a scribal custom that placed a divine name at the beginning of a phrase to show appropriate reverence.[3] He is possibly also the Nibhurrereya of the Amarna letters, and likely the 18th dynasty king Rathotis who, according to Manetho, an ancient historian, had reigned for nine years—a figure that conforms with Flavius Josephus's version of Manetho's Epitome.[4] Life When he became king, he married his half-sister, Ankhesenpaaten, who later changed her name to Ankhesenamun.

Ay. Ay was the penultimate Pharaoh of Ancient Egypt's 18th dynasty. He held the throne of Egypt for a brief four-year period (probably 1323–1319 BC[1] or 1327–1323 BC, depending on which chronology is followed), although he was a close advisor to two and perhaps three of the pharaohs who ruled before him and was said to be the power behind the throne during Tutankhamun's reign.

Ay's prenomen or royal name—Kheperkheperure—means "Everlasting are the Manifestations of Ra" while his birth name Ay it-netjer reads as 'Ay, Father of the God.'[2] Records and monuments that can be clearly attributed to Ay are rare, not only due to his short length of reign, but also because his successor, Horemheb, instigated a campaign of damnatio memoriae against him and other pharaohs associated with the unpopular Amarna Period. Origins[edit] Amarna Period[edit] A stone block shows Ay receiving the 'Gold of Honor' award in his Amarna tomb from Akhenaten. Horemheb. Horemheb (sometimes spelled Horemhab or Haremhab and meaning Horus is in Jubilation) was the last Pharaoh of the 18th Dynasty from either 1319 BC to late 1292 BC,[1] or 1306 to late 1292 BC (if he ruled for 14 years) although he was not related to the preceding royal family and is believed to have been of common birth. Before he became pharaoh, Horemheb was the commander in chief of the army under the reigns of Tutankamun and Ay.

After his accession to the throne, he reformed the state and it was under his reign that official action against the preceding Amarna rulers began. Horemheb demolished monuments of Akhenaten, reusing their remains in his own building projects, and usurped monuments of Tutankhamun and Ay. Horemheb presumably remained childless since he appointed his vizier Paramesse as his successor, who would assume the throne as Ramesses I. Early career[edit] A statue of Horemheb as a scribe His parentage is unknown but he is believed to have been a commoner. Internal reform[edit]