Sous-titres. An+Ethical+Framework+for+Marketing+and+Monetizing+Digital+Content+Media. Animal Jam: ‘Monetizing An App For Kids Is Easy – Doing It Ethically Is What’s Hard’ Monetizing an app is never child’s play, but it becomes even more difficult if the app in question is aimed at children. 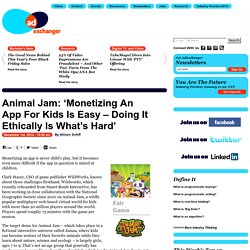 Clark Stacey, CEO of game publisher WildWorks, knows about those challenges firsthand. Wildworks, which recently rebranded from Smart Bomb Interactive, has been working in close collaboration with the National Geographic Society since 2010 on Animal Jam, a wildly popular multiplayer web-based virtual world for kids with more than 20 million players around the world. Players spend roughly 75 minutes with the game per session. The target demo for Animal Jam – which takes place in a fictional interactive universe called Jamaa, where kids can become avatars of their favorite animals while they learn about nature, science and ecology – is largely girls, ages 7 to 9. That’s not an age group that generally has ready access to a credit card, as they shouldn’t, which is why Animal Jam has to get creative. “We’re not looking to push this quickly up the charts,” Stacey said.

Youtube. Marketing, monetization and makers among top kid themes at GDC 2014. While sessions on gaming for older kids and adults tended to significantly outnumber those focused on youngsters at last week’s Game Developers Conference, discussions at the event surrounding the interplay of physical objects with digital content, education-based games, virtual reality experiences and the maker movement highlighted the growing importance of the gaming sector for today’s kids. 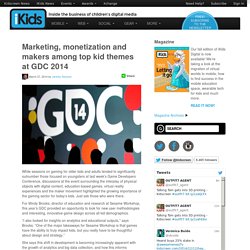 Just ask those who were there. For Mindy Brooks, director of education and research at Sesame Workshop, this year’s GDC provided an opportunity to look for new user methodologies and interesting, innovative game design across all kid demographics. “I also looked for insights on analytics and educational outputs,” says Brooks.

“One of the major takeaways for Sesame Workshop is that games have the ability to truly impact kids, but you really have to be thoughtful about design and strategy.” Brooks concurs. “How do we balance commercial venture and educational gain? PanelPicker. Voting period for this idea type has passed Last year Apple Computer agreed to refund $2,500 charged by a 5-year-old boy to his parents credit through “In-App” purchases. 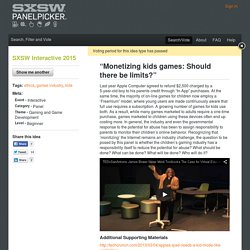 At the same time, the majority of on-line games for children now employ a ‘Freemium” model, where young users are made continuously aware that full use requires a subscription. Free-to-play in childrens' games is bad business. On Wednesday, January 15th, Apple announced it would refund at least $32.5MM to users whose accounts had made in-app purchases in childrens' games as part of a settlement with the US Federal Trade Commission. 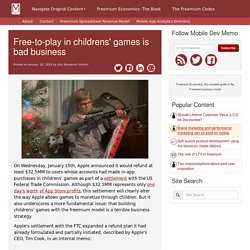 Although $32.5MM represents only one day's worth of App Store profits, this settlement will clearly alter the way Apple allows games to monetize through children. But it also underscores a more fundamental issue: that building childrens' games with the freemium model is a terrible business strategy. Apple's settlement with the FTC expanded a refund plan it had already formulated and partially initiated, described by Apple's CEO, Tim Cook, in an internal memo: Monetizing Kid's Apps. Monetizing Kid's Apps Discussion in 'Discussion' started by jammydodger, Jun 6, 2014. jammydodger Member Joined: Apr 14, 2014 Messages: 32 This seems to be a sensitive area that the App Store is already addressing - putting advertising and in-app purchases on children's educational apps, storybooks and games. 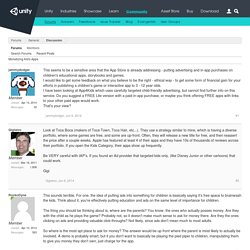 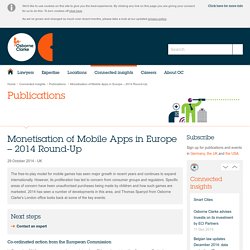 However, its proliferation has led to concern from consumer groups and regulators. Specific areas of concern have been unauthorised purchases being made by children and how such games are marketed. 2014 has seen a number of developments in this area, and Thomas Spanyol from Osborne Clarke's London office looks back at some of the key events: Next steps. [Gamesbriefers] Should you monetise children’s apps with ads? Monetizing children best practice. Ramin Shokrizade's Blog - Monetizing Children. The following blog post, unless otherwise noted, was written by a member of Gamasutra’s community. 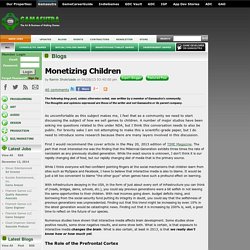 The thoughts and opinions expressed are those of the writer and not Gamasutra or its parent company. As uncomfortable as this subject makes me, I feel that as a community we need to start discussing the subject of how we sell games to children. A number of major studios have been asking me questions related to this under NDA, but I think this conversation needs to also be public.

For brevity sake I am not attempting to make this a scientific-grade paper, but I do need to introduce some research because there are many layers involved in this discussion. First I would recommend the cover article in the May 20, 2013 edition of TIME Magazine. While I think everyone will feel confident pointing fingers at the social mechanisms that children learn from sites such as MySpace and Facebook, I have to believe that interactive media is also to blame. The Role of the Prefrontal Cortex Future Trends.