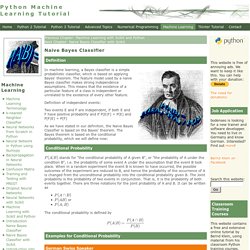 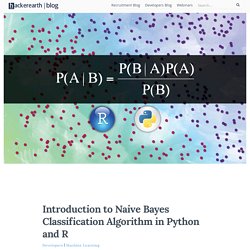 It is based on Bayes’ probability theorem. It is primarily used for text classification which involves high dimensional training data sets. A few examples are spam filtration, sentimental analysis, and classifying news articles. It is not only known for its simplicity, but also for its effectiveness. It is fast to build models and make predictions with Naive Bayes algorithm. Siml/Naive_Bayes.ipynb at master · taspinar/siml. Understanding Naive Bayes Classifier from scratch : Python code – Machine Learning in Action. The Naive Bayes classifier is a frequently encountered term in the blog posts here; it has been used in the previous articles for building an email spam filter and for performing sentiment analysis on movie reviews. 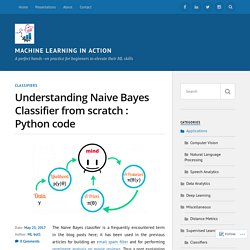 Thus a post explaining its working has been long overdue. Despite being a fairly simple classifier with oversimplified assumptions, it works quite well in numerous applications. Let us now try to unravel its working and understand what makes this family of classifiers so popular. We begin by refreshing our understanding about the fundamental concepts behind the classifier – conditional probability and the Bayes’ theorem. This is followed by an elementary example to show the various calculations which are made to arrive at the classification output. 6 Easy Steps to Learn Naive Bayes Algorithm (with code in Python) Naive Bayes Classifier From Scratch in Python. The Naive Bayes algorithm is simple and effective and should be one of the first methods you try on a classification problem. 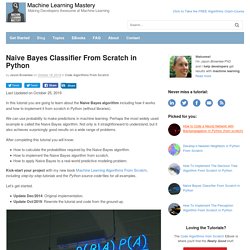 In this tutorial you are going to learn about the Naive Bayes algorithm including how it works and how to implement it from scratch in Python. Update: Check out the follow-up on tips for using the naive bayes algorithm titled: “Better Naive Bayes: 12 Tips To Get The Most From The Naive Bayes Algorithm“.Update March/2018: Added alternate link to download the dataset as the original appears to have been taken down.

Dynamic bayesian inference: Topics by WorldWideScience.org. Naïve Bayes in Python. The Naive Bayes Algorithm The naïve Bayes algorithm is a classifier based on Bayes' theorem. 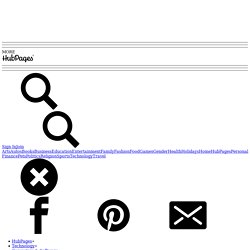 It relies on independence between features, which sometimes necessitates pre-processing (for example, via eigenvalue decomposition). Formally, the algorithm operates under supervised learning. As implemented below, input data (consisting of feature vectors and corresponding classification) is supplied to the constructor. Hierarchical Bayes for R or Python. CRAN Task View: Bayesian Inference. : machine learning in Python — scikit-learn 0.21.2 documentation.

FANDOM powered by Wikia. Python Markov Chains Beginner Tutorial (article) A Markov chain is a mathematical system usually defined as a collection of random variables, that transition from one state to another according to certain probabilistic rules. 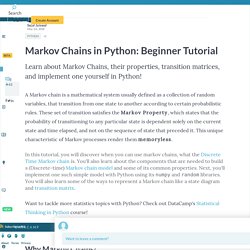 These set of transition satisfies the Markov Property, which states that the probability of transitioning to any particular state is dependent solely on the current state and time elapsed, and not on the sequence of state that preceded it. This unique characteristic of Markov processes render them memoryless. Want to tackle more statistics topics with Python? Check out DataCamp's Statistical Thinking in Python course! Let's transition... Why Markov Chains? Markov Chains have prolific usage in mathematics. Vpavlenko/bulls-and-cows: Solver for "Bulls and cows" inspired by Akinator Bayesian entropy something something. 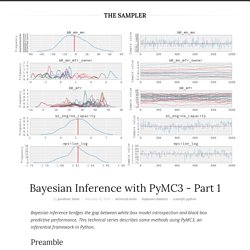 This technical series describes some methods using PyMC3, an inferential framework in Python. I find it useful to think of practical data science as spanning a continuum between traditional statistics and machine learning. To illustrate: We might use tools from traditional statistics when creating a time-to-event model because it's useful to know exactly how a particular attribute affects survival. e.g.

Frequentism and Bayesianism IV: How to be a Bayesian in Python. More verbosely: emcee is extremely lightweight, and that gives it a lot of power. 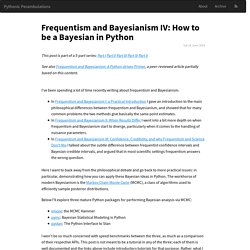 All you need to do is define your log-posterior (in Python) and emcee will sample from that distribution. Because it's pure-Python and does not have specially-defined objects for various common distributions (i.e. uniform, normal, etc.) I thought it might be slower than the others, but its performance on this problem is impressive. This is perhaps due to the more sophisticated default sampling scheme, so the benchmark may not be a fair comparison. pymc is more full-featured, and once you get the hang of the decorator syntax for defining variables, distributions, and derived quantities, it is very easy to use. 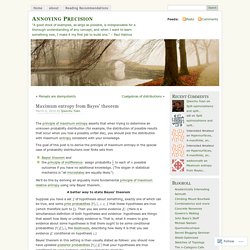 A better way to state Bayes’ theorem Suppose you have a set of hypotheses about something, exactly one of which can be true, and some prior probabilities that these hypotheses are true (which therefore sum to ). . 0307055. Schwarz : Estimating the Dimension of a Model. Think about learning Bayes using Python. When Mike first discussed Allen Downey’s Think Bayes book project with me, I remember nodding a lot. 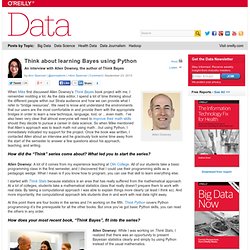 As the data editor, I spend a lot of time thinking about the different people within our Strata audience and how we can provide what I refer to “bridge resources”. We need to know and understand the environments that our users are the most comfortable in and provide them with the appropriate bridges in order to learn a new technique, language, tool, or …even math. I’ve also been very clear that almost everyone will need to improve their math skills should they decide to pursue a career in data science. So when Mike mentioned that Allen’s approach was to teach math not using math…but using Python, I immediately indicated my support for the project. Once the book was written, I contacted Allen about an interview and he graciously took some time away from the start of the semester to answer a few questions about his approach, teaching, and writing.

Orange Scripting Reference – Orange Documentation – Orange. Untitled - bams_79_01_0061.pdf. Download – Orange. This page contains nightly builds from the code repository. These are typically stable and we recommend using them. Windows ¶ Full package: Snapshot of Orange with Python 2.7 and required libraries This package is recommended to those installing Orange for the first time. It includes all required libraries (Python, PythonWin, NumPy, PyQt, PyQwt ...), though it will not change any libraries you might already have. You, A Bayesian. Everyday use of a mathematical concept The concept of probability is not alien to even the least mathematically versed among us: even those who do not remember the basic math they had in primary schools use it currently in their daily reasoning.

I find the liberal use of the word "probability" (and derivates) in common language interesting, for two reasons. One, because the word has in fact a very definite mathematical connotation. And two, because the word is often used to discuss the knowledge of a system's evolution in time without a clear notion of which, among either of two strikingly different sources, is the cause of our partial or total ignorance. 1. 2. Estatística: Introduçao à Estimacao Bayesiana. 1. Introdução. Next: 2. Logic and the Western concept of mind : Bayesian RationalityThe probabilistic approach to human reasoning Oxford Scholarship Online.

DOI:10.1093/acprof:oso/9780198524496.003.0001 This chapter begins with a discussion of the Western conception of the mind. It traces two viewpoints of the basis of people’s ability to carry out ‘deductive’ reasoning tasks, one based on logic and the other on probability. It sets out the claims for which it is argued that probability, rather than logic, provides an appropriate framework for providing a rational analysis of human reasoning. International Journal of Psychophysiology - Prediction, perception and agency. Open Access Abstract The articles in this special issue provide a rich and thoughtful perspective on the brain as an inference machine. They illuminate key aspects of the internal or generative models the brain might use for perception. Furthermore, they explore the implications for a sense of agency and the nature of false inference in neuropsychiatric syndromes. In this review, I try to gather together some of the themes that emerge in this special issue and use them to illustrate how far one can take the notion of predictive coding in understanding behaviour and agency.

An overview of statistical classifiers is given in the article on pattern recognition. Introduction[edit] Bayesian Inference and Posterior Probability Maps. Neuroscience & Biobehavioral Reviews - The Bayesian brain: Phantom percepts resolve sensory uncertainty. Abstract Phantom perceptions arise almost universally in people who sustain sensory deafferentation, and in multiple sensory domains. The question arises ‘why’ the brain creates these false percepts in the absence of an external stimulus? The model proposed answers this question by stating that our brain works in a Bayesian way, and that its main function is to reduce environmental uncertainty, based on the free-energy principle, which has been proposed as a universal principle governing adaptive brain function and structure. The Bayesian brain can be conceptualized as a probability machine that constantly makes predictions about the world and then updates them based on what it receives from the senses.