Laws & Regulations. Poisoned city: The full story behind the Flint water crisis. In the summer of 2014, Lee-Anne Walters — a mother of four in Flint, Michigan — noticed something strange. 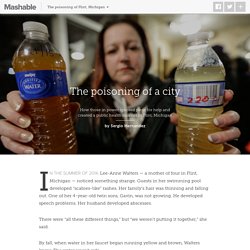 Guests in her swimming pool developed “scabies-like” rashes. Her family’s hair was thinning and falling out. One of her 4-year-old twin sons, Gavin, was not growing. He developed speech problems. Her husband developed abscesses. There were “all these different things,” but “we weren’t putting it together,” she said. By fall, when water in her faucet began running yellow and brown, Walters knew: The water wasn’t safe. Though it wouldn’t be confirmed until much later, she was right. Despite the severity of contamination and many warnings, it would take many more months before officials did anything. “If I was a parent up there, I would be beside myself,” President Barack Obama said during a visit to Michigan earlier this month. But amidst all the hand-wringing, two questions are still largely unanswered by officials: How could this go on for so long? 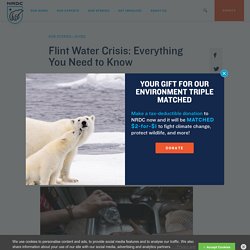 Inadequate treatment and testing of the water resulted in a series of major water quality and health issues for Flint residents—issues that were chronically ignored, overlooked, and discounted by government officials even as complaints mounted that the foul-smelling, discolored, and off-tasting water piped into Flint homes for 18 months was causing skin rashes, hair loss, and itchy skin. EPA announces proposed revisions to Lead and Copper Rule. The U.S. 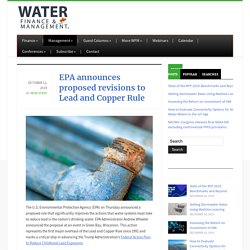 In conjunction with the announcement, EPA and the Department of Housing and Urban Development (HUD) have launched a new website that summarizes available federal programs that help finance or fund lead service line (LSL) replacement. Background. New Flint water crisis documentary highlights aging U.S. infrastructure. FLINT (WJRT) (9/12/2019) - Flint will be on the spotlight on the small screen for the second time this week with the premier of a new documentary based on the water crisis. 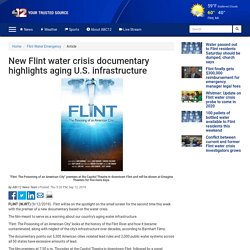 The film meant to serve as a warning about our country's aging water infrastructure. "Flint: The Poisoning of an American City" looks at the history of the Flint River and how it became contaminated, along with neglect of the city's infrastructure over decades, according to Barnhart Films. The documentary points out 5,300 American cities violated lead rules and 2,000 public water systems across all 50 states have excessive amounts of lead. The film premiers at 7:30 p.m. Thursday at the Capitol Theatre in downtown Flint, followed by a panel discussion with the filmmakers. "Flint: The Poisoning of an American City" will be shown Friday through Wednesday at Emagine Theaters in Birch Run, Novi and Canton Township.

Listen to "Not Safe to Drink," a special documentary about the Flint water crisis. Lessons from Flint's Water Crisis: An Interview with Steve Friess. By John Counts | Jan. 21, 2016 Flint water has poisoned more than just its children. 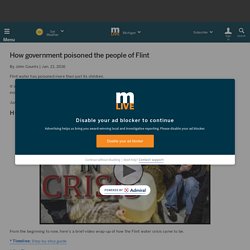 It's poisoned the citizenry's faith in government, which is supposed to provide safe drinking water, one of life's most basic essentials. Just ask Pete Nichols who was picking up bottles of water from a downtown fire station on a recent weekday. From the beginning to now, here's a brief video wrap-up of how the Flint water crisis came to be. * Timeline: Step-by-step guide * Key Figures:What they knew * Graphic: How lead got into the water * Ongoing Flint Water Coverage "Somebody needs to go to jail for this, man," said Nichols. It's poisoned people's trust in the folks elected to protect the public from such calamities. Just ask Willester Dunn, a resident of West Stewart Avenue who was also picking up water from a fire station. "Politicians get paid to take care of the people," he said.

It's poisoned the spirit of a hard-knock town already accustomed to living with poverty, high-crime and unemployment. Rev. (192) Flint Water Crisis Update. Lead in the Water – The Flint Water Crisis – Compound Interest. Science-based medicine versus the Flint water crisis. This is exactly the sort of cover story you don’t want to see about your city in TIME. 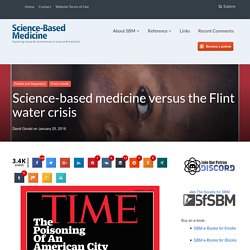 One aspect of science-based medicine that is not covered frequently on this blog, aside from vaccines and antivaccine pseudoscience, but perhaps should be, is the intersection of SBM and public health. Unfortunately, living as I do in southeast Michigan right now, I’ve been on the receiving end of an inescapable lesson in what happens when the government fails in its mission to enforce science-based public health issues. I’m referring, of course, to what has become known worldwide as the Flint water crisis. The Flint water crisis has become so famous that unfortunately it now has its very own Wikipedia page.

That is not an “honor” I like to see for my state, and I’m sure the residents of Flint, which is an hour’s drive north of where I live, would agree. I was born and raised in Detroit. 10 Things They Won’t Tell You About the Flint Water Tragedy. But I Will. News of the poisoned water crisis in Flint has reached a wide audience around the world. 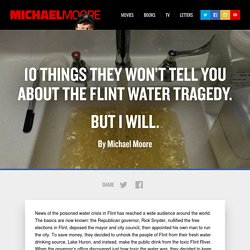 The basics are now known: the Republican governor, Rick Snyder, nullified the free elections in Flint, deposed the mayor and city council, then appointed his own man to run the city. To save money, they decided to unhook the people of Flint from their fresh water drinking source, Lake Huron, and instead, make the public drink from the toxic Flint River. When the governor’s office discovered just how toxic the water was, they decided to keep quiet about it and covered up the extent of the damage being done to Flint’s residents, most notably the lead affecting the children, causing irreversible and permanent brain damage. Citizen activists uncovered these actions, and the governor now faces growing cries to resign or be arrested. Here are ten things that you probably don’t know about this crisis because the media, having come to the story so late, can only process so much. Cascading Challenges in the Global Water Crisis. 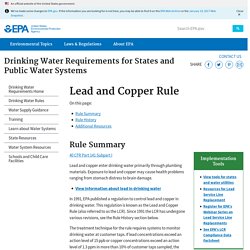 Exposure to lead and copper may cause health problems ranging from stomach distress to brain damage.