The Peugeot e-208 and Peugeot e-2008 have a greater range. The new Skoda KAROQ arrives at the end of the month. Since its introduction in spring 2017, the Skoda KAROQ has played a significant part in the Czech automaker's success. 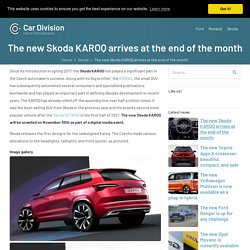 Along with its 'big brother,' the KODIAQ, the small SUV has subsequently astonished several consumers and specialized publications worldwide and has played an important part in defining Skoda's development in recent years. The KAROQ has already rolled off the assembly line over half a million times. It was the best-selling SUV from Skoda in the previous year and the brand's second most popular vehicle after the Skoda OCTAVIA in the first half of 2021. Waiting periods for electric vehicles may get even longer. Despite a global chip scarcity, electric vehicles are on the rise. 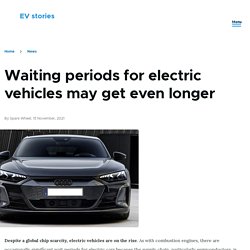 As with combustion engines, there are occasionally significant wait periods for electric cars because the supply chain, particularly semiconductors, is stagnant due to supply chain instabilities triggered by the current epidemic. Following market research, Carwow predicts that delivery times for electric vehicles will continue to climb. Matthias Kahle won the Lausitz rallye with a SKODA FABIA Rally2 Evo.

Matthias Kahle, the driver of a SKODA FABIA Rally2 Evo, has won the Lausitz rally for the sixth time. 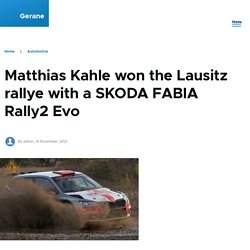 The native of Görlitz, together with his co-driver Christian Dörr, benefitted from a thrilling final at his home game with a decision in the final meters. It is the seventh victory for a SKODA squad at Central Europe's most significant gravel race. The new Mazda CX-5 family SUV from 31,500 euros. Mazda has unveiled the impending makeover for the brand's flagship vehicle, the CX-5 family SUV. 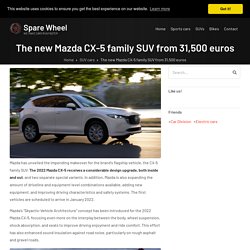 The 2022 Mazda CX-5 receives a considerable design upgrade, both inside and out, and two separate special variants. In addition, Mazda is also expanding the amount of driveline and equipment level combinations available, adding new equipment, and improving driving characteristics and safety systems. The first vehicles are scheduled to arrive in January 2022. Mazda's "Skyactiv-Vehicle Architecture" concept has been introduced for the 2022 Mazda CX-5, focusing even more on the interplay between the body, wheel suspension, shock absorption, and seats to improve driving enjoyment and ride comfort. This effort has also enhanced sound insulation against road noise, particularly on rough asphalt and gravel roads. 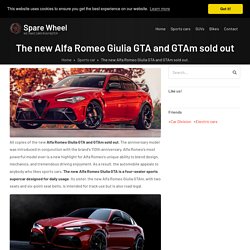 The anniversary model was introduced in conjunction with the brand's 110th anniversary. Alfa Romeo's most powerful model ever is a new highlight for Alfa Romeo's unique ability to blend design, mechanics, and tremendous driving enjoyment. The new Proace CITY Electric is available for purchase. The new Toyota Proace CITY Electric represents a substantial extension of Toyota Professional's product line in electric light vans and associated passenger vehicles, establishing the brand as a prominent contender in Europe's compact van sector. 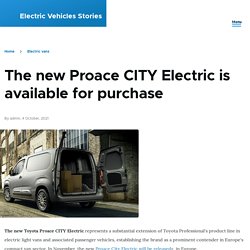 In November, the new Proace City Electric will be released in Europe. The Proace CITY Electric has a 50kWt battery with a range of 271-274 km on L1 and 269 km on L2. The new Toyota was tested with half the payload for the quoted range. Over 1,000 Ford Kuga Plug-in Hybrids are available at Danish Ford dealers. Taxes for plug-in hybrids will rise at the end of the year, causing the price of the desired Ford Kuga plug-in Hybrid to increase as well. 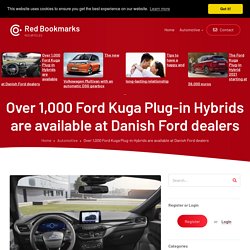 However, Ford has secured over 1,000 vehicles, and if you order before the end of the year, Ford will keep the price before the increase in taxes goes into force. Ford has taken the lead in the electric vehicle market with the famous Ford Kuga Plug-in Hybrid. The Kuga Plug-in Hybrid was the best-selling passenger car in Denmark in the first half of 2021 and the best-selling plug-in hybrid in Europe during the same time. The SUV's remarkable performance may be due to its exquisite appearance, roomy interior, comfortable driving characteristics, high degree of safety, and, of course, the fact that it can drive a long distance on electricity alone and is accessible at very affordable rates. A change in the tax on plug-in hybrids will go into effect on January 1, 2022, which will impact pricing. What distinguishes the Dacia Spring electric car? An electric car for 40 euros - no problem, here you go! 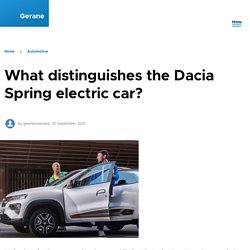 The Dacia Spring electric car is over the counter for less than 40 euros, and private individuals can dust it off for around 100 euros. However, there are a few tradeoffs that you have to make. Free Dofollow Link. The new 2022 Ford GT '64 Heritage Edition is unveiled. The wait is over. 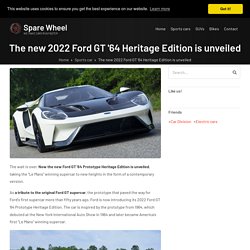 Now the new Ford GT '64 Prototype Heritage Edition is unveiled, taking the "Le Mans" winning supercar to new heights in the form of a contemporary version. As a tribute to the original Ford GT supercar, the prototype that paved the way for Ford's first supercar more than fifty years ago, Ford is now introducing its 2022 Ford GT '64 Prototype Heritage Edition. The car is inspired by the prototype from 1964, which debuted at the New York International Auto Show in 1964 and later became America's first "Le Mans" winning supercar. Do you know what problems your car has? The automotive industry is an established market with enormous potential for development. 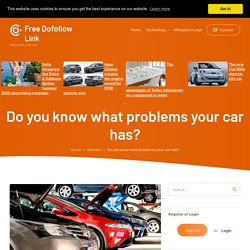 A large number of cars present on the increasingly crowded streets of cities shows not only a favourable economic factor but rather a landmark for increasing people's quality of life. The option to call for various tasks and activities in the car, personal property is becoming more and more used, a fact speculated by specific fields of activity and implicitly businesses related to the car area. The new 2021 Skoda Fabia arrived. Depending on the trim level, the fourth generation of the flourishing model offers up to 43 of the brand's signature Simply Clever features, which have earned the Czech car manufacturer respect for making customers' everyday lives on the road easier.

Five of these innovations are entirely new to the Skoda range, while eight others now feature in the 2021 Skoda Fabia for the first time. In addition, new accessories such as the removable cup holder between the front seats complement Skoda classics like the ice scraper with tyre tread depth gauge located inside the fuel filler flap, the car park ticket holder on the A-pillar and the umbrella inside the driver's door. Depending on the trim level, the fourth-generation Skoda Fabia now offers up to 43 of these clever features – more than ever. Skoda offers five Simply Clever ideas for the new Skoda Fabia for the first time.

Skoda is offering five of its ingenious Simply Clever details for the new FABIA for the first time. All Skoda models received excellent enhancements this year. The entire Skoda range receives the steering wheel from the new Skoda Octavia. In addition, all engines have been upgraded to meet the Euro 6d standards. The Skoda Karoq, Skoda Kodiaq and Skoda Superb are offered with new assistance systems, and Skoda Kamiq and Skoda Scala received new equipment. Depending on the equipment and the optional packages, the steering wheel comes with two or three spokes (for the sports versions), and for most versions, it is covered in leather. The new Audi RS 3 compact sports car. The five-cylinder high-performance engine makes the Audi RS 3 something unique in its market segment. The 2.5 TFSI engine has won the title "International Engine of the Year" nine times in a row!

In its latest generation, the engine is more powerful than ever. The maximum speed in Paris will be limited to 30 km/ Paris, the capital of France, will adopt a maximum speed of 30 km/h on most streets starting with August 30. It is one of the promises of the current mayor, Anne Hidalgo, who wants sustainable mobility. The new rule will apply to all traffic participants. There will be exceptions only on a few main boulevards (Champs Elysees, boulevard de Grand-Armee, boulevard Foch) and on Peripherique, the ring road that surrounds Paris. Authorities say limiting the maximum speed in the city will reduce noise and pollution. The new measure has already sparked a wave of protests, especially from taxi drivers and service providers in Paris, who say they will not be able to reach their destination in time.

The new Volkswagen Polo GTI is ready for 2022. The new Volkswagen ID.4 GTX electric SUV with a sports car vibe. It was about time. Volkswagen presents the ID. 4 GTX, the first electric car with a sports car vibe from the German manufacturer, which paves the way for future performance models. With the Golf GTI being one of the most desired cars in the Volkswagen range, it was strange not to find a sports version in the ID family. Finally, the ID.4 electric SUV becomes Volkswagen ID. 4 GTX sports SUV and it is the beginning of a new family of products. The GTX abbreviation identifies the flagship sports variant within the ID range, it is synonymous with a product name in its own right. Renault Laguna GT - laborious dynamic. A new Dacia Dokker Camper from 18,990 euros. Renault Captur is a compact, unaggressive crossover. Auto & Vehicles. What Electric Cars Are All About. The new 2021 Peugeot 3008 Hybrid 4 with 300 hp. The new Peugeot 308 plug-in hybrid is build on the EMP2 platform.

The new Dacia Sandero RS in Paris. Naran Automotive presents the Naran hypercar. The next Mazda MX-5 will be a hybrid – Car Alternators. - Profile.