How Mononoke Hime Was Born - 2004. The official site of Ghibli Museum, Mitaka in Japan. Ghibli Blog - Studio Ghibli, Animation and the Arts: Hayao Miyazaki Comics: "A Trip to Tynemouth" Time for another installment in our series on Hayao Miyazaki manga comics. 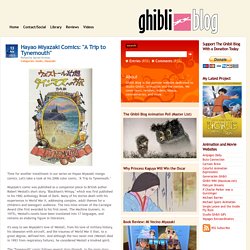 Let's take a look at his 2006 color comic, "A Trip to Tynemouth. " Miyazaki's comic was published as a companion piece to British author Robert Westall's short story, "Blackham's Wimpy," which was first published in his 1982 anthology, Break of Dark. Many of his stories dealt with his experiences in World War II, addressing complex, adult themes for a children's and teenagers' audience. The two-time winner of the Carnegie Award (the first awarded to his first novel, The Machine Gunners, in 1975), Westall's novels have been translated into 17 languages, and remains an enduring figure in literature. It's easy to see Miyazaki's love of Westall, from his love of military history, his obsession with aircraft, and the traumas of World War II that, to a great degree, defined him. The "Tynemouth" comic follows several story threads. It is this segment that resonates most strongly for me. [ Studio Ghibli ] Laputa: Castle in the Sky 1986 Promotion. 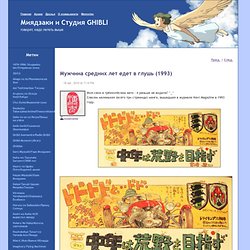 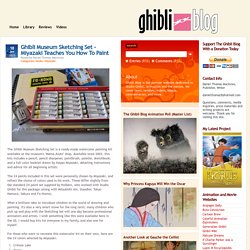 Available since 2003, this kits includes a pencil, pencil sharpener, paintbrush, palette, sketchbook, and a full-color booklet drawn by Hayao Miyazaki, detailing instructions and advice for all beginning artists. The 24 paints included in this set were personally chosen by Miyazaki, and reflect the choice of colors used in his work. These differ slightly from the standard 24-paint set supplied by Holbein, who worked with Studio Ghibli for this package (along with Mitsubishi Uni, Staedler, Tokyo Namura, Sakura and Fo-Homo).

What a brilliant idea to introduce children to the world of drawing and painting. It's also a very smart move for the long term; many children who pick up and play with the Sketching Set will one day become professional animators and artists. For those who want to recreate this watercolor kit on their own, here are the 24 colors selected by Miyazaki: Ghibli Blog - Studio Ghibli, Animation and the Movies: Hayao Miyazaki Comics - Painting Techniques (Updated w/Translation) I found this one-panel Hayao Miyazaki comic on Twitter early this morning, and immediately re-tweeted it. 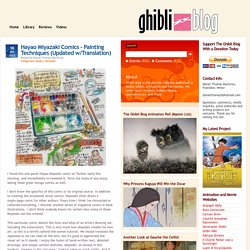 Turns out many of you enjoy seeing these great manga comics as well. I don't know the specifics of this comic or its original source. In addition to creating the occasional serial comics, Miyazaki often draws a single-page comic for other authors. Every time I think I've chronicled or collected everything, I discover another series of magazine covers or book illustrations. I don't think anybody knows for certain how many of these Miyazaki-san has created. This particular comic details the hows and whys of an artist's drawing set, including the watercolors. I really love Miyazaki's watercolor manga comics. You can click on the photo to view in its full size. Update: Thanks to reader "beyond," who informed me that this panel comes from the Ghibli Museum Sketch Set, which is sold at the Ghibli Museum in Mitaka, Japan.

1-1/14 PRINCESS MONONOKE [Backstage]w/EnglishSub. Behind The Scenes Of "Spirited Away" (Part 2) Making Of La Princesa Mononoke 1: Making Of Omohide Poro Poro 3: Yume to Kyoki no Okoku (The Kingdom of Dreams & Madness) Making Of El Castillo Vagabundo 1: