EcoTone: news and views on ecological science. Inside the rounded fruit of a fig tree is a maze of flowers. 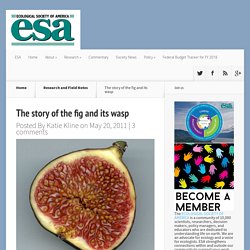 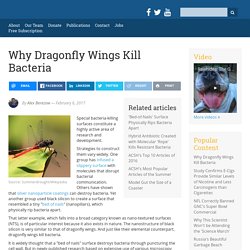 Strategies to construct them vary widely. One group has infused a slippery surface with molecules that disrupt bacterial communication. Others have shown that silver nanoparticle coatings can destroy bacteria. Study reveals that climate change could dramatically alter fragile mountain habitats. Professor Bardgett, based in Mancheser’s School of Earth and Environmental Sciences, added: "Mountain areas cover a large part of the Earth's land surface and are very vulnerable to climate change. ”Our results, which come from an extensive study of elevation gradients across seven mountain regions of the world - including Japan, British Columbia, New Zealand, Patagonia, Colorado, Australia, and Europe - suggest that future climate warming will substantially alter the way that these sensitive ecosystems function.” 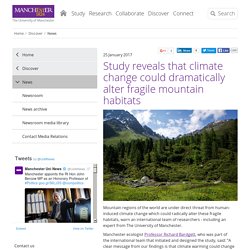 Rather than use short-term experiments, the research team used gradients of elevation in each mountain region spanning both above and below the alpine tree line. How Life Began: The Full Story. Plant Glossary All Plates. Glossary List | Previous Plate Plate 1: Stem and Root Types Plate 2: Leaf Composition, Parts, and Types Plate 3: Leaf Shapes. 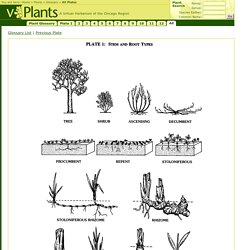 Caught in the act: New wasp species emerging. The concept that biodiversity feeds upon itself is an old idea, but it’s difficult to prove because it requires biologists to simultaneously catch several species red-handed just as they are becoming new species. 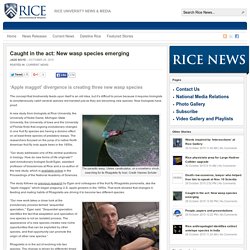 Now biologists have proof. The parasitic wasp, Utetes canaliculatus, on a snowberry shrub, searching for its Rhagoletis fly host. Ecologists predict impact of climate change on vulnerable species. If it seems like you're pulling more bass than trout out of Ontario's lakes this summer, you probably are. 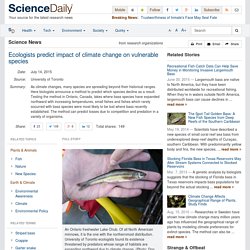 Blame it on the ripple effect of climate change and warming temperatures. Birds migrate earlier, flowers bloom faster, and fish move to newly warmed waters putting local species at risk. To mitigate the trend and support conservation efforts, scientists at the University of Toronto (U of T) are sharing a way to predict which plants or animals may be vulnerable to the arrival of a new species.

The researchers looked specifically at the impact of several species of bass, fish that prefer warm water and have expanded their range northward over the past 30 years as temperatures have increased. They looked at both historical and recent data for 30 different fish species in more than 1500 lakes throughout Ontario. If a dominant species can thrive in a warmer environment and wipe out other species, climate change could significantly reduce the diversity of species in our lakes as well.

Why Wolves Change Whole Ecosystems. George Monbiot explains that when wolves were reintroduced to Yellowstone National Park in the United States after being absent nearly 70 years, the most remarkable 'trophic cascade' occurred. 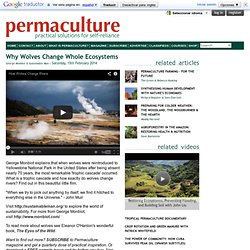 What is a trophic cascade and how exactly do wolves change rivers? Find out in this beautiful little film. "When we try to pick out anything by itself, we find it hitched to everything else in the Universe. " - John Muir. The Academic Jawa. The Shape of Life is a documentary mini-series which premiered on PBS in April 2002. This relatively obscure series pursues the modern ancestors of some of the world’s oldest and most amazing species, interviewing and following many experts of different scientific disciplines in the field and in the laboratory. Investigating the latest research from fields as divergent as genetics, paleontology and taxonomy, this series helps paint the newly emerging picture of evolution and the origins of animal life as we know it today. The series’ website lists eight different episodes but at the time I have only been able to locate the first seven, which are: Episode 1: Origins – This introduction to the series starts out with the quest for the first “true animal”.

Episode 2: Life on the Move – Moving on to the next logical step after the first animal, we are introduced to the first animals that moved. Why the mantis shrimp is my new favorite animal. American Crow, Life History. Crows don’t regularly visit feeders, but you can attract them to your backyard if you offer a mix of trees, open space, and food. 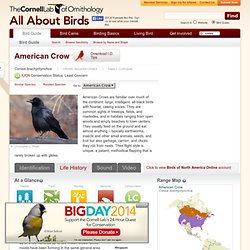 Peanuts left in an open place are a good attractant. Crows are also attracted by compost, garbage, or pet food that the birds can feed on. Remarkable new monkey discovered in remote Congo rainforest. Close up of new species: lesula (Cercopithecus lomamiensis). 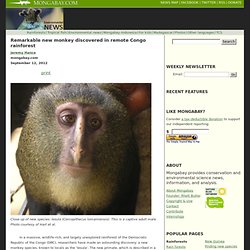 This is a captive adult male. Photo courtesy of Hart et al. Zoologger: The first solar-powered vertebrate - life - 18 January 2013. Zoologger is our weekly column highlighting extraordinary animals – and occasionally other organisms – from around the world Species: Ambystoma maculatumHabitat: Throughout the eastern USA and parts of southern Canada, leaving other salamanders green with envy When you think about it, animals are weird. 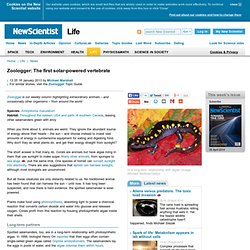 Related:  Why the mantis shrimp is my new favorite animal   -  Education   -  Enterprise