African Landforms – Landforms in Africa, Rivers of Africa, Mountain Ranges in Africa. Print this map Atlas Mountains: This mountain system runs from southwestern Morocco along the Mediterranean coastline to the eastern edge of Tunisia. 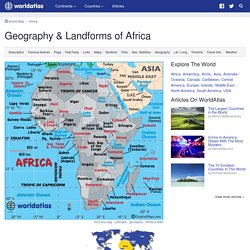 Several smaller ranges are included, namely the High Atlas, Middle Atlas and Maritime Atlas. The highest peak is Mt. Toubkal in western Morocco at 13,671 ft. (4,167 m). Congo River Basin: The Congo River Basin of central Africa dominates the landscape of the Democratic Republic of the Congo and much of neighboring Congo. Ethiopian Highlands: The Ethiopian Highlands are a rugged mass of mountains in Ethiopia, Eritrea (which is sometimes referred to as the Eritrean Highlands), and northern Somalia in the Horn of Africa. Great Rift Valley: A dramatic depression on the earth's surface, approximately 4,000 miles (6,400 km) in length, extends from the Red Sea area near Jordan in the Middle East, south to the African country of Mozambique.

Savanna Animal Printouts. Landforms of a Savanna. Savanna Biome - Facts and Information - The Portal of Life. Animals of the Savanna. Click to learn more about the Rhinoceros . African Savanna Herd Animals Rhinoceros live in groups of 3 or less and can weigh up to 500 pounds. They eat leaves and grass. They love to roll in the mud! Rhinos have very bad eyesight. Mor about the Cape Buffalo More about Giraffes . The cape buffalo is a dangerous animal that can weigh up to 350 pounds. Giraffes can grow up to 20 feet tall, with a neck that is 8 feet long. Grevy's zebra Elephant African Elephant. AFRICA - Explore the Regions - Savanna. When most non-Africans think of Africa, this is the region they picture. 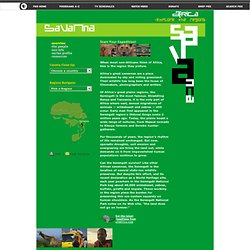 Africa's great savannas are a place dominated by sky and rolling grassland. Their wildlife has long been the focus of filmmakers, photographers and writers. Of Africa's great plains regions, the Serengeti is the most famous. Straddling Kenya and Tanzania, it is the only part of Africa where vast, annual migrations of animals -- wildebeest and zebras -- still occur. Early man first appeared in the Serengeti region's Olduvai Gorge some 2 million years ago. Savanna Biome - Facts and Information - The Portal of Life. Savanna Biome. The savanna, in lamenst terms, is a tropical grassland with some clumps of trees. The Savanna is charecterized by the wet and dry season, specific to the Savanna.

In the Savanna, despite the harsh "dry season", animals and plants prosper. Average Annual Rainfall- 59 in. Average Temperatures in the Dry Season- 93º Average Temperatures in the Wet Season- 61º PLANTS Wild grasses, generally tall and several clumps of trees. ANIMALS Animals, mainly herbivores, are generally large in size and have made adaptions to survive to this unique climate and food source. What is the Savanna Biome? - mobile wiseGEEK. Savanna (ecological region. Savanna Biome. The Savanna Biome is the largest Biome in southern Africa, occupying 46% of its area, and over one-third the area of South Africa. 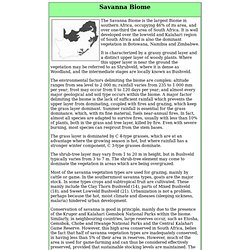 It is well developed over the lowveld and Kalahari region of South Africa and is also the dominant vegetation in Botswana, Namibia and Zimbabwe. It is characterized by a grassy ground layer and a distinct upper layer of woody plants. Where this upper layer is near the ground the vegetation may be referred to as Shrubveld, where it is dense as Woodland, and the intermediate stages are locally known as Bushveld.

The environmental factors delimiting the biome are complex: altitude ranges from sea level to 2 000 m; rainfall varies from 235 to 1 000 mm per year; frost may occur from 0 to 120 days per year; and almost every major geological and soil type occurs within the biome. Savanna. Typical tropical savanna in Northern Australia demonstrating the high tree density and regular spacing characteristic of many savannas. 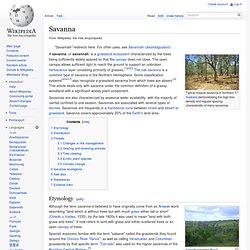 Savannas are also characterized by seasonal water availability, with the majority of rainfall confined to one season. Savannas are associated with several types of biomes. Savannas are frequently in a transitional zone between forest and desert or grassland. Savanna covers approximately 20% of the Earth's land area. Etymology[edit] Spanish explorers familiar with the term "sabana" called the grasslands they found around the Orinoco River "llanos", as well as calling Venezuelan and Colombian grasslands by that specific term. Distribution[edit] Many grassy landscapes and mixed communities of trees, shrubs, and grasses were described as savanna before the middle of the 19th century, when the concept of a tropical savanna climate became established.

"Barrens" has been used almost interchangeably with savanna in different parts of North America. Threats[edit] Savanna Biomes. A savanna is a rolling grassland scattered with shrubs and isolated trees, which can be found between a tropical rainforest and desert biome. 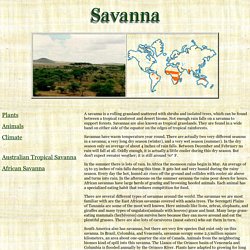 Not enough rain falls on a savanna to support forests. Savannas are also known as tropical grasslands. Blue Planet Biomes - World Biomes. What is a Biome?

A biome is a large geographical area of distinctive plant and animal groups, which are adapted to that particular environment. The climate and geography of a region determines what type of biome can exist in that region. Major biomes include deserts, forests, grasslands, tundra, and several types of aquatic environments.