Port Botany Lookout, Choi Ropiha Fighera. The Infinite Bridge by Gjøde & Povlsgaard Arkitekter. The Infinite Bridge is a sculpture by danish architect studio Gjøde & Povlsgaard Arkitekter built and exhibited in connection with the international biennale, Sculpture by the Sea 2015, that takes place in the scenic coastal landscape surrounding the city of Aarhus. 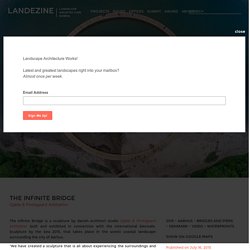 “We have created a sculpture that is all about experiencing the surroundings and becoming aware of the relation between the city and the magnificent landscape of the bay. Walking on the bridge you experience the changing landscape as an endless panoramic composition and at the same time you enter a space of social interaction with other people experiencing the same panorama,” says Johan Gjøde, partner and co-founder of Gjøde & Povlsgaard Arkitekter. The Infinite Bridge has a diameter of 60 meters and is positioned half on the beach and half in the sea. It consists of 60 identical wooden elements placed on steel pillars housed about two meters into the sea floor. Rio Arga Pedestrian Bridge by Peralta Ayesa. Baubotanik: The Botanically Inspired Design System that Creates Living Buildings.

Timber buildings are regularly praised for their sustainability, as carbon dioxide removed from the atmosphere by the trees remains locked in the structure of the building. 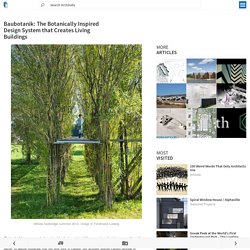 But what if you could go one better, to design buildings that not only lock in carbon, but actively absorb carbon dioxide to strengthen their structure? In this article, originally published by the International Federation of Landscape Architects as "Baubotanik: Botanically Inspired Biodesign," Ansel Oommen explores the theory and techniques of Baubotanik, a system of building with live trees that attempts to do just that. Trees are the tall, quiet guardians of our human narrative. 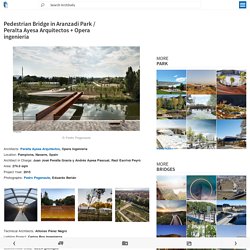 APEZETXEA ANAIAK S.L. - GOGOR S.A. From the architect. This project consists of, on the one hand, the construction of a pedestrian bridge to improve access between the park and the city and, on the other hand, the construction of some sheds, in the park’s fruit and vegetable garden area, to serve as storage spaces for the garden concessionaires. Quilotoa Shalalá Overlook / Jorge Javier Andrade Benítez + Javier Mera Luna + Daniel Moreno Flores. Roof & Mushrooms Pavilion / Ryue Nishizawa + Nendo. Architects: Ryue Nishizawa, Nendo Location: Kyoto University of Art and Design, 2-116 北白川瓜生山 Sakyo Ward, Kyoto, Kyoto Prefecture 606-8271, Japan Year: 2013 Photographs: Daici Ano From the architect. 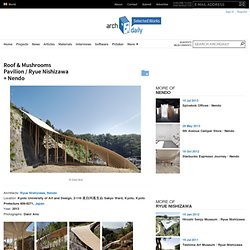 A small pavilion on the campus of Kyoto University of Art and Design, born from a collaboration between architect Ryue Nishizawa and design office nendo. The location: a steep hill face covered in luxurious vegetation. On a clear day, you can almost count the 36 crests of the hills that line Kyoto’s eastern edge. The adjacent area is earmarked for a new grove of Japanese plum trees, and their fragrant early spring blossoms will only add to an already beautiful site. Public Space in Gora Pulawska by 3XA. 3XA: Local authorities decided to transform an undeveloped piece of land in the center of Gora Pulawska into recreational space and meeting point for the village residents. 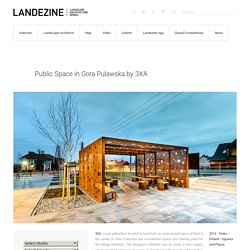 The designers’ intention was to create a new square, which would be unique to its users. It should serve them well and meet their needs in every possible way. Therefore, several different zones have been designed, each intended for either leisure or recreational purposes. There is an open area with numerous benches, meant for small gatherings or outdoor events. There are also covered arbours with tables and seats intended for the residents to integrate, and finally there are large platform benches, where one can sit back and spend time in larger groups. Maala Square / Iosu Gabilondo Altuna. Architects: Iosu Gabilondo Altuna Location: 20870 Elgoibar, Gipuzkoa, Spain Area: 875.0 sqm Project Year: 2015 Photographs: Aitor Ortiz. 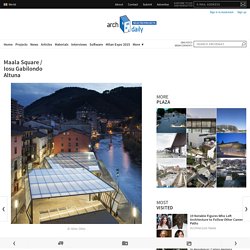 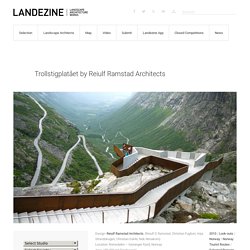 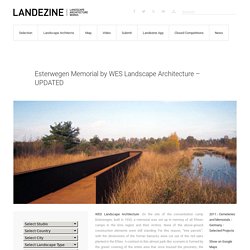 None of the above-ground construction elements were still standing. For this reason, “tree parcels”, with the dimensions of the former barracks were cut out of the red oaks planted in the fifties. River Place / Paul F. Hirzel. Architects: Paul F. 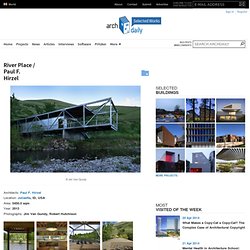 Hirzel Location: Juliaetta, ID, USA Area: 5450.0 sqm Year: 2013 Photographs: Jim Van Gundy, Robert Hutchison From the architect. At the end of a single lane road cut into a hillside, on a dry west-facing slope near Juliaetta, Idaho, the owners wanted to restore a pioneer vineyard (the first known vineyard in the canyon). Preserving the most ideal land for the vineyard, we located two structures – one above a flood plain, the other perched on a narrow basalt cliff overlooking a spawning pool on the Potlatch River.

The owner and guest quarters are housed in one structure and the other is used for special events such as wine tasting. The site presented a number of challenges: summer temperatures that can reach 110+degrees F, a healthy population of rattlesnakes and bull snakes, periodic river flooding (the flood plain site flooded twice during construction), and limited access for construction equipment. The building forms were derived from these circumstances.