Government By The People. Common Weal - Home. The-Common-Weal.pdf. Treasure Trove: Thinking Together Report 082013 by So Say Scotland. Scotland - The Heartbreak of a No Vote  The single most heart-breaking aspect of the Independence Referendum in Scotland, is to hear intelligent, thoughtful, worldly people list all the things that could be positive about a Yes vote only to tank it all with a hypothetical doubt and declare themselves a No. 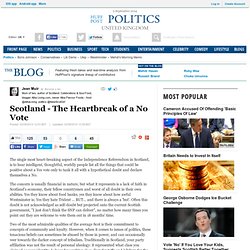 The concern is usually financial in nature, but what it represents is a lack of faith in Scotland's economy, their fellow countrymen and worst of all doubt in their own abilities. Yes they know about food banks; yes they know about how awful Westminster is; Yes they hate Trident ... BUT... and there is always a 'but'. Often this doubt is not acknowledged as self-doubt but projected onto the current Scottish government, "I just don't think the SNP can deliver", no matter how many times you point out they are welcome to vote them out in 18 months' time.

Tory Prime Minister Heath – It’s Scotland’s Oil – So The Money Is Theirs – Westminster – We Can’t Allow That They Will Seek Independence. 1972. 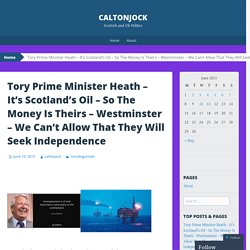 The discovery of oil in the North Sea revealed Prime Minister, Edward Heath concerns about Nationalist opinion and the poor state of the Scottish economy. Alert to opportunities for change he initiated a policy review. Now unionists want to drive Scotland from the union - FT.com. Back to the future with Scottish currency. ISRS Senior Research Fellow, Chris Cook discusses his framework for an independent Scotland to use the pound, a plan A Plus. 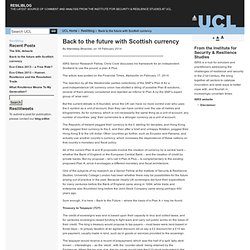 Bubonic plague tested off coast. Scotland was used as a testing ground for weapons containing bubonic plague, according to secret defence papers which have been made public. 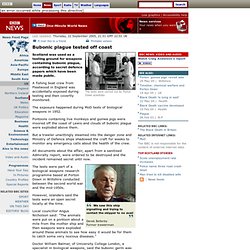 A fishing boat crew from Fleetwood in England was accidentally exposed during testing and then covertly monitored. The exposure happened during MoD tests of biological weapons in 1952. Pontoons containing live monkeys and guinea pigs were moored off the coast of Lewis and clouds of bubonic plague were exploded above them. Scotland's new sea to sea forest. Nicola Sturgeon says her email inbox is 'overflowing' with English people who want to vote SNP - UK Politics - UK - The Independent. Ms Sturgeon received widespread praise for her performance in Thursday’s seven-way leaders’ TV debates and her appearance seems to have driven requests for her party to expand into other parts of the UK. 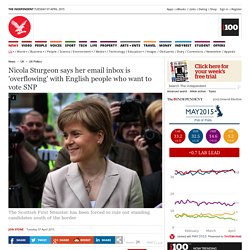 “I have … been really touched by the amazing feedback I've had since [the TV debate] - not just from people in Scotland, but from right across the UK,” she wrote in her column for Glasgow’s local Evening Times newspaper. “In fact, I've been overwhelmed by people in other parts of the UK saying that they wish they could vote SNP!” False Memos and French Farce. By Mike Small The British media is in dire need of some redemption this Easter, as print and broadcast outlets have ended up embarrassing themselves in their desperate urgency to smear Nicola Sturgeon and shape an election they see running out of their control. 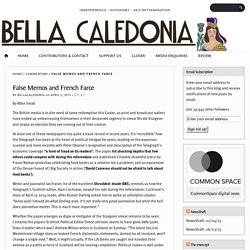 At least one of these newspapers has quite a track-record in recent years. It’s ‘incredible’ how the Telegraph has been at the heart of political intrigue for years, leading on the expenses scandal and more recently with Peter Oborne’s resignation and description of the Telegraph’s economic coverage “a form of fraud on its readers”. The paper hit shocking depths that few others could compete with during the referendum and published a frankly shameful piece by Fraser Nelson yesterday celebrating food banks as a solution not a problem, and an expression of the (lesser heard of) Big Society in action (‘David Cameron should not be afraid to talk about food banks’). That is indeed a crisis for our political elites. Like this: Scotland isn't different, it's Britain that's bizarre. Britain is in a state of self denial, sitting at the bottom of European league tables, but convinced it still rules the waves. 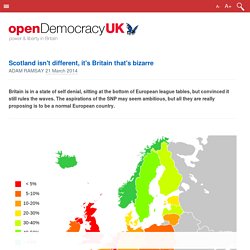 The aspirations of the SNP may seem ambitious, but all they are really proposing is to be a normal European country. Renewable energy use across the EU There is a trope I hear a lot at the moment: “Scotland is different”. Left to lie, on its own, with no explanation, it's a sort of petty nationalism. The idea that any one group of people is intrinsically unlike any other strikes me as a perverse way to understand humanity. The context, usually, is political. Across Northern Europe, university education is either free (in Germany and the Nordic countries) or costs only a few hundred Euros (in the Netherlands and France, for example). The Cheviot the Stag and the Black Black Oil (Complete) England: Construction Workers Discover Skull of William Wallace  London| A team of construction workers employed at demolishing an old pub last month in the Bermondsey district of the London borough of Southwark, have discovered an ancient and badly damaged wooden crate containing three pierced human skulls, presumably the severed heads of criminals or traitors that had been impaled on pikes and displayed at the southern gatehouse of the Old London Bridge. 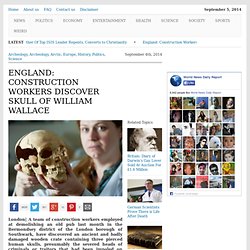