Westminster bans Scotland from global summit (From Herald Scotland) Westminster has barred the Scottish Government from joining a UK delegation to a vital international summit this month aimed at combating poverty, injustice, inequality and climate change. 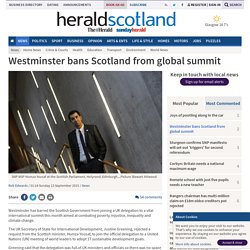 The UK Secretary of State for International Development, Justine Greening, rejected a request from the Scottish minister, Humza Yousaf, to join the official delegation to a United Nations (UN) meeting of world leaders to adopt 17 sustainable development goals. Greening said that the delegation was full of UK ministers and officials so there was no space for Yousaf - who responded by saying it was a “disgrace” that Scotland was being snubbed. The summit in New York on September 25-27 is expected to be attended by over 150 world leaders. Common Space - The game is “rigged”: Why Scotland has to escape the UK energy market to fulfil its green energy potential. Energy firm warns of power generation tax for being in Scotland as it abandons station plans (From Herald Scotland) SCOTTISHPOWER has abandoned plans to replace a coal-fired power station in East Lothian with a gas-fired alternative complaining a tax for being in Scotland is a key reason. 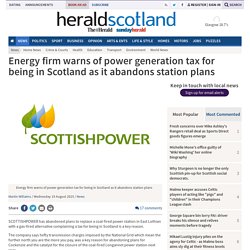 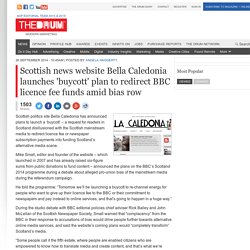 Mike Small, editor and founder of the website – which launched in 2007 and has already raised six-figure sums from public donations to fund content – announced the plans on the BBC’s Scotland 2014 programme during a debate about alleged pro-union bias of the mainstream media during the referendum campaign. He told the programme: “Tomorrow we’ll be launching a buycott to re-channel energy for people who want to give up their licence fee to the BBC or their commitment to newspapers and pay instead to online services, and that’s going to happen in a huge way.” Common Space - 100 days after the SNP tsunami: The highs and lows of Scotland’s new Westminster MPs.

Common Space - Michael Granados: What is so evil about Evel? Be careful what you wish for. The Tory who voted Yes. “In an independent Scotland, we’ll never have to worry about Tory governments again”, said the man on my doorstep, his YES badge gleaming in the sunshine. 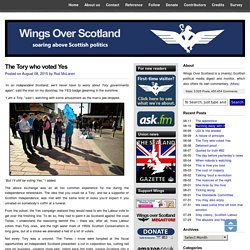 “I am a Tory,” said I, watching with some amusement as the man’s jaw dropped. “But I’ll still be voting Yes,” I added. Bella Caledonia "Who cares about the grassroots?" – John McTernan. As part of our #Indyref2project we’re highlighting the National Yes Registry, see more about it and support them here. 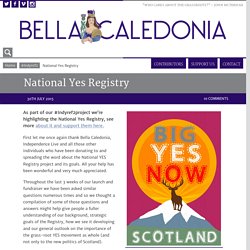 First let me once again thank Bella Caledonia, Independence Live and all those other individuals who have been donating to and spreading the word about the National YES Registry project and its goals. All your help has been wonderful and very much appreciated. Throughout the last 3 weeks of our launch and fundraiser we have been asked similar questions numerous times and so we thought a compilation of some of those questions and answers might help give people a fuller understanding of our background, strategic goals of the Registry, how we see it developing and our general outlook on the importance of the grass-root YES movement as whole (and not only to the new politics of Scotland).

We are now only five days from our Indiegogo fundraising deadline (11:59pm Saturday the 1st of August) and to date still just over 28% funded. Osborne aims to create a society that no-one alive has seen before. Macwhirter: Tracking Scotland's peaceful revolution - Newsnet.scot. Political commentator Iain Macwhirter has been in prolific mood in recent years. 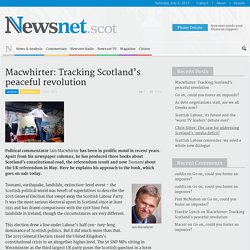 Apart from his newspaper columns, he has produced three books about Scotland’s constitutional road, the referendum result and now Tsunami about the UK referendum in May. Here he explains his approach to the book, which goes on sale today. Tsunami, earthquake, landslide, extinction-level event – the Scottish political world was bereft of superlatives to describe the 2015 General Election that swept away the Scottish Labour Party. It was the most serious electoral upset in Scotland since at least 1931 and has drawn comparisons with the 1918 Sinn Fein landslide in Ireland, though the circumstances are very different. This election drew a line under Labour’s half cen- tury-long dominance of Scottish politics.

Only twenty years ago, a result like this would have been regarded by the SNP, and probably by Westminster, as a mandate for independence. Smith and the Subsidy Myth Makers. By Jim and Margaret Cuthbert The following is a letter we have today sent to the Director General of the BBC. 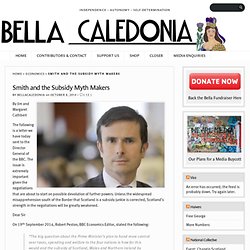 The issue is extremely important given the negotiations that are about to start on possible devolution of further powers. Unless the widespread misapprehension south of the Border that Scotland is a subsidy junkie is corrected, Scotland’s strength in the negotiations will be greatly weakened. Dear Sir On 19th September 2014, Robert Peston, BBC Economics Editor, stated the following: Bill Glen - Photos de la publication de Bill Glen dans... Tossing your chips. Over and over again in the years leading up to the independence referendum, Scots were warned of the many dire consequences of voting Yes. 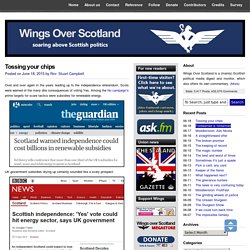 Among the No campaign’s prime targets for scare tactics were subsidies for renewable energy. UK government subsidies drying up certainly sounded like a scary prospect. The Tory Veto: Scotland Bill falls short in every way. SCOTLAND’S only Tory MP will be able to veto decisions made by the Scottish Parliament. 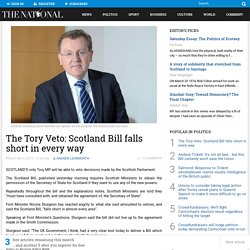 The Scotland Bill, published yesterday morning requires Scottish Ministers to obtain the permission of the Secretary of State for Scotland if they want to use any of the new powers. Repeatedly throughout the bill and the explanatory notes, Scottish Ministers are told they “must have consulted with, and obtained the agreement of, the Secretary of State”. First Minister Nicola Sturgeon has reacted angrily to what she said amounted to vetoes, and said the Scotland Bill, “falls short in almost every area”. Speaking at First Minister’s Questions, Sturgeon said the bill did not live up to the agreement made in the Smith Commission. Sturgeon said: “The UK Government, I think, had a very clear test today to deliver a Bill which lived up in full, in spirit and in letter, to the Smith Commission.

Irvine Welsh: this glorious failure could yet be Scotland's finest hour. They came out in their droves, in a last-ditch, stoic defence of the union, to staunch the seemingly irresistible tide towards independence. 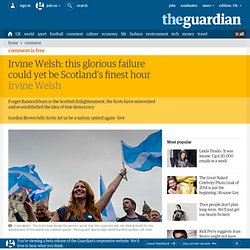 The no voters should take a bow: they delivered the UK establishment a reprieve the enervated, confused and weak campaign of their masters certainly didn't deserve. They have bought time for the union, and many of them, people who will habitually support the status quo at almost any cost, will simply be relieved. Michael Fallon overrules First Sea Lord over Scottish shipyards. Barely worth the words. This: And this: And of course this: And then, with crushing inevitability, this: All on you, No voters. YOU go to Govan and explain it to them. A Conversation with Blair Jenkins. Grumpy Scottish Man. I often get told by NO voters that I need to get over it; I need to move on, accept that I lost the referendum and stop being a bitter nationalist. This cheers me up no end as it demonstrates that we are as correct now as we were correct then.

No matter how many times I explain to NO voters that I am not a nationalist, that even though many vote SNP they are not nationalists either, that many non nationalists have joined the party. That it is not about nationalism for many of us, it is about change and the SNP is a means to that change they still don’t get it. I’m getting fed up with this. It’s easy to see why this might be seen as an inflammatory gesture (ho ho). Just seven weeks after 1.6 million people had their hearts utterly broken, East Sussex City Council saw fit to promote an effigy of the democratically elected First Minister of the Scots, brandishing a 45% spoon, wearing a Yes badge, and accompanied by Nessie wearing a Tam O’Shanter.

Which is to be incinerated in a mass conflagration in Lewes. (UPDATE: not this one! See updates below) Three experts back oil and gas taxes being devolved to Holyrood control – Scottish Statesman – Scottish News, Opinion & Comment. Three experts, including an Oxford professor, have backed the SNP’s claims that there should be no problems with devolving oil taxes to Holyrood control. Iain McLean, Professor of Politics at the University of Oxford, described the Scottish Government controlling North Sea tax as “perfectly feasible as well as desirable” adding it would “make sense” for the licensing regime to be devolved along with tax. Professor McLean’s comments follow similar backing from the Chartered Institute of Taxation (CIT) and the Institute of Chartered Accountants (ICA).

Giving evidence to the Treasury Select Committee at Westminster last week, CIT tax policy director Patrick Stevens described Petroleum Tax Revenue (PRT) as a “good candidate” for devolution. At the same session, Frank Haskew, head of tax at the ICA in England and Wales agreed PRT “should be looked at in terms of devolution”. Devolving oil tax 'feasible as well as desirable' SNP Membership Now at 100,000 Members!  Our man on the scene. Was this the real reason Cameron allowed the Scotland referendum? Misjudged: It seems David Cameron has found a way to impose even MORE “bloody imperialism” – the worst excesses of his neoliberal agenda – on us all, using English voters as his weapon [Image: Ceasefire Magazine].

Nicola Sturgeon parks independence and opts for devolution: five reasons why she is right. Nicola Sturgeon is about to oversee a historic shift in the Scottish National party’s positioning on independence. Special Report: Scottish Referendum Rigged - The 'How' and the 'Why' Let's turn Brown's petition back on him. Tuesday, 30 September 2014 21:18. My Head Hurts / Lord Smith seeks views of groups on both sides of independence campaign. What now for 'the vow'? 1 October 2014Last updated at 08:22 ET By James Cook Scotland Correspondent, BBC News David Cameron, Nick Clegg and Ed Miliband all pledged support for more powers for Scotland. Is the campaign for Scottish independence over? Scottish Police Investigate Referendum Fraud After 'Hundreds of Uncounted Yes Votes' Found. By ourselves, then. 14 Lessons from the Scottish Referendum. The Case for Scotland Making a Unilateral Declaration of Independence in May 2015?

Voter registration row over threat of £80 fine. Which Westminster seats can the SNP realistically win? Nuclear weapons deal with US renewed in secret, UK confirms. Yes voters 'heartbroken' over Westminster 'snub' Could the SNP win 25 Labour seats in 2015? An explosive breach of the rules: Salmond blasts Treasury as its BBC email is exposed.