Using tech in the classroom

A New Understanding of the Digital Divide. As an urban teacher whose students are often lacking access to a computer and the Internet at home, I have strong opinions and experiences with the digital divide. 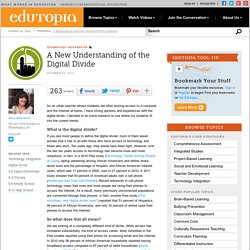 I decided to do some research to see where my students fit into the current trends. What is the digital divide? If you ask most people to define the digital divide, most of them would answer that it has to do with those who have access to technology and those who don't. Ten years ago, they would have been right. However, over the last ten years access to technology has become more and more ubiquitous.

So what does this all mean? We are looking at a completely different kind of divide. Another group that is often left out of the conversation are Americans with disabilities. Most of the reports about the digital divide center around racial and socio-economic differences (a 2010 study confirmed that household income is the greatest predictor of Internet use). Rural Schools In America Fight To Bridge Digital Divide. This piece comes to us courtesy of The Hechinger Report. 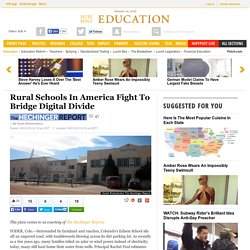 YODER, Colo. —Surrounded by farmland and ranches, Colorado's Edison School sits off an unpaved road, with tumbleweeds blowing across its dirt parking lot. As recently as a few years ago, many families relied on solar or wind power instead of electricity; today, many still haul home their water from wells. Principal Rachel Paul estimates that 25 to 30 percent of her students don't have Internet access at home. Yet at Edison—where about three-quarters of the 120 K-12 students are eligible for free- or reduced-priced lunch—there are as many computers as there are students. Frank and administrators in the two-school district, located an hour east of Colorado Springs in Yoder, Colo., have big technological ambitions.

Reaching Rural Schools: Technology Makes Learning Possible No Matter the Zip Code. The one-room schoolhouse has become a quaint symbol of our country’s pioneer past. 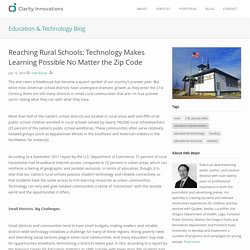 But while most American school districts have undergone dramatic growth as they enter the 21st Century, there are still many districts in small rural communities that are—in true pioneer spirit—doing what they can with what they have. More than half of the nation’s school districts are located in rural areas with one-fifth of all public school children enrolled in rural schools served by nearly 740,000 rural schoolteachers (23 percent of the nation’s public school workforce). These communities often serve relatively isolated groups (such as Appalachian Whites in the Southeast and American Indians in the Northwest, for instance).

According to a November 2011 report by the U.S. Department of Commerce, 57 percent of rural households had broadband Internet access, compared to 72 percent in urban areas, which can reinforce a feeling of geographic and societal seclusion. Small Districts. The Use and Abuse of Technology in the Classroom. This article was also posted on the kinderchat blog. 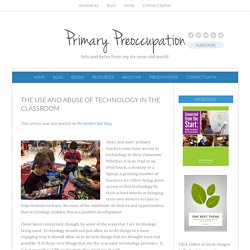 More and more primary teachers now have access to technology in their classroom. Whether it is an iPad or an iPod touch, a desktop or a laptop, a growing number of teachers are either being given access to this technology by their school boards or bringing their own devices to class to help students to learn. Because of the multitude of choices and opportunities that technology enables, this is a positive development. 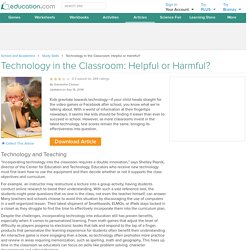 With a world of information at their fingertips nowadays, it seems like kids should be finding it easier than ever to succeed in school. However, as more classrooms invest in the latest technology, test scores remain the same, bringing its effectiveness into question. Technology and Teaching “Incorporating technology into the classroom requires a double innovation,” says Shelley Pasnik, director of the Center for Education and Technology, Educators who receive new technology must first learn how to use the equipment and then decide whether or not it supports the class objectives and curriculum. For example, an instructor may restructure a lecture into a group activity, having students conduct online research to boost their understanding. Technology also makes it easier to spend more overall time on learning. Blended Learning: Making it Work in Your Classroom.

Kristin: I can say that the things I've been doing the last two years have really made a difference, because my kids have scored the highest in the State on the standardized tests. 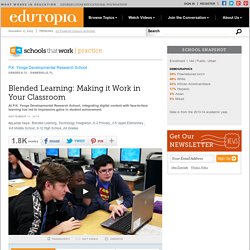 So what we're doing here is working, and it's helping them be successful. Julie: We define Blended Learning as the combination of digital content and activity with face-to-face content and activity. It sounds easy to Blend, but it really, it looks very different in every classroom. So if a teacher is using something that works really well in a face-to-face situation, they should continue to do that because it works well. If they can find something else that works better, is more efficient or more effective that's digital, then that would be implemented. Kristin: What I have online could be completely different than what the biology teacher has online, or what the physical education teacher has online.

Mickey: Okay, go ahead get the laptops. There are three activities. Student: C.