ER0041CP. MLIP1613 0002. Free trade zones - Doing Business in China. The UK is cooperating closely with the Chinese authorities on the development of Free Trade Zones (FTZs) in Shanghai, Fujian, Tianjin and Guangzhou. 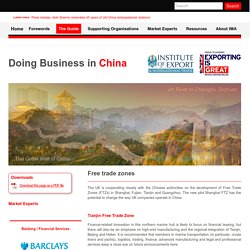 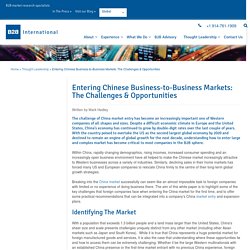 Despite a difficult economic climate in Europe and the United States, China’s economy has continued to grow by double-digit rates over the last couple of years. With the country poised to overtake the US as the second largest global economy by 2020 and destined to remain an engine of global growth for the next decade, understanding how to enter large and complex market has become critical to most companies in the B2B sphere.

Within China, rapidly changing demographics, rising incomes, increased consumer spending and an increasingly open business environment have all helped to make the Chinese market increasingly attractive to Western businesses across a variety of industries. Similarly, declining sales in their home markets has forced many US and European companies to relocate China firmly to the centre of their long-term global growth strategies. China Market Entry Strategies. Spending soars in china. Style and influence. The future of fashion. Bricks and mortar revolution. Chinese menswear market. LSN : Behaviours : Bricks-and-mortar revolution. LSN : Behaviours : The future of fashion. 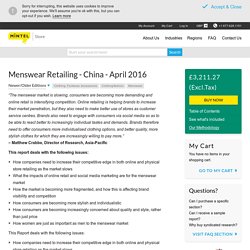 4 Things You Should Know About the Menswear Market Right Now. On Thursday, Womenswear Daily mixed things up by holding a — wait for it — menswear conference. 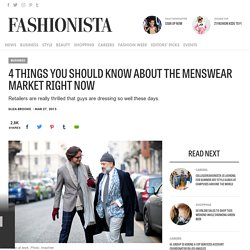 The event, held on the Upper East Side of Manhattan, drew designers like Todd Snyder and Stuart Vevers of Coach, retailers like Saks Fifth Avenue and newcomers from the startup world like Frank & Oak. With New York Fashion Week: Men's coming our way in July, there's no better time to study up on the menswear market. Here are four things we learned from the panelists and speakers at WWD's event. 1. Men will pay more for products than retailers are currently charging. 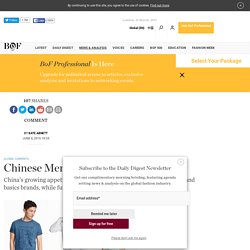 The chief culprits? Declining sales of menswear, watches and leather goods, according to Bain & Company. For luxury menswear purveyors like Zegna, Dunhill and Hugo Boss, all of which moved into China in the ‘90s and rely on the region for a significant part of their businesses, this is bad news. Last year, Zegna’s sales in China — the company’s largest market — fell 5 percent, while Hugo Boss’s China sales fell 2 percent in local currency, dragged down by poor menswear sales, which declined by a double-digit rate for the second consecutive year. However, there are a few bright spots in China’s menswear market, which was worth CNY492 billion ($74.9. billion) in 2015 and is predicted to reach CNY585 billion ($89 billion) by 2020, according to Euromonitor. Zara menswear | Source: Zara For formalwear labels, the picture is more complicated.

The Menswear market is booming in China - Fashion China. Menswear in China. New Report Guarantee If you purchase a report that is updated in the next 60 days, we will send you the new edition and data extract FREE! 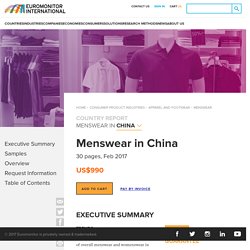 Menswear accounted for a 37% value share of overall menswear and womenswear in 2016, and saw slower value growth than womenswear in this year. Compared with womenswear, menswear has fewer varieties, with few men closely following international fashion trends, leading to less frequent purchases. Moreover, the government’s anti-corruption campaign severely dampened the growth of high-end menswear in 2016, in addition to the overall economic slowdown in China. Besides, to boost sales some manufacturers provided special offers and discounted prices, resulting in reduced profits and decelerating value growth. Mintel Menswear 2016: men are shopping more, prefer sportswear to suits and are quality and tech driven - The Industry London.

Menswear growth is outstripping womenswear, more young men are shopping for themselves in-store than young women, sportswear is more appealing than suits, quality and innovation matter to men, and there is great opportunity in the plus-size and over-45s market. 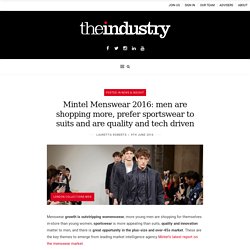 These are the key themes to emerge from leading market intelligence agency Mintel’s latest report on the menswear market. Key statistics from the report have been released ahead of the official kick off of London Collections Men tomorrow (10 June). Growth of menswear market outpaces womenswear: In 2015, the men’s clothing market grew by 4.1% to reach £14.1 billion, up from £11.4bn in 2010. New Look embarks on major menswear push as China expansion ramps up. High Street fashion chain New Look said it plans a major push into menswear this year after poaching Christopher Englinde from rival H&M. 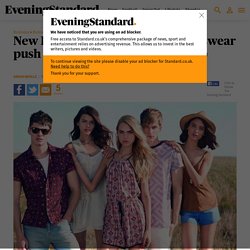 The news comes as the company revealed a boost in sales and chief executive Anders Kristiansen said its expansion into China is moving faster than expected. He said: “I’m very bullish about the future. If you look at China, we had 19 stores by the end of March. By the end of May we have 30 stores and we’ve got another 40 in the pipeline. New Look to focus on menswear stores and China as revenue grows under new ownership. The fashion retailer was bought by South African private equity group Brait for £780m, which resulted in it receiving a valuation of £1.9bn. 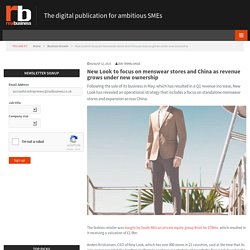 Anders Kristiansen, CEO of New Look, which has over 800 stores in 21 countries, said at the time that its new owner provided the “perfect platform to continue our strategy of growth the New Look brand in the UK, Europe and China”. - Advertisement - Loaded: 0% Progress: 0% With the deal revealed in the middle of the company’s first quarter, New Look has said its revenue rose by 4.3 per cent in the period to reach £369.8m, while UK sales grew by 4.1 per cent.

The web was a solid channel for sales as its own website experienced a 38.7 per cent trading growth, while third party online transactions grew by 27 per cent. Read more on the fashion industry: Menswear sales and Chinese expansion boost first half for New Look. Like-for-like sales in the UK - which strip out the impact of new stores opened during the year - rose by 4.7pc. 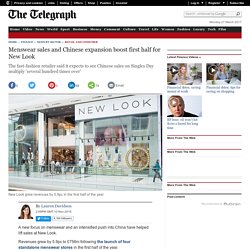 Mr Kristiansen also reported "successful progress" in China and said that he was "very optimistic" about New Look's future in the country, where the retailer has 52 stores and plans to open a further 33 by March. He added that lower cost fast-fashion retailers were likely to be more resilient to the country's economic woes than high-end brands, which are struggling in the world's second biggest economy. "Most retailers find it really hard to crack into the Chinese market, but we value fashion.

There aren't really any other value-brand fashion retailers in China today. "We sell jumpers for £10, not luxury bags for £2,000. New Look to ramp up China expansion amid 'appetite for British fashion' New Look is to step up the pace of store openings in China under its new owner Brait, the investment company controlled by South African tycoon Christo Wiese. The fashion chain intends to open 80 stores this year, compared with the 60 previously planned, and the vast majority of those will be in China. New Look to open 20 menswear stores as expansion gathers pace. New Look plans to open up to 20 menswear stores next year as investment from the South African tycoon Christo Wiese helps the British fashion retailer increase the pace of expansion.