What Made Lisp Different. December 2001 (rev. 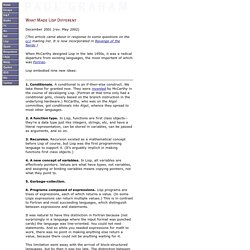 May 2002) (This article came about in response to some questions on the LL1 mailing list. It is now incorporated in Revenge of the Nerds.) When McCarthy designed Lisp in the late 1950s, it was a radical departure from existing languages, the most important of which was Fortran. Twitter. "Programming Algorithms" Book. Drago — a nice example of a real-world binary tree I'm writing a book about algorithms and Lisp. 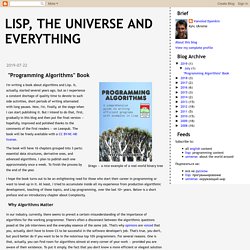 It, actually, started several years ago, but as I experience a constant shortage of quality time to devote to such side activities, short periods of writing alternated with long pauses. Now, I'm, finally, at the stage when I can start publishing it. But I intend to do that, first, gradually in this blog and then put the final version — hopefully, improved and polished thanks to the comments of the first readers — on Leanpub. The book will be freely available with a CC BY-NC-ND license. The book will have 16 chapters grouped into 3 parts: essential data structures, derivative ones, and advanced algorithms. I hope the book turns out to be an enlightening read for those who start their career in programming or want to level up in it. Why Algorithms Matter In our industry, currently, there seems to prevail a certain misunderstanding of the importance of algorithms for the working programmer. 1.

CHIP-8 in Common Lisp: Graphics. In the previous post we looked at how to emulate a CHIP-8 CPU with Common Lisp. 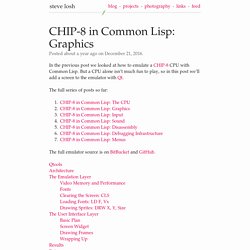 But a CPU alone isn’t much fun to play, so in this post we’ll add a screen to the emulator with Qt. Functional programming - Why should I learn Lisp? Lisp. Yet another REPL rebel, who needs -and so gets - no introduction … Mr @bhauman… Let's Run Lisp on a Microcontroller #Lisp #scheme #dfscheme. Wiki: rcsim. One of the oldest - but still largely unknown - pieces in the PicoLisp distribution is a little flight simulator. 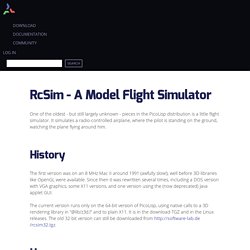 It simulates a radio-controlled airplane, where the pilot is standing on the ground, watching the plane flying around him. History The first version was on an 8 MHz Mac II around 1991 (awfully slow!) , well before 3D-libraries like OpenGL were available. Since then it was rewritten several times, including a DOS version with VGA graphics, some X11 versions, and one version using the (now deprecated) Java applet GUI. The current version runs only on the 64-bit version of PicoLisp, using native calls to a 3D rendering library in "@lib/z3d.l" and to plain X11. Usage The plane is similar to the German World War I fighter biplane Fokker D-VII (and a bit to the British Sopwith Camel). It can be started in a terminal as e.g. McCLIM – A powerful GUI toolkit for Common Lisp. Franz Inc: Introduction to Lisp. We would like to suggest that you first start by downloading the Free Express Edition of Allegro CL. 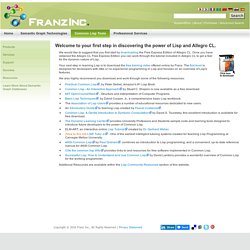 Once you have obtained the Allegro CL Free Express Edition you can work through the tutorial included in Allegro CL to get a feel for the dynamic nature of Lisp. Your next step in learning Lisp is to download the free training video offered online by Franz. The first level is designed for developers with little or no experience programming in Lisp and focuses on an overview of Lisp's features. We also highly recommend you download and work through some of the following resources: Clear View Training. Programming Digressions. Languages for the effective, daily practice of the software craft nowadays, I would point to Java and Scala as being absolutely indispensable. 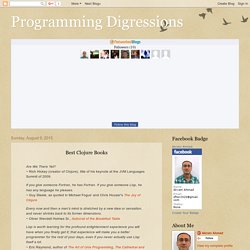 At the same time, it's undeniably helpful to have in one's toolbox—programming models, if you will—tools from programming paradigms. I say so because I know full well the inevitability of the need to wield tools from whichever programming paradigm is up to snuff for slaying a particular, wicked problems. Free Lisp Books. Let Over Lambda. Implementing Lisp. I'm interested in a sketch of the accumulated wisdom about ImplementingLisp. 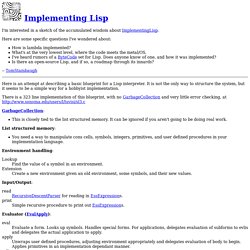 Here are some specific questions I've wondered about: How is lambda implemented? What's at the very lowest level, where the code meets the metal/OS. Lisp as the Maxwell’s equations of software. On my first day of physics graduate school, the professor in my class on electromagnetism began by stepping to the board, and wordlessly writing four equations: He stepped back, turned around, and said something like [1]: “These are Maxwell’s equations. 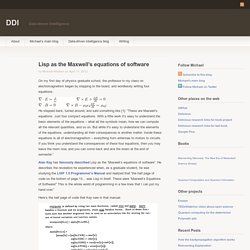 Just four compact equations. With a little work it’s easy to understand the basic elements of the equations – what all the symbols mean, how we can compute all the relevant quantities, and so on. But while it’s easy to understand the elements of the equations, understanding all their consequences is another matter. Inside these equations is all of electromagnetism – everything from antennas to motors to circuits. Alan Kay has famously described Lisp as the “Maxwell’s equations of software”. Here’s the half page of code that Kay saw in that manual: What we’re going to do in this essay is understand what that half page of code means, and what it means that Lisp is the Maxwell’s equations of software. Quicklisp beta. Quicklisp is a library manager for Common Lisp. 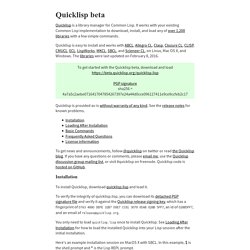 It works with your existing Common Lisp implementation to download, install, and load any of over 1,200 libraries with a few simple commands. Quicklisp is easy to install and works with ABCL, Allegro CL, Clasp, Clozure CL, CLISP, CMUCL, ECL, LispWorks, MKCL, SBCL, and Scieneer CL, on Linux, Mac OS X, and Windows. The libraries were last updated on February 8, 2016. To get started with the Quicklisp beta, download and load PGP signaturesha256 = 4a7a5c2aebe0716417047854267397e24a44d0cce096127411e9ce9ccfeb2c17 Quicklisp is provided as-is without warranty of any kind. To get news and announcements, follow @quicklisp on twitter or read the Quicklisp blog. Installation. Setting up Common Lisp on Windows 7. 1. 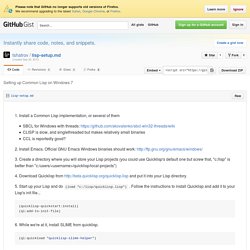 Install a Common Lisp implementation, or several of them SBCL for Windows with threads: is slow, and singlethreaded but makes relatively small binariesCCL is reportedly good? 2. Install Emacs. Is not available. Paul Graham. Utx. Onlisp. Acl2. Build Your Own Lisp. Chapter 1 • Introduction About Who this is for Why learn C How to learn C Why build a Lisp Your own Lisp Chapter 2 • Installation Setup Text Editor Compiler Hello World Compilation Errors Documentation Chapter 3 • Basics Overview Programs Variables Function Declarations Structure Declarations Pointers Strings Conditionals Loops Chapter 4 • An Interactive Prompt.

Why monads have not taken the Common Lisp world by storm. Topics: monads, Common Lisp, functional programming Author: Marijn Haverbeke Date: July 11th 2008 Today I was trying write a parser for a reasonably complicated language. Since I do not tend to learn from other people's work or even from my own past mistakes, and tend to greatly underestimate the complexity of tasks (or overestimate my own skills) this went something like this: Try to quickly write the whole thing as a single recursive descent parser. Note the exploding amount of ugliness. Give up. LISP and Common LISP Programming. Clcon - emerging Common Lisp IDE. Hi! I have started a new attempt on Common Lisp IDE, it is named clcon.

See screenshots at Goal is a cross-platform Common Lisp IDE with more "modern" look and feel, under permissive license. It is intended first of all for beginners. Also it can be used as a GUI for using CL as a scripting language. IDE is built as a client/server application. On server side, SWANK server on SBCL is responsible for most of the work. Budden / clcon / wiki / Screenshots. Stepper with Visual Studio-like keybindings. Why I love Lisp. Topic: lang/lisp/ Topic: lang/lisp/impl/