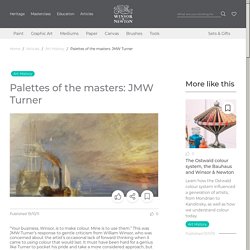 Mine is to use them.” This was JMW Turner’s response to gentle criticism from William Winsor, who was concerned about the artist’s occasional lack of forward thinking when it came to using colour that would last. It must have been hard for a genius like Turner to pocket his pride and take a more considered approach, but Winsor’s point is as valid now as it was then: for the work of an artist to last, they need to choose colour that will stand the test of time. This simple message remains one of the fundamental aspects of the work of Winsor & Newton today. Recognition from an early age Joseph Mallord William Turner began his career at the age of 11, copying architectural drawings, colouring antiquarian engravings and painting landscapes in watercolour.

A taste for experimentation. Venice from the Lagoon, by Turner by Turner, Joseph Mallord William at Fitzwilliam Museum Prints. Erotica and Improvisations c.1834-6 (J.M.W. Turner: Sketchbooks, Drawings and Watercolours) Jmw turner alnwick castle. ‘View of Rome from the Gardens of the Villa Barberini’, Joseph Mallord William Turner, 1819. As John Ruskin first correctly identified, Turner’s location for this view of Rome was the Villa Barberini (also known as the Villa Barberini al Gianicolo), a small Baroque casino situated north of the Janiculum Hill, to the immediate south of St Peter’s and the Vatican. 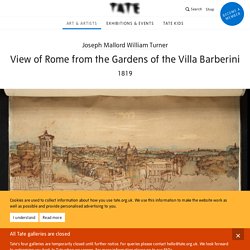 Originally owned by Taddeo Barberini, nephew of Pope Urban VIII, the building was largely destroyed during the siege of Rome in 1849,1 but its appearance is partially recorded in an eighteenth-century engraving by Giuseppe Vasi (1710–1782).2 Two small pavilions, the Casino della Palma, and the Palazetto Vercelli survived and are today part of a larger complex owned by the Jesuits and the Collegio di Propoganda Fide. During the nineteenth century, the Villa Barberini was set within terraced gardens which offered spectacular views across the city. 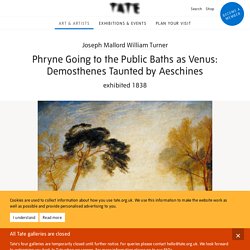 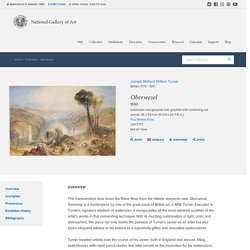 M.W. Turner. Executed in Turner's signature medium of watercolor, it encapsulates all the most admired qualities of the artist's works in that demanding technique. With its dazzling combination of light, color, and atmosphere, this piece not only marks the pinnacle of Turner's career as an artist but also bears eloquent witness to his stature as a supremely gifted and innovative watercolorist. Turner traveled widely over the course of his career, both in England and abroad, filling sketchbooks with rapid pencil studies that later served as the inspiration for his watercolors.

At rare J.M.W. Turner show, the watercolors are as fragile as they are many. #Turner dans la #collectionCourtauld. Tina sur Twitter : ""Turner was an unlikely candidate to become Britain's greatest painter. He was awkward, short tempered and often difficult to deal with. He never lost his strong working class accent. People attending his lectures had little idea what. J.M.W. Turner: Watercolors from TATE [Opens October 5, 2019] Early Turner landscape Walton Bridges saved for the nation. An early landscape by JMW Turner, thought to be the first painted by the artist in the open air, has been saved for the nation with the help of £2.1m of lottery money. 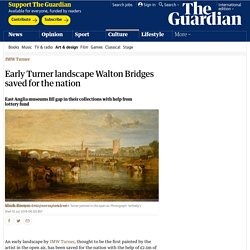 Turner’s Walton Bridges was the subject of a temporary export bar preventing it from leaving the UK after it was sold at auction for £3.4m. A campaign was launched by museums in East Anglia to raise the money to match the auction price. On Tuesday, its success was announced. Although the painting is a scene of the Thames in Surrey, Norfolk was keen to get the painting because there are no Turners in east of England collections. It fills a gap and will complement holdings of important landscapes by painters such as John Constable, Thomas Gainsborough and Norwich School artists including John Sell Cotman and John Crome, for whom Turner was an important influence. She said she hoped the presence of a “Turner for the east” would encourage complementary loans, “enriching the cultural life of East Anglia for decades to come”.

‘Milan to Venice Sketchbook’, Joseph Mallord William Turner, 1819. Jmw turner milan - Recherche Google. Journal of Art in Society sur Twitter : "JMW Turner’s 1810 oil painting of a cobbled High Street, Oxford, looking west, with University College at L, All Souls at R, strolling scholars & some women “for the sake of colour” (Ashmolean) ■ & a remarkably sim. Tina sur Twitter : "The painting shows the Archangel Michael (angel of the Apocalypse) appearing on the Day of Judgement with his flaming sword. In the foreground are Old Testament scenes of murder and betrayal (Adam and Eve weeps over the body of Abel-le. "Between now and now,  between I am and you are,  the word bridge Entering it  you enter yourself:  the world connects  and closes like a ring.  From one bank to another,  there is always  a body stretched:  a rainbow... 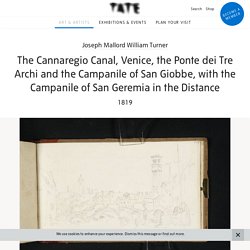 Bell annotated Finberg’s 1909 Inventory entry (‘View on the Cannaregio with “San Giobbe” on the right’): ‘Ponte dei Tre Archi’.1 Bell similarly annotated the entry in Finberg’s 1930 In Venice with Turner.2 Looking south-east, the Ponte dei Tre Archi is seen beside the campanile of the nearby church of San Giobbe, with the campanile of San Geremia, a church on the Grand Canal, in the distance towards the left. Finberg noted that this view and a few others on adjacent pages around the north-western end of the Grand Canal ‘complete Turner’s studies of this part of Venice’.3. 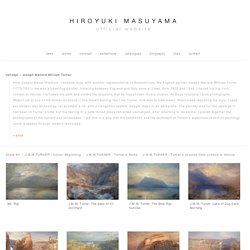 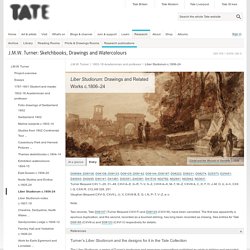 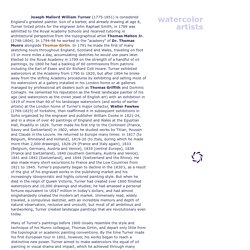 Son of a barber, and already drawing at age 8, Turner tinted prints for the engraver John Raphael Smith, in 1789 was admitted to the Royal Academy Schools and received tutoring in architectural perspective from the topographical artist Thomas Malton Jr. (1748-1804). In 1794-98 he worked in the "academy" of Dr. Thomas Munro alongside Thomas Girtin. In 1791 he made the first of many sketching tours throughout England, Scotland and Wales, traveling on foot 15 or more miles a day, accumulating sketches he would use years later. Elected to the Royal Academy in 1799 on the strength of a handful of oil paintings, by 1800 he had a backlog of 60 commissions from patrons including the Earl of Essex and Sir Richard Colt Hoare. Turner as Draughtsman - Andrew Wilton, Joseph Mallord William Turner. Turner as Draughtsman - Andrew Wilton, Joseph Mallord William Turner.

The 1795 Wales and Isle of Wight Tours and Related Works c.1795-1800 (J.M.W. Turner: Sketchbooks, Drawings and Watercolours) Turner Watercolour Painting papers. J M W Turner (1775- 1851) was passionate about the papers which he used. 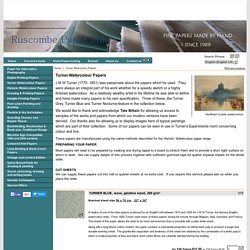 They were always an integral part of his work whether for a speedy sketch or a highly finished watercolour. As a relatively wealthy artist in his lifetime he was able to define and have made many papers to his own specification. Three of these, the Turner Grey, Turner Blue and Turner Nocturne feature in the collection below. We would like to thank and acknowledge Tate Britain for allowing us access to samples of the works and papers from which our modern versions have been derived.

Our thanks also for allowing us to display images here of typical paintings which are part of their collection. These papers are manufactured using the same methods described for the Historic Watercolour paper range. Most papers will need to be prepared by soaking and drying taped to a board to stretch them and to provide a drum tight surface on which to work. We can supply these papers cut into half or quarter sheets at no extra cost.

Turner, joseph mallord william the. This unusually fresh watercolor, which is one of Turner’s most magnificent and celebrated late Swiss watercolors, was probably executed in 1843. Turner has positioned himself on Lake Lauerzersee, in the Canton of Schwyz, twenty-two kilometers east of Lucerne. It is early evening and moonlight illuminates the sublime mountain landscape and makes watery reflections on the glassy surface of the lake below. He looks to the south-east towards the monumental twin peaks of the Lesser and Great Mythens. Hand Theory Martin Butlin JMW Turner in Germany Cecilia Powell. Cecilia Powell John Gage Eric Shanes Discovery JMW Turner from James Orrock collection Turner expertiseCecilia Powell John Gage JMW Turner the source: the "Hand" of deception Orrock Ehrenbrietstein on a marbled book-board signed and dated, JMW Turner R.A. 1817 (10 X 12 inches) Art World’s Dirty Little Secretr malcolm setters graham setters.

Son of a barber, and already drawing at age 8, Turner tinted prints for the engraver John Raphael Smith, in 1789 was admitted to the Royal Academy Schools and received tutoring in architectural perspective from the topographical artist Thomas Malton Jr. (1748-1804). In 1794-98 he worked in the "academy" of Dr. Thomas Munro alongside Thomas Girtin. In 1791 he made the first of many sketching tours throughout England, Scotland and Wales, traveling on foot 15 or more miles a day, accumulating sketches he would use years later.

Elected to the Royal Academy in 1799 on the strength of a handful of oil paintings, by 1800 he had a backlog of 60 commissions from patrons including the Earl of Essex and Sir Richard Colt Hoare. 'Lucerne with Pilatus beyond', Joseph Mallord William Turner.