: PS-Future. Invasive Species A Module in Planning for Sustainability About This Module: This module focuses on the role of non-native species in ecosystems. 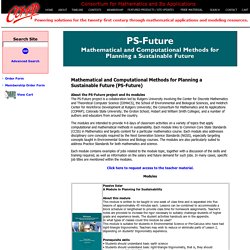 Students explore local examples of such species, including how and why these species become established in ecosystems. Then, after working through the concept of population growth and competitive exclusion, students work with a hands-on randomized simulation model to explore how the number of individuals of a nonnative (or an exotic) species population might influence the ability of that species to take hold and become invasive, doing damage to the ecosystem. A second deterministic model raises questions about how the spatial pattern of an invasion can impact the effectiveness of efforts to contain or slow invasive spread. Summary of Module Objectives: Lesson 1: The student will be able to define and describe invasive species and identify a local example of invasive species.

In what types of classes could this module be used? 9. Hare and Lynx Populations. Once students understand the concept of populations, it is important to introduce the idea of population change. 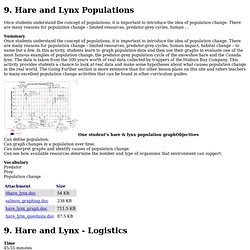 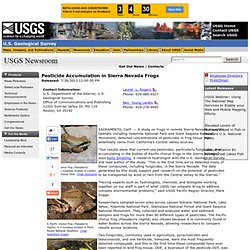 "Our results show that current-use pesticides, particularly fungicides, are accumulating in the bodies of Pacific chorus frogs in the Sierra Nevada," says Kelly Smalling, a research hydrologist with the U.S. Geological Survey and lead author of the study. "This is the first time we’ve detected many of these compounds, including fungicides, in the Sierra Nevada. The data generated by this study support past research on the potential of pesticides to be transported by wind or rain from the Central Valley to the Sierras.

Food Webs. Apps. Unit K: Dinosaurs - Lesson 7: Nature and Change. On this page - Encountering the Idea - Exploring the Idea - Getting the Idea - Organizing the Idea - Closure and Assessment - List of Activities for this Lesson BIG IDEAS:The story of the existence and extinction of dinosaurs tells us that change is a part of nature. 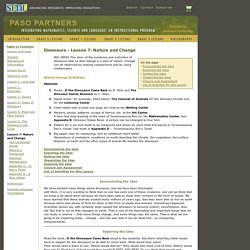 Change can be observed by making comparisons and by using mathematics. MaterialsBooks: If the Dinosaurs Came Back by B. Most and The Dinosaur Family Reunion by C. Allen.Taped music: for example, Saint Saenz' The Carnival of Animals for the Dinosaur Parade and for the Listening CenterChart tablet with at least one page per child at the Writing Center Markers, paints, patterns, scraps of fabrics, etc. at the Art Center A four-foot long drawing of the head of Tyrannosaurus Rex for the Mathematics Center. Interdependent Relationships in Ecosystems - Next Generation Science Standards. Sixth Grade Health of Ecosystems. MS-ESS3-3 Students who demonstrate understanding can: Apply scientific principles to design a method for monitoring and minimizing human impact on the environment. 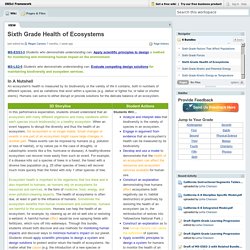 MS-LS2-5 Students who demonstrate understanding can: Evaluate competing design solutions for maintaining biodiversity and ecosystem services. An ecosystem's health is measured by its biodiversity or the variety of life it contains, both in numbers of different species, and as variations that exist within a species (e.g. darker or lighter fur, or taller or shorter stems).