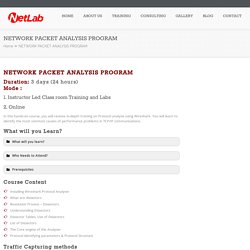 Instructor Led Class room Training and Labs 2. Online In this hands-on course, you will receive in-depth training on Protocol analysis using Wireshark. What will you Learn? What will you learn? Analyzing network packets since 2003. Forensic Packet Analysis. By Tim Dillman, Security Consultant, CISSP, CHP Preface In April 1965, Dr. 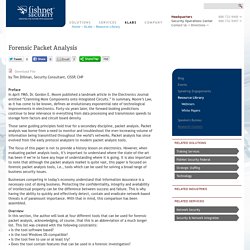 Gordon E. Moore published a landmark article in the Electronics Journal entitled “Cramming More Components onto Integrated Circuits.” In summary, Moore’s Law, as it has come to be known, defines an evolutionary exponential rate of technological improvements in electronics. Packet Analyzer. What is a Packet Analyzer? 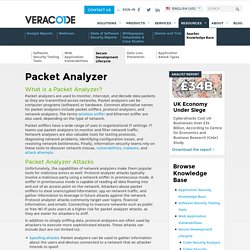 Packet analyzers are used to monitor, intercept, and decode data packets as they are transmitted across networks. Packet analyzers can be computer programs (software) or hardware. Common alternative names for packet analyzers include packet sniffers, protocol analyzers, and network analyzers. The terms wireless sniffer and Ethernet sniffer are also used, depending on the type of network. Packet sniffers have a wide range of uses in organizational IT settings. Packet Analysis 101 - Wireshark's Packet Details. Labels: packet analysis , Wireshark "The time has come," the Walrus said, "To talk of many things: Of bits-and bytes-and frame headers-- Of trace routes-and pings... 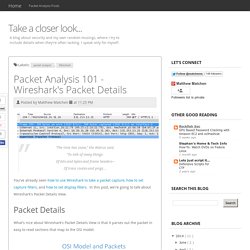 You've already seen how to use Wireshark to take a packet capture, how to set capture filters, and how to set display filters. In this post, we're going to talk about Wireshark's Packet Details View. Visual Analytics Workshop - Link Collection Part II - Data Sources. NEWS UPDATE! 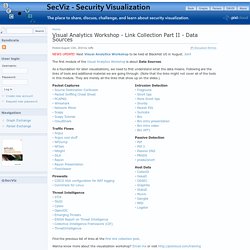 Next Visual Analytics Workshop to be held at BlackHat US in August. Join! Pravail® Security Analytics. Revealing attacks in real-time within your network Today’s breed of attacker uses stealthy and sophisticated methods to penetrate an organization’s perimeter. 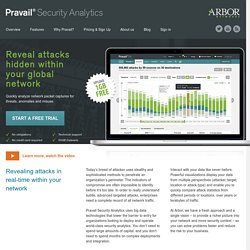 The indicators of compromise are often impossible to identify before it’s too late. In order to really understand subtle, advanced targeted attacks, enterprises need a complete record of all network traffic. Pravail Security Analytics uses big data technologies that lower the barrier to entry for organizations looking to deploy and operate world-class security analytics. You don’t need to spend large amounts of capital, and you don’t need to spend months on complex deployments and integration. Interact with your data like never before. TCP/IP Packet Analysis Course Online. "VTC" refers to Virtual Training Company, Inc. 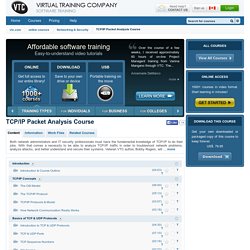 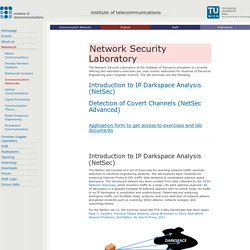 The lab explores basic methods for analyzing Internet Protocol (IP) traffic data destined to unassigned address space darkspace. The introduced dataset has been curated from data collected by the UCSD Network Telescope, which monitors traffic to a large (/8) dark address segment. An IP darkspace is a globally routable IP address segment with no active hosts. Link Graph Visualization. Savvius - Network insight for performance and security. Introduction to Network Trace Analysis Using Microsoft Message Analyzer: Part 1 - Ask Premier Field Engineering (PFE) Platforms. Hi folks, Lakshman Hariharan here again with the first of what my peers and I intend to be a new series of posts introducing how to read network traces using Microsoft Message Analyzer (henceforth referred to as MA) to go along with our Real World Example Series of posts, which can be found here, here and here in reverse chronological order. 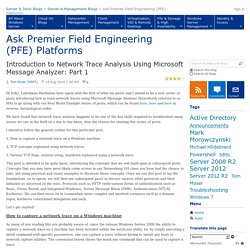 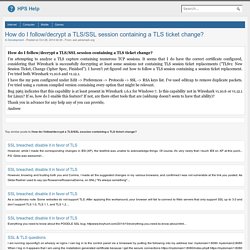 I'm attempting to analyze a TLS capture containing numerous TCP sessions. It seems that I do have the correct certificate configured, considering that Wireshark is successfully decrypting at least some sessions not containing TLS session ticket replacements ("TLSv1: New Session Ticket, Change Cipher Spec, Finished"). I haven't yet figured out how to follow a TLS session containing a session ticket replacement. I've tried both Wireshark v1.10.6 and v1.12.1. New great (free) tool : Microsoft Message Analyzer. R.I.P Microsoft Network Monitor, welcome Microsoft Message Analyzer ! As I was investigating all my issues, I tried to see if there was another tool to sniff low-level packets and interactions with the system. Wireshark is a good sniffer, but being multiplatform and portable limits its capabilities to network. I discovered that Microsoft had a new free product replacing their old (but still good) Network Monitor 3.4. It’s called Microsoft Message Analyzer, can be downloaded here, and seems to be quite interesting according to the dedicated TechNet blog and forums.

I didn’t have the time to test it fully, but I’ve read that it is able to handle a lot of new parsers, is able to do automatic tracing using PowerShell, and much more. Amongst the cool features : SSL decryption. Using the Decryption Feature. In addition to the many tools that Message Analyzer provides to filter, analyze, and visualize network traffic and data, Message Analyzer also provides a Decryption feature that can help you diagnose traces that contain encrypted Transport Layer Security (TLS) and Secure Sockets Layer (SSL) traffic.

Decrypting TLS/SSL traffic can be critical to troubleshooting network, protocol, performance, and connectivity issues. The Message Analyzer Decryption feature also resolves existing limitations of the Web Proxy message provider, such as the non-transparency of errors and the inability to capture other TLS/SSL encrypted traffic besides HTTPS. Note Please be aware that decryption of TLS v1.2 messages is also supported. The Message Analyzer Decryption feature enables you to view data for Application layer protocols that are encrypted with TLS/SSL, such as the HTTP and Remote Desktop (RDP) protocols. Network Analysis Unplugged: Tips. Some of the best free tools in life are the niche ones such as this nifty little utility available from the Yahoo!

Developer Network called YSlow (a nice play on Why Slow). You'll need to install Firefox along with the Firebug web development tool to run it, but it's definitely worth it. I'll first describe a controversial aspect of the tool, then get on to the interesting stuff. The Controversial Part YSLow will analyze a web page and assign a grade of A through F based on 14 criteria. You'll also get nicked for not using something known as "far future Expires header", GZIP components (even for small objects), and ETags.

Naturally, the Yahoo! Wirewatcher. The Spy Hunter, Part II is here. There’s an epilogue to the story here which will make more sense once you’ve read this post! As with last time, we had a good number of entries to the challenge. It was a very close call, but the winner this time is Jeff Gibat! Tcpdump for Dummies - Alex on Linux. In this article I would like to talk about one of the most useful tools in my networking toolbox and that is tcpdump. Unfortunately mastering this tool completely is not an easy task. Yet stuff you do the most is relatively simple and may become a good springboard when diving into more complex topics. tcpdump is a packet sniffer. It is able to capture traffic that passes through a machine. Hacking while you're asleep: How to create a GeoIP map report with Wireshark. We usually need to create an executive report when we are involved in an incident handling.

In these cases, a good option could be to include in it a world map with the connections which were established in the incident. Maybe we are interested in showing on a map where the command an control servers are hosted or for example to show which countries the distributed denial of service came from... Pcap.Net - Home. Packet Analysis - C# Why don't more people know how to do packet analysis? : networking. How to master Wireshark - AR15.Com Archive. Is there an online class or something that I can use to really get the hang of Wireshark? Pcap network analysis parsing tools. YAF — Documentation. Why does the world need another network flow event generator? Yaf was originally intended as an experimental implementation tracking developments in the IETF IPFIX working group, specifically bidirectional flow representation, archival storage formats, and structured data export with Deep Packet Inspection.

It is designed to perform acceptably as a flow sensor on any network on which white-box flow collection with commodity hardware is appropriate. yaf can and should be used on specialty hardware when scalability and performance are of concern. The YAF toolchain presently consists of two primary tools, yaf itself, and yafscii. The YAF applications require the libairframe and libyaf libraries, which are included and installed as part of the YAF distribution. libairframe installs two additional tools, filedaemon and airdaemon. libyaf implements YAF file and network I/O, and contains YAF packet decoder, fragment assembler, and flow table.

Protocol Analysis SDK. Documentation. Wireshark Training. LoveMyTool - Building an Open Community for Network Management and Monitoring. Packet Analyzer: 15 TCPDUMP Command Examples. Tcpdump command is also called as packet analyzer. tcpdump command will work on most flavors of unix operating system. tcpdump allows us to save the packets that are captured, so that we can use it for future analysis. The saved file can be viewed by the same tcpdump command. CAPTCP - TCP Analyzer. This tutorial demonstrate how captcp outperform wireshark for TCP flow analysis. This tutorial focus on throughput analysis for a specific TCP flow. 1.6 Reading pcap files. Next: 1.7 Basic Output Up: 1. Playback - Replay UDP Packet Capture.

Wireplay - The TCP Session Replay Tool. A minimalist approach to replay pcap dumped TCP sessions with modification as required. The aim of this project is to build an usable but simplistic tool which can help in selecting the TCP session to replay. It can play both client as well as the server during a replay session. Obviously replay attacks doesn't work against protocols which are cryptographically hardened or implements protocol specific replay prevention mechanism like challenge/response etc. Wireplay implements a plugin/hook subsystem mainly for the purpose of working around those replay prevention mechanism and also perform a certain degree of fuzz testing. Current Features. Tcpreplay. Interpreting the packets. Pcap Parser and Utilities. Pcap-parser. Learn How To Hack - Ethical Hacking and security tips: HTTPS Cracked! SSL/TLS Attacked And Exploited. Supportability Statement: LabTech and SSL 3.0 POODLE Vulnerability.

The Best and Most Popular Meta Search Engines.